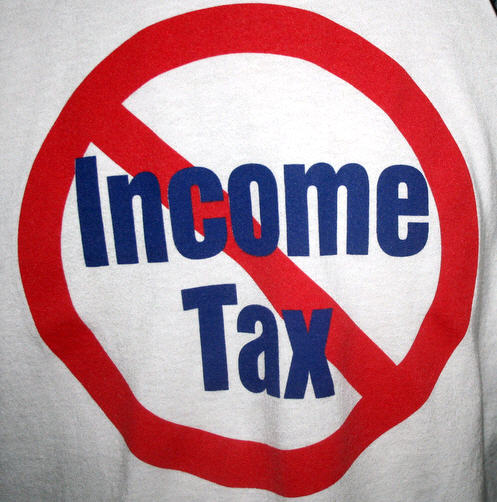 In another phony display of outrage, leftists and whack-a-doodles are demanding Mr. Trump release his taxes.  Trump promised to release them.  Then, before the election, he said he wouldn’t do it.  America elected him anyway.  The issue on Trump’s taxes is closed.  Get over it.  For those of us who pay taxes, we are more interested in tax reform to lower our burden.  President Trump, release me from taxation.

From our founding until 1913, this country survived without the income tax.  It is no surprise that the idea of state-forced, state-mandated, income taxes was foisted on Americans during the rise of the progressives.  No era more profoundly transformed our liberty than when this country abandoned state appointed representation to the US Senate, and the Federal government flexed its muscles and imposed a federal tax on the labor of her people.

President Trump ran on one slogan, “Make America Great Again.”  To do that, let’s free Americans from the yoke of the mandatory income tax.  If you want to drain the swamp, we should strip Congress of the power to tax our labor, and boot K Street lobbyists to the curb by cutting them out of the tax reform process that picks winners and losers.  In every pick, they choose to make the working man the loser.

Leftist obsession with Trump’s taxes comes from the leftist philosophy the rich have stolen the wealth of the country and carved it up for themselves.  When the rich don’t pay their “fair share,” it’s called stealing.  When the left doesn’t pay taxes, it’s called being oppressed.

We need to unplug the Federal government from the power of mandatory taxation on labor.  We need to ween Americans off the false, anti-American idea that any man owes a greater share of contribution to our country than another. That’s a lie.

If Americans wanted to know just how big government really is, and how much each of us is free-riding on the backs of others, our government would simply send a bill to every American.  That bill would not be based, as it is now on some Marxian philosophy.  We would not demand that each pay according to his or her ability, and that the government then transfer the balance to others according to their need.  That’s what we have now.

Now, of course this analysis is hyperbole, if only because we tax corporations, and we do have other forms of taxation that shift a bit of the burden, in theory from individuals.  But we also have FICA, which isn’t even counted in this equation.

The point is simple, we have a government that is too big, and we have too few people paying for it.  Because they don’t pay, they really don’t give a damn what anyone else pays.  Likewise, the free-riders need the payors to pay more, and hence this idea of capturing another man’s wealth for one’s own use sure sounds appealing … to a free rider.

For me … I want my federal tax dollars back.  I want to be released from this bondage.  I am happy to pay for my fair share of government.  Let me decide what the size and share should be.  Likewise, stop taxing my productive labor.  Tax instead my use and consumption of resources. Then, I control the point of taxation, and the amount of my taxation.  That sounds a lot more American to me.

Likewise, consumption taxes eliminate the free-rider problem.  In fact, the left despises the idea that some people “don’t pay taxes.”  They often point out that these people pay sales taxes, or even property taxes through rent charged to them.  Why is this ironic?  It’s ironic because the left thinks consumption taxes are fine for those who don’t pay income taxes.  They think it is theft, however, for a wealthy person not to pay income taxes too.

Unleash liberty, and free me from my mandatory taxation.  Embrace American principles, and let liberty determine a man’s tax rate.  Increase the incentives for productivity and investment, and make everyone a contributor.  Likewise, force government to retract.  Make is smaller, smarter, and more efficient, based on the willingness and ability of her people to pay for it.

It’s #taxday2017. Let’s make it about our taxes, and not President Trump’s taxes. He won the election, and that was more about our taxes than his. Give us liberty from this servitude.