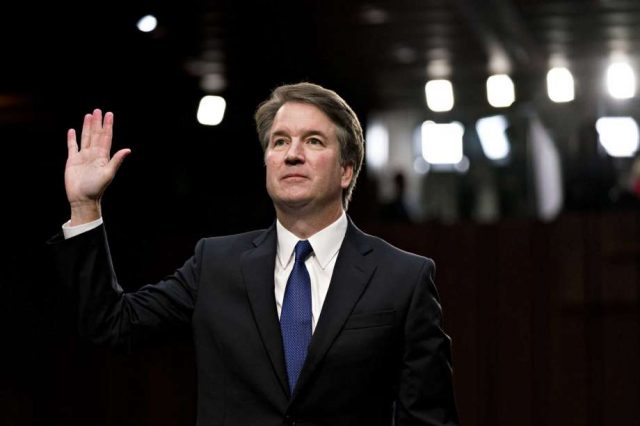 You’ve already read the headline, so let’s get straight to it:
1. In America, an accused is innocent unless proven guilty, and the burden of proof lies with the accuser, not the accused.
.
2. Neither Judge Kavanaugh nor any other American ever has any burden to disprove an accusation under our American principles of justice.
.
3. Despite efforts by the left to change this, our principle of innocent unless proven guilty does not change when the accused is a man accused of sexual misconduct by a woman.
.
4. No one ever should be expected to defend against accusations that lack credibility on their face.
.
5. The accusations against Judge Kavanaugh lack any credibility on their face.
.
6. Judge Kavanaugh, whose honesty is beyond dispute, says he has never met his accuser, and he and everyone else involved say he did not even attend the party where the incident was alleged to have occurred. In fact, no one anywhere has corroborated the accuser’s allegation that he was at that party – or even that the party actually occurred.
7. The conduct alleged against Judge Kavanaugh also is utterly inconsistent with anything he has ever done or said in his entire life, and not one single person who has ever known him has come forward to say otherwise.
.
8. In addition, when considering the credibility of an accusation, it is fair, and indeed necessary, to consider the credibility of the accuser.
.
9. Despite efforts by the left to change this, the credibility of the accuser is relevant to the credibility of the accusation even when the accusation is of sexual misconduct.
.
10. Judge Kavanaugh’s accuser is a life-long left-wing pussy-hat-wearing partisan Democrat activist.
.
11. The accuser’s attorney is the Vice President of a George Soros-funded organization that is leading the fight against Kavanaugh’s confirmation.
.
12. The Senate Democrats have known about this accusation since at least early summer and strategically waited to use it as an 11th-hour surprise when it was clear that Kavanaugh was going to be confirmed.
.
13. Their claim that they sat on the accusation because the accuser wanted to remain anonymous lacks any credibility given that she claims to have taken a lie-detector test last month and that she sent a letter to a U.S. senator two months ago as soon as Kavanaugh was nominated. Who does these things while sincerely wanting and expecting to remain anonymous?
.
14. The Democrats have used this exact same tactic before. It’s right out of their smear-the-nominee playbook. (Given this fact, it is entirely reasonable to wonder whether they concocted this whole scheme in the first place.)
.
15. The timing, context, and fact that the accusation is inconsistent with anything in Judge Kavanaugh’s entire history render the accusation utterly lacking in any credibility on its face.
.
16. It is therefore both wrong and unjust to expect him to defend against this utterly incredible accusation.
.
17. Furthermore, the accuser volunteered to testify publicly about her accusation – until the Senate committee took her up on her offer yesterday. Since then (as of this writing), according to committee chairman Sen. Charles Grassley, she has declined to return any of their calls – even with them now (inexplicably) offering to allow her to testify in closed session.
.
18. Judge Kavanaugh is presumed innocent, and both the accusation and the accuser against him lack the slightest modicum of credibility.
.
19. It is unjust to expect him to defend against such incredible accusations from such an incredible accuser.
.
20. Accordingly, Monday’s hearing should be cancelled, and the Senate should vote immediately to confirm his nomination – and to formally apologize for the despicable way they have treated this good and decent man.
.
Update: The accuser has now demanded that the FBI investigate her accusation before she’s willing to testify before the Senate committee. This is further evidence of her utter lack of credibility. She knows the FBI is not going to investigate her completely unsubstantiated allegations of events that she claims occurred 35 years ago. However, the Senate Democrats’ strategy to defeat Kavanaugh has been delay, delay, delay. The fact that the accuser has now employed the exact same strategy to avoid testifying is incredible – and I use that word literally.
.