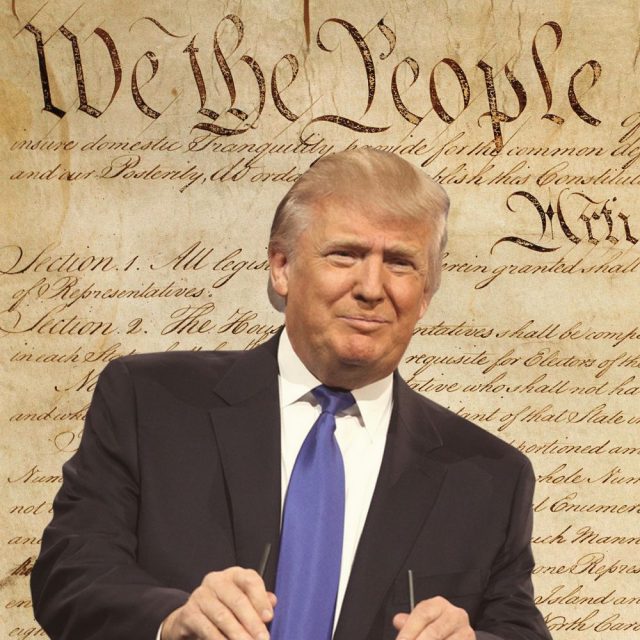 At the end of the period, Mr. Mueller and his entire team should be dismissed. Behind them, President Trump should dismiss Rod Rosenstein and Jeff Sessions.

The Attorney General of the United States works for the Executive too, as do all his various deputies, right down to the custodial staff. Whatever labyrinth of administrative law this country has built, not one bit of it is equal to or supersedes the powers of the executive.

That administrative hearing you want for being fired … you just had it with the chief executive.

Unless you have a hidden Constitutional Amendment, the President does not answer to inferior officers subordinate to him.  It’s in the Constitution.

Mr. Mueller, thank you for your service and the report you have issued at my direction. Good luck in your future endeavors. You sir, are dismissed.

None of this makes the President above the law. Quite the contrary. He is has all and only the law and powers granted him by the only document that matters in our legal scheme. All others are inferior, including Supreme Court Opinions, which hold no greater weight of constitutionality than the co-equal branch of the executive.

If the President has acted outside the law, he may be impeached. That is the legal remedy against the President. There is no other. Once removed as President, whatever actions he committed that might be eligible for criminal penalty, then may be brought.

Other than that, removal of a sitting US President is by election … not be a deep state, administrative state, inferior-officer investigation.

Others may say Trump would be setting off a “Constitutional Crisis.”  That’s hogwash. The Constitution isn’t in crisis, the country is in crisis. The Constitution says what it says, and it grants the powers it grants. If the House wants to impeach the President for firing an inferior officer, bring it on. Make the case, and then get 67 Senators to vote that way in a trial.

That is never going to happen.

This entire investigative charade is designed merely to weaken the President politically to elect a new Congress and ultimately remove the President by election. This is a game the President ought not to play. If the deep state wants him removed, make Congress do it. Force them to impeach and remove. They can’t even pass a transportation bill.

Congress is removing nobody.

Trump should fire Mr. Mueller, among others, exactly as I first said so just weeks after Mueller’s absurd appointment.

He should fire the feckless Jeff Sessions and the deep-state swamp creature Rosenstein too.

If Mr. Trump wants an Attorney General who understands how the Constitution works and is fearlessly unopposed to defending it, he should ask Alan Dershowitz to serve as AG. His opinion is the same as my own, and indeed completely correct.

Whatever it is that Congress claims to do between fundraisers and being openly bought by lobbyists, it can get back to doing. It won’t be impeaching anyone.

Mr. Trump can drain one-third of this swamp immediately by taking back control of the Executive powers granted him … which are now being held hostage by the administrative state the executive is empowered to control.