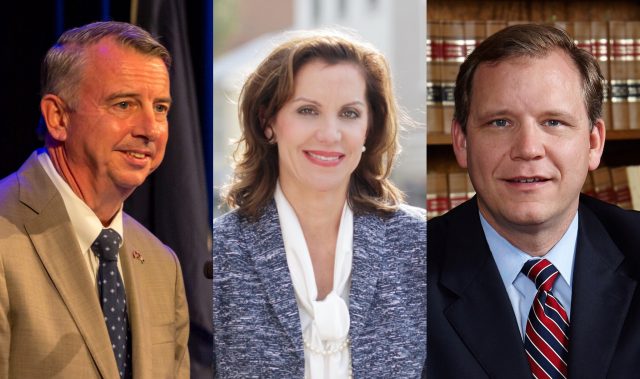 Here are two important reasons why that matters:

1. I have been very vocal about how, after 30 years as a loyal Republican, I came to realize that the Republican Party left me. The Republicans have become primarily a nationalist cult of personality that is systematically purging mainstream conservatives with standards of decency from its ranks. However, the Virginia Republican ticket is a breath of fresh air and represents the best that the party has to offer.

2. The Democrat candidate for Governor of Virginia, Ralph Northam, saved my son’s life, and I made a personal vow that I would never publicly criticize him no matter how much I disagree with his politics. However, he and his campaign have sunk so low in their attacks on the Republicans that I can no longer in good conscience keep that vow.

My son Josh was born with numerous very serious medical problems and was in the hospital for over a year after he was born. One of those problems was a condition called infantile spasms, a neurological condition that is often fatal in infants.

Ralph Northam is a pediatric neurologist and was Josh’s doctor. He treated Josh for his infantile spasms by putting him on a rare medicine that ended up resolving his condition.

In short, Dr. Ralph Northam saved my son’s life five years ago, and so I made a vow to myself never to publicly oppose him politically.

At the time this was happening (2011-12), Ralph was a Democrat state senator representing Norfolk. He was a moderate who very nearly switched parties and became a Republican. (Ralph has denied that this happened, but I know the whole story from an impeccable source. It is absolutely true.) Although I was a Republican at the time, I found Ralph to be reasonable and, for a Democrat, politically unobjectionable.

All of that began to change four years ago when Ralph ran for Lieutenant Governor on a platform centered on making abortion as widely available as possible. I found it to be very distasteful that a medical doctor would center his campaign on callously disregarding the value of the lives of unborn babies across the Commonwealth. (If he had gone through with becoming a Republican, would he have run on a pro-life platform?) But I stayed true to my vow and refrained from commenting on that race. (It helped that I also couldn’t support Republican candidate E.W. Jackson, an extremely vocal anti-gay bigot in the mold of Roy Moore. I made no public endorsement and ended up writing someone in for that race.)

This year, when Ralph won his party’s nomination for Governor, I told my colleagues here at Committed Conservative about my vow and that I was not going to write about this race. And I meant it. (Rich Kelsey has done a great job of carrying that torch without me!)

Sadly, the campaign being waged by Ralph Northam and his Democrat allies this year has become so reprehensibly sleazy that I have decided that I must break my vow. Ralph Northam saved my son’s life, so it breaks my heart to say this about a man whom I love and appreciate from the depths of my heart, but his campaign has sunk lower than any other political campaign that I have seen in my 30 years of political activism.

The final straw for me was the ad released yesterday by Northam’s Democrat allies (a Soros-funded group pretending to be a Hispanic political action committee). In the ad (which I will not dignify by linking to or embedding into this column), Republican Ed Gillespie’s campaign is portrayed as white supremacists driving a pick-up truck trying to run down and kill various non-white children.

Politics is a contact sport, and I have seen some pretty offensive ads in my time, such as the 2012 one portraying Republican Congressman (now Speaker) Paul Ryan pushing “grandma” over a cliff in a wheelchair. But in 30 years I have never seen anything as despicable as this.

Granted, it was not Northam’s campaign that ran this ad, but he and his campaign have embraced and defended it, just as Northam authorized a flier sent out by the Democratic Party of Virginia last week falsely and perversely linking Gillespie and his campaign to white nationalists. And all of this was an especially cynical and slimy move by a man who recently photoshopped his African-American running mate out of the photos in his campaign literature.

I no longer recognize the good man who saved my son’s life. Dr. Northam has sacrificed his soul to candidate Northam, and I cannot in good conscience remain silent while he engages in a campaign of reprehensible and sleazy race-baiting defamation of his opponents.

Fortunately, Virginians have an honorable alternative, and it is easy for me to endorse and embrace this year’s Republican ticket. Ed Gillespie, Jill Vogel, and John Adams are all mainstream conservatives of the highest character who would serve the people of Virginia with honor and distinction. Although I am no longer a Republican, I am heartened by the emergence of this ticket, which represents the best of what the Republican Party has always been. I am proud to endorse and support them.

Ralph Northam and his allies just made a whopper of an unforced error. The flier and ad released in the past few days is so over the top offensive that I predict that it will cause a backlash in the Republicans’ favor. Rank-and-file Virginia voters will be offended that the Democrats think they’re stupid enough to believe that Ed Gillespie and Republicans generally are murderous white supremacists. I predict that this flier and ad will cause undecided voters to decide to support the Republicans and will dramatically increase the motivation of Republican voters to get to the polls on November 7th.

Whether the backlash will be enough to overcome the Democrats’ built-in advantage in Northern Virginia remains to be seen. But if the Republicans win, it should be a wake-up call to the Democrats, who have stripped themselves of any standards of decency whatsoever. On a more personal level, though, I hope it will shock one particular doctor who earned my eternal love and appreciation back into being the person of high character that he used to be.