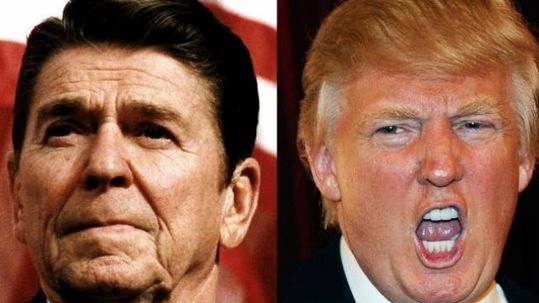 This morning I listened to President Trump deliver a speech to the United Nations that was profound, brilliant, and historic. It was a moment that made me proud to be an American and a Republican. When Trump sticks to the script, he is amazing.

Unfortunately, however, history has shown that it won’t be long before he tweets or says something off-script that reflects his true spiteful and contemptuous nature and that will dramatically undermine what he did today. Whether it’s making disgusting misogynist attacks on female journalists or sending out tweets of simulated violence against his perceived enemies, boorishness is Donald Trump’s nature, and the current Republican base is perfectly fine with that.

And one well-delivered speech does not offset the multiple ways in which this president continuously debases his high office and embarrasses our country – and it doesn’t change how the Republican base revels in delight at his crudity.

So, after 30 years of stalwart support, activism, and advocacy for the Republican Party and its candidates, I now accept a painful fact: My party has left me.

I became a Republican in the mid-1980s when I was a young soldier in the U.S. Army. I had graduated high school as an idealistic liberal, properly indoctrinated by my liberal public school teachers. Four years of service under Commander-in-Chief Ronald Reagan showed me the way the world really works, and by the time I finished my tour, I was a rock-ribbed Republican.

Ronald Reagan inspired me. He saw America as a “shining city on a hill.” He believed we were great because we were fundamentally good. He spent decades fighting for his conservative American constitutional principles before ever seeking public office, and by the time he became president, everyone knew exactly who their president was and what he stood for.

Reagan spent his eight years in office restoring our national pride after inheriting a post-Vietnam/Watergate/stagflation/Iran-hostage American funk. He believed that the free enterprise system would restore our economy, and he proved it. He believed that America’s goodness and resolve could defeat the Evil Empire led by the Soviet Union after more than 40 years of cold war, and he proved it.

And through it all, as Reagan actually made America great again (rather than just using those words as a xenophobic slogan), he did it with a twinkle in his eye, a smile on his face, and a patriotic song in his heart. He took on his opponents not with anger and paranoia but with humor and wit, and he inspired his party and country by explaining in his folksy and crystal clear manner why his committed conservative ideas were the right ideas for our country and, indeed, the world.

People followed Reagan’s lead not out of a cultish devotion to the man but out of an inspired belief in his ideas.

And so, as one of those millions of inspired Americans, I spent the next 30 years supporting the party that promoted the great ideas of this great man. I worked to elect like-minded people to office and to keep my country strong and vibrant through the power of our tried and proven conservative principles.

In the early ’90s, I worked for Republican members of the Virginia House of Delegates both by managing their campaigns and by serving as their legislative aide. I helped George Allen win an underdog victory to become a young, energetic, principled Jeffersonian conservative Governor of Virginia. And I helped the Republicans gain majorities in the Virginia General Assembly for the first time since Reconstruction.

I helped Newt Gingrich and my party win control of the House of Representatives for the first time in 40 years on a platform of principled Reaganesque conservatism. I went to work as a legislative assistant to a Republican member of the U.S. Senate and fought to hold majorities in Congress and advance a long string of principled conservative policy successes despite a liberal Democrat holding the presidency.

And, consistent with my party’s values of decency and honor, I worked from within the Senate to hold that president accountable for his crimes.

I worked to elect a Republican president in 2000 and supported that new president’s efforts to pass the largest tax cut in history and to fight international terrorism. I joined 92% of my countrymen in standing with that president as he healed and unified a shocked and traumatized country just eight months into his presidency.

And in that Republican president’s second term, I openly expressed my frustration at how he allowed the Democrats and their “news” media allies to take over the national narrative and steal the national agenda.

I fought unsuccessfully to defeat the leftist ideologue who succeeded him, and once he took office, I fought tooth and nail against his efforts to impose socialist policies on our heretofore free country.

I used social media, I blogged, and I became a part-time talk-radio host to fight for our conservative principles and values against the leftist onslaught from that president and his “news” media sycophants.

Through it all, through good times and bad, through times when our party was on track and getting things done and times when we lost our focus, I remained a loyal and true Republican, fighting the good fight to keep our country strong and free for future generations.

Well, times have changed, and, sadly, that Republican Party no longer exists.

The Republican Party today is divided between two equally detestable factions. On one side is a spineless and unprincipled establishment that cares about getting reelected over trying to advance conservative policies. On the other side is a base that has become a cult of personality that exists to support and assist in the self-aggrandizement of an unprincipled boorish celebrity egotist who has no understanding of conservatism but managed to co-opt my party’s nomination (much like Howard Stern did with the Libertarians some years ago).

This is a party in which the incumbents refuse to pass any good legislation because they don’t want to be associated with a president they despise.

This is a party that is led by a president who wakes up every day deliberately finding new and more creative ways to offend the sensibilities of good and decent Americans.

This is a party with a base that cares more about giving blind support to that petulant juvenile president for as long as he entertains them with his hateful taunts of everyone who crosses him than actually passing a principled conservative policy agenda to save this country from the wreckage left by the last president.

Ronald Reagan would not recognize this Republican Party. He would be appalled and thoroughly disgusted with what has become of the party that he led to greatness propelled by ideas, principles, values, optimism, and love for our country and her people.

I am a Reagan Republican. I don’t believe in Trump’s version of “greatness” defined by tearing people down by spreading fear and hate. Like Reagan, I believe in the inherent goodness and greatness of my country and her people.

And that is truly tragic. A principled and honorable Republican Party is needed today more than ever to combat the radical, hateful, and violent socialist party that the Democrat Party has now become. Sadly, that Republican Party no longer exists.

I’m still the same person, with the same conservative constitutionalist principles and standards of decency and honor that I have held for the past 30 years. I’ve grown older and, hopefully, a bit wiser, but at my core, I haven’t really changed much during that time.

My party has changed though … Bigly. And it has now left me.

I cannot remain a member of a party that stands against everything but stands for nothing. I cannot be a part of a base that is impassioned by their Leader about seeing their perceived enemies humiliated at the cost of getting anything done to actually restore this country to true greatness based on principles, values, and human decency.

The great party of Ronald Reagan has devolved into the disgraceful party of Donald Trump – a party that has contempt for the basic values that we used to hold dear.

That is not my party.

And so, today I accept the fact that my party has left me and I am no longer a Republican.

I will also, of course, continue to vigorously oppose the Democrats and other leftists who are now dangerously radicalized and filled with hate for the fundamental values on which our country was built.

As a committed conservative, I will continue to focus on advancing conservative ideas, principles, and values. But now I will do so liberated from an unprincipled and spiteful party.

I will still compliment and promote President Trump when he’s advancing conservative policies in a civilized manner, but I will continue to call him out when he acts in a manner that embarrasses my country and pollutes our culture.

I will continue to oppose the leftist threat posed by today’s Democrat Party and its adoring lapdog “news” media, but on the rare occasions that any Democrats do something that is beneficial to our country and people, I will give credit where it’s due.

In other words, I will continue to be an independent-minded committed conservative

I still believe in our two-party system, and I pray that someday it will be restored to good health. America needs a party focused on restoring to our country the conservative principles and values that already made America great, and if the Republican Party someday returns to that vision and mission, I will consider returning to the party.

One thing I will never do, however, is compromise my principles and standards of honor and basic human decency. Sometimes party loyalty demands too much.