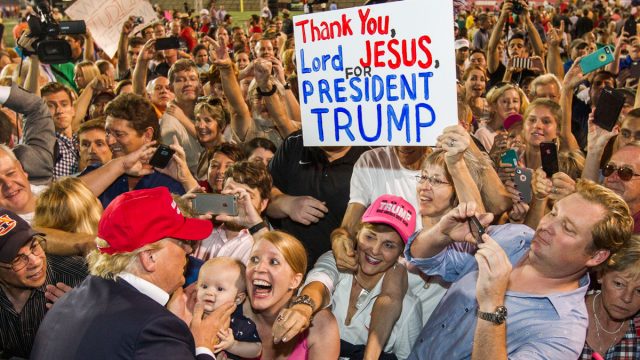 I am deeply frustrated with President Trump because I support him and want him to succeed, but the yes men surrounding him are preventing that from happening.

I support Trump’s efforts to repeal and replace Obamacare, lower taxes, build a wall to stop mass illegal immigration, and restore America’s standing as the world’s only superpower.

It is an unchangeable fact that the Democrats and their loyal allies in the establishment “news” media will do whatever it takes to stop him from achieving these objectives.

The only way Trump can overcome such intense and hostile opposition is to go over their heads directly to the American people and earn their support.

This is a difficult, but not impossible, task. Ronald Reagan faced an equally hostile “news” media as well as a Democrat majority in the House of Representatives, but he managed to get most of his agenda passed by earning and engaging the support of the American people.

Donald Trump – who, unlike Reagan, enjoys Republican congressional majorities in both houses – is doing the polar opposite and getting nothing passed.

Instead of touring the country holding rallies and giving speeches to sell his agenda, Trump is taking actions and making statements that create the impression that he’s covering up corruption.

Now, I don’t believe that Trump is corrupt or that he has anything to hide. But he’s making it awfully hard to defend him from such charges.

Yes, James Comey was politically self-serving and incompetent, and yes he deserved to be fired. But Trump fired him in the manner most likely to create comparisons to President Nixon’s infamous “Saturday Night Massacre.”

Instead of making a formal announcement that he was firing Comey with an explanation as to why, Trump just did it and let his opponents craft the narrative.

Trump and his staff actually thought the Democrats would side with him and praise him. It never occurred to any of them that the Democrats and their lapdog “news” media would spin the story to make it appear that Trump was trying to thwart an investigation into their politically contrived allegations of collusion between his campaign and the Russians last year.

And therein lies the problem: Trump lives in an echo chamber full of yes men who tell him how great he is and shield him from criticism.

Worse, Trump insists on living in that echo chamber and won’t tolerate criticism.

And so, he takes actions and makes statements that normal people living their normal lives find at a minimum to be bizarre and at worst to be insane.

This is emphatically not how to earn the support of the American people.

After bungling the firing of Mr. Comey, Trump doubled down by sending out his surrogates to give four or five different – and contradictory – accounts of his reasoning, and then he gave a personal interview in which he personally contradicted all of them.

Then he sent out tweets threatening Comey and attacking those who criticized his surrogates for giving those contradictory accounts.

Trump couldn’t have handled the firing of James Comey any worse if he’d had Chuck Schumer coordinate it.

Now, just as Trump’s bungling of the Comey matter has given new life to the allegations of collusion between his campaign and the Russians, the Washington Post reports that Trump deliberately gave highly sensitive top-secret codeword information to the Russians – information that was so sensitive that it had not even been shared with our allies.

And once again, the Trump administration is giving contradictory accounts of what happened. Last night, National Security Advisor H.R. McMaster denied that it happened. Trump sycophants like Sean Hannity ran with that account and accused the Post of putting out “fake news,” and Trump’s blind supporters dutifully repeated that theme all night long on social media.

Then, this morning, Trump himself sent out tweets admitting that it did happen and defending his release of this top secret information to our Russian adversaries as his “absolute right.”

So once again, to the majority of the American people, Trump looks incompetent at best and corrupt at worst.

So Trump still doesn’t know how deep a hole he’s dug for himself in terms of his credibility with the American people because he still lives in an echo chamber surrounded by yes men with a base of sycophantic supporters continuing to blindly defend him.

If Trump is going to accomplish any part of the agenda that conservatives like me would like to see accomplished, he is going to have to get rid of the yes men and start living in the real world.

And that means his loyal followers across the fruited plain need to stop blindly defending him and force him to put on his big boy pants and face reality.

Trump sycophants argue that since he defied conventional wisdom last year and won an election that everyone predicted he couldn’t win, he’s a proven genius whose every utterance is brilliantly calculated to continue his success. We mere mortals are just too pedestrian to grasp his secret strategy.

News flash – Donald Trump won last year for one reason and one reason only: His opponent was the most repulsive major-party nominee for president in American history. She was corrupt to her core, had no charisma, no humanity, and no record of accomplishment. She was never able to articulate any rationale for her candidacy other than that it was her turn because she’s a woman.

Frankly, Donald Trump was just about the only Republican who stood any chance of losing to Hillary Clinton. Most of the other Republican candidates would have cleaned her clock.

And, in fact, Trump did lose the popular vote – by a margin of three million votes. He won the presidency only because those three million American voters happened to be compressed into two states (California and New York). It was the Electoral College version of gerrymandering.

To be clear, I voted for Trump, and I’m delighted and relieved that he beat Hillary Clinton. And, again, I support his agenda and want him to succeed in realizing it.

But the only way that is going to happen is for Trump to recognize that, while he continues to enjoy strong support from his core base, that base makes up only about one-third of the American people.

In order to get anything done, he is going to have to earn the support of a lot more people who are currently skeptical of him at best and repulsed at worst.

I criticize Trump not because I oppose him. I do so because I support him and want him to succeed. Feeding his delusions of grandeur does him a grave disservice by keeping his head firmly planted in the sand.

Donald Trump is his own worst enemy, and his blind supporters are his collaborators in keeping him and his agenda from succeeding.

The only way President Trump is going to succeed in restoring our country, the only way he is ever going to Make America Great Again™, is for him to stop alienating the very people whose support he needs.