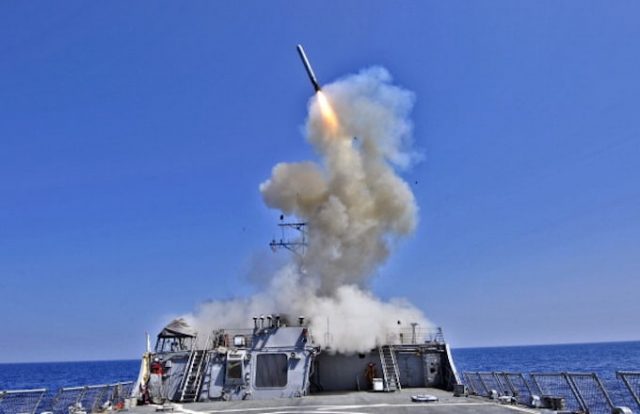 President Trump’s missile strike on Syria yesterday was about much more than Syria.

The specific and immediate objective of the strike was, of course, to retaliate against the Assad regime for its atrocious use of chemical weapons against his own people, including innocent women and children.

But the strike sent a much broader message.

It told the world that the days of America apologizing for supposedly causing all of the world’s evils are over.

It also told the world that the days of an American president drawing red lines that petty dictators can ignore without consequence are over.

And it told Russian President Vladimir Putin that the United States is neither impressed with nor intimidated by its repugnant alliance with and sponsorship of the murderous regime of Syrian President Bashar al-Assad.

Furthermore, it was no coincidence that this strike was made on the day that Chinese President Xi Jinpeng arrived in the U.S. for meetings with President Trump.

North Korean tyrant Kim Jong-un has been taunting the United States and the world with illegal and dangerous missile launches that threaten South Korea, Japan, and the United States. China is North Korea’s most important ally and protector.

This strike on Syria during the visit of President Xi put both China and North Korea on notice that the United States is willing to take military action if Kim continues his illegal acts of belligerence.

Many Democrats, some libertarian-leaning Republicans, and many in the news media claim that Trump’s action was unconstitutional because “only Congress can declare war.” This argument is not only wrong; it is ridiculous.

Furthermore, contrary to the knee-jerk “analysis” of many Democrats and their loyal news media (as well as some libertarian-leaning Republicans), President Trump’s bold and decisive action yesterday will not further erode stability in the Middle East. In fact, his action was a strong step toward restoring stability to the world.

The greatest period of world peace over the past century was the 1980s, when U.S. President Ronald Reagan and British Prime Minister Margaret Thatcher made clear that they would take forceful military action against anyone who threatened their countries’ interests. This doctrine of “peace through strength” proved enormously effective as there were no major global conflicts during that time.

Contrast that period with the past eight years of President Barack Obama. He began his presidency with a tour of the world to blame his own country for many of the world’s problems and apologize for our transgressions. He subsequently entered into an agreement with Iran that paved a path for them to gain nuclear weapons, drew a “red line” warning Syria not to use chemical weapons and then failed to take action when Syria crossed that line, stood by passively as North Korea developed nuclear weapons and began routinely to violate international laws with acts of belligerence, and threw loyal American allies like Israel under the bus to appease terrorist-sponsoring dictators.

So, we can readily see the result of Obama’s incompetent and naive leftist policies: A world in chaos.

Global stability is achieved when a major superpower demonstrates its willingness to use its power to enforce stability. President Trump understands this truth, and yesterday he acted to implement it.

President Trump also demonstrated that, far from being the impotent clown portrayed in the Democrats’ loyal news media, he is the President of the United States, with all of the powers and responsibilities inherent therein. Yesterday President Trump demonstrated that he is ready and willing to use those powers when necessary to serve his country’s interests.

Thanks to yesterday’s action by President Trump, the entire world now stands on notice. The days of U.S. passivity in the face of fascist aggression and human atrocities are over. We are back, and the world will be the better for it.