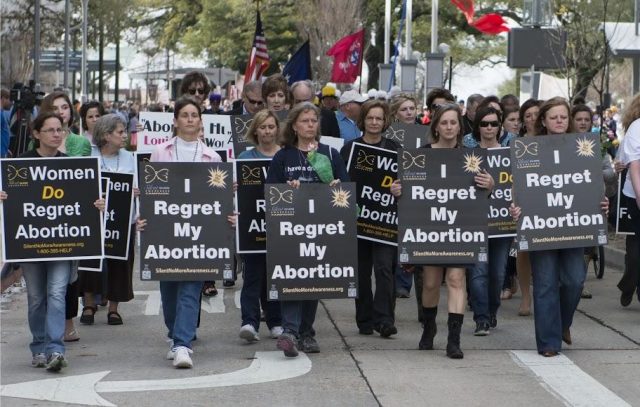 In Washington DC and around the country, survivors of the abortion culture will march today for life.  These men and women will not be dressed in vagina suits.  They will not be screaming obscenities, and they will not be holding signs spewing hate.  They will be standing up for nearly 60 million aborted American babies.  The carnage is unimaginable.  American women, since the poorly reasoned legal decision of Roe v. Wade in 1973, have killed more innocent, defenseless children than Stalin killed in people in his reign of terror.  The infanticide has been more deadly that Hitler’s reign of terror.  The numbers are staggering.  For too many women, justifying abortion has become an exercise in science denying, wrapped in a bogus equal rights argument, motivated by a crumbling moral culture.  The carnage of abortion has not just been measured in children killed.  Abortion has made us more coarse, more angry, and more divided.  It has devalued life, it has wrecked families, and it has been the principle catalyst in a moral decline where we continue to define deviancy down.  Innumerable people today will write exclusively of the human toll and our moral decay wrought by this cultural cancer.  Today, however, we cannot ignore what the legal decision of Roe v. Wade did to our Constitutional Republic, federalism, and all of our rights.

There is no federal Constitutional right to abortion.  That is undisputed.  Read the Constitution.  In 1973, an activist Court wrote a nearly 85 page opinion creating a right that did not exist in a 15 page document.  That was bad enough; but to do so, the Court had to ignore and render lifeless the 10th Amendment.  It is undisputed that the Constitution neither permits nor prohibits abortion.   And to be sure, the rights of the people under the Constitution were meant to be infinite, while the rights and obligations of the Federal government were meant to be few and narrowly defined. The Constitution never meant to set out all the rights that free people enjoy, for it could never do so.  The Founders recognized this, and indeed they agonized over how to convey this reality.  Some were even concerned that by creating a Bill of Rights, we were actually limiting rights solely to those enumerated.  That is exactly why the Founders created the 10th Amendment.  It is and has always been the job of the people, through their duly elected state representatives, to secure for themselves as they deemed necessary the rights and protections not in the Federal Constitution.

While Conservatives often are heard to speak of limited government, the reality is that the Constitution only considered limitations on a powerful federal government.  Nothing technically or legally limits the right of the people in the states to create laws and government of a size and type that the people want in each state.  Indeed, while most conservatives might think a large, unwieldy state government is unwise and inefficient, if the people in a state so seek that arrangement, they may do so.  State governments … and by that I mean her people … are only limited in the laws they can make by conflicts with the Federal Constitution.  As an easy example, a state could never make a law that treats a person differently under the law based on his or her color.  That’s in the 15th Amendment. Likewise, law making is not a “grant” of rights to people, it is the people securing their rights and ordering their lives under common community standards.

Those rights reserved to the people that are not enumerated in the Constitution are indeed secured by the 10th Amendment.  They are states’ rights, or more properly framed, rights of the people.  When the state of Texas outlawed the practice of abortion, and saw that law challenged, there was only one possible, correct, legal, Constitutional outcome.  In fact, the case of Roe v. Wade could have, and should have been decided in fewer than three pages.  The first two and one-half pages of the opinion would have been the caption, procedural posture, and the facts.  The rest would have been legal opinion.  The handful of sentences before the signature of the opinion of the Court should have read like this:

“The United States Constitution is silent on abortion.  Petitioners ask this court to assume the function of a federal legislature, a role to which it is ill suit and to which it is not charged under the Constitution.  Whatever merit Petitioner’s arguments may have to change the law in the state of Texas, those are arguments to be made to the Texas legislature.  The Constitution commands this Court, through the 10th Amendment, to leave matters of local lawmaking to the States where no Federal Constitutional right is implicated. The State of Texas has banned the practice of abortion, a procedure whereby a human life is terminated for no cause or without due process of law.  We find no federal Constitutional reason to disturb that Texas statute created by her people. Accordingly, we uphold the Texas statute outlawing abortion.  The Court makes no decision at this time about the rights, if any, of a sovereign state to approve this procedure.”

Of course, that was not the decision of the Court.  It should have been.  For decades, the Court has been expanding its power and the power of the federal government.  Since Roe v. Wade, the power of the Federal government has continued to grow, and decisions on hotbed issues from gay marriage to mandated healthcare and the like have been determined by Courts rather than legislatures.  The 10th Amendment has been rendered dead.  Surely, Constitutional carnage is not nearly as compelling as the death of 60 million babies, or the loss of States’ rights and federalism to 320 million Americans.  It is, nonetheless, a grave assault on our Republic.

There are brave Americans out marching for life today.  Somehow, that’s not a popular position. I commend them for their stance, as the battle is even bigger than they know.  America is fighting for her children, her soul, her decency, and our 10th Amendment rights.  One-hundred and fifty years from now, if the Republic survives, and if humanity evolves, we will look back on Roe v. Wade incredulously.   We will ask ourselves, how did a country founded in liberty, forged by a fight for equality, and tested by the forces of darkness, ever willingly assent to killing its weakest, most innocent, souls?  When history records who stood with the innocent children, on what side of the ledger will it mark your name?