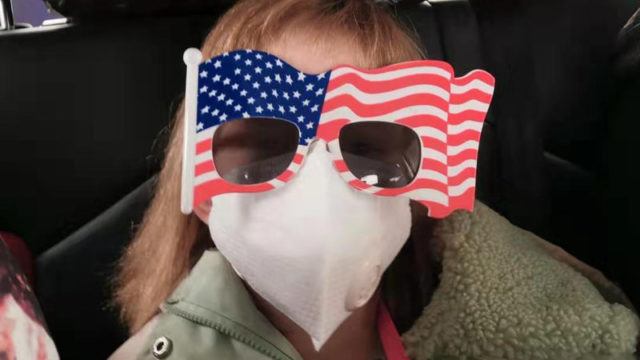 Tonight I received a message from my kids’ school district. There has been a coronavirus outbreak in a nearby community, and all schools are closed for at least the rest of the month.

My family is moving to another city in Colorado later this month, and my kids’ last day at their current schools was going to be next Thursday. Now they will not get to say goodbye to their friends and teachers before we move.

My boys are 8 and 12. When my wife and I called them into our room to give them the news, they both cried.

This is what I told them:

For the first time since World War II, the whole of America is on a war footing.

In World War II, America faced an existential threat in Germany and Japan. Every American knew that if we didn’t stop them oversees, they would eventually try to defeat us here. It was fight or die.

Every American man – white, black, Indian, Christian, Jew, Republican, Democrat – stepped forward to fight. None of those distinctions mattered anymore. They were all Americans fighting the same threat.

Some men who were rejected from service actually committed suicide in shame. Entire industries were nationalized to support the war effort. Women who had never fathomed entering the work force took it completely over while their men were off at war. Supplies and materials were rationed. Neighbor helped neighbor. Everyone was in the same boat rowing in the same direction.

Everyone put aside their differences and came together as Americans. And as a unified country, they won.

Once that strong existential threat was defeated, though, all of those differences reemerged, and natural divisions once again set in. It was human nature. It was inevitable.

There were things that brought us together again for short periods of time – the Cuban Missile Crisis, the 9/11 Attacks – but once those crises ended, so did the unity they had inspired.

We fought other wars – in Korea, Vietnam, Afghanistan, Iraq – but none of those wars were against enemies that were clear and present threats to our existence as a nation. So, we had the luxury of remaining divided on all of those historic matters – race, religion, ideology, even the wars themselves.

Then came the coronavirus. It started in China and infected tens of thousands of people. It spread to Korea and Italy and then throughout Europe. It was inevitable that it would find its way to America’s shores, and it did.

The coronavirus is not an enemy that has an agenda. It does not seek to conquer or kill. It just exists and naturally does those things. But that doesn’t make it any less an existential threat than the Nazis and Imperial Japan were 80 years ago.

And so, once again, for the first time since World War II, all of America faces a common threat – a threat that doesn’t care who is black, white, rich, poor, Jew, gentile, Democrat, or Republican. And so, once again, we no longer have the luxury of caring about those things either.

These have been deeply polarized times. Republicans and Democrats consider each other to be enemies rather than opponents. Racial tensions have increased. The “news” media no longer report news, choosing instead to be propagandists for one particular political agenda. And with this being an election year, these divisions are at their most inflamed.

But while the coronavirus crisis lingers, we don’t have the luxury of indulging these divisions. The threat we now face requires us to set those differences aside and come together once again as Americans.

This epidemic does not require the same sacrifices that World War II did, but it does require major sacrifices.

And the American people have again risen to the occasion.

Large corporations are having their employees work from home.

Colleges are having their students take their classes on line.

Schools like the ones my kids attend are being closed.

All sports programs at every level, professional, college, high school, and church leagues, have been suspended. All of them. Everywhere.

Blockbuster movies scheduled for release during the peak spring season are being delayed until the fall.

Conferences and conventions are being rescheduled, cancelled, or moved on line.

And we are each as individuals also doing whatever is necessary to fight and contain this disease.

We are avoiding crowded areas.

We are washing and sanitizing our hands multiple times per day.

We are staying home with any symptoms of illness.

Well, everyone except the political class.

What I didn’t tell my kids when I talked with them tonight is that the Democrats, their partisan “news” media, and the Republicans in Washington are still shamefully acting not as Americans but as politicians.

Unlike the American people, who are already united in a common cause, the political class is still focused on their petty political agendas and quests for power.

There actually was one brief moment in which the Republicans and Democrats in Washington miraculously managed to come together to do something constructive: Last week they passed a bill to authorize over $8 billion to fight this epidemic. It was a good and hopeful moment for our country.

But it was a false hope. As soon as that was done, they all went right back to sniping at each other and exploiting the crisis for political gain.

Wednesday night, President Trump addressed the nation about the epidemic. He laid out a policy agenda that was thoughtful and well-reasoned. But the speech itself was poorly written and delivered, and it contained inexcusable errors – one of which had to be corrected by the White House a half-hour later to literally prevent a global economic meltdown. At a time that the president needed to reassure a nervous public, he instead pointed out that we are fighting a “foreign” virus. He didn’t want to be blamed for it.

But his fear of being falsely blamed was actually understandable as the Democrats and their partisan “news” media allies have done everything in their power to blame the president for a virus that was in no way, shape, or form his fault. Rather than trying to reassure the public and earn their confidence, they have shamelessly worked to inflame passions in order to undermine and weaken the president politically.

Their efforts have not succeeded in creating hysteria among the public, but they have succeeded in stoking panic in the financial markets: In the past week, the American market has lost literally $2 billion of value for every one person diagnosed with coronavirus in the country.

This placing of political interests ahead of the public welfare in a time of crisis is an abhorrent abdication of responsibility and betrayal of the country that these politicians – and the news media – all pledged to serve.

It is sick. And it needs to stop.

The American people have behaved admirably in the face of the greatest adversity we have seen since World War II. We have already risen to the occasion with unified dignity, determination, and grace.

Sadly, however, we still have the burden of standing up to our country’s political class and forcing them to do what every decent citizen is already doing – to put aside their petty political differences and act as Americans.