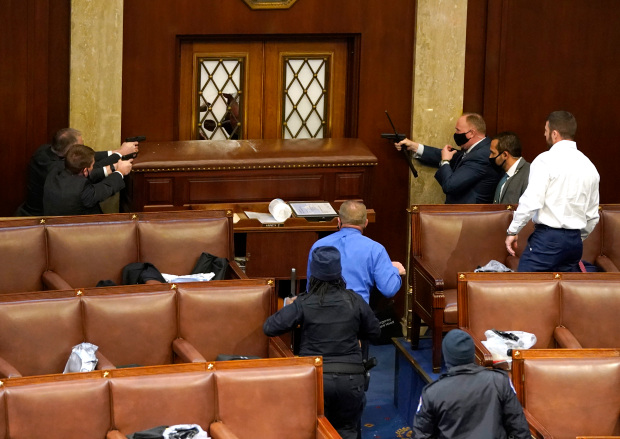 The volatility in the United States is palpable.  The country is, and for many years now has been, a powder keg. What transpired on January 6, 2021, was truly a Capitol offense. We are killing America. We conservatives… have to be – and are – better than this.

America has been in a state of decay for decades, morally, culturally, and politically. Committed Conservative has been reporting on, analyzing, and even predicting much that we now see on TV and the Internet. We are a country that has been dying. Now, in the throes of cultural and political pandemonium, we are on the verge of war.

To be clear, Committed Conservative is not advocating, nor have we ever advocated, a civil war. We have been warning of it based on the realities of our times and identifying those causes and events.

Tragically, the events of January 6th proved us right.

Committed Conservative has always been clear on our position about this kind of conduct: Rioters, looters, arsonists, and political subversives using violence and crime should be arrested. We don’t care what your cause is or from which tribe you’ve come.

The vast majority who attended President Trump’s rally conducted themselves lawfully and properly. But if you were one of the small group of attendees who manhandled police, trespassed onto the Capitol grounds, broke glass/doors/property, or took other lawless actions that we saw on January 6th, then you should be found, arrested, prosecuted, and jailed.

There is NO EXCUSE for what happened.

Committed Conservative has been very consistent on this. When the anti-American left threatened politicians on the right, when they rioted, looted, and destroyed Minneapolis, Portland, Seattle, and other places, we condemned those actions. We called for the arrest and imprisonment of those people as well as the ones who have attacked the police and others in our schools.

This is not who we are, as conservative or as Americans. We are not like ANTIFA, BLM, and other anti-American, Marxist organizations and people. We are better than this, and what that small group of people did on January 6th does not represent who we are or what we believe.

As conservatives, and as Americans, we reject and renounce the insurrection at the Capitol, and we refuse to be defined, or let anyone else define us, by those events.

We also condemn the conduct of President Donald Trump on January 6th. The people who stormed and occupied the Capitol were HIS supporters who had attended HIS rally after two months of HIM winding them up with unsubstantiated claims of a stolen election. Those people then marched to the Capitol from HIS rally, where HE worked them up into an absolute frenzy and then told them to “march on the Capitol.”

Then, our president, who had ginned up the insurrection in the first place, waited over three hours – until after these people had not only rushed the barricades but had actually succeeded in entering the Capitol building and occupying it – before going to a microphone to call them off. And even then, as is typical for Mr. Trump, most of his comments were about how HE was the victim – the very idea that was motivating and fueling the insurrection.

Donald Trump might be a Republican, but his conduct on January 6th was the antithesis of who we are as conservatives and of our core principles and values.

Vice President Pence’s handling of the insurrection, by contrast, was an exemplar of leadership. He focused on the safety of the people in the Capitol building when the attack began. He then coordinated with the military, Congress, and the DC government to get the National Guard deployed to end the insurrection as quickly and peacefully as possible. He then reconvened the Congress to show that those involved in this invasion of our Capitol did not win – and then he spoke as the presiding officer of the reconvened session of Congress and explicitly said just that.

Committed Conservative commends and thanks Vice President Pence for his leadership. He was a model of who we are as conservatives and as Americans.

As a result of Donald Trump’s gross irresponsibility and malfeasance, millions of Americans saw a small band of outlaws seemingly trying to kill America and stage a coup on what they believed was his orders.

But the evidence shows that while some ANTIFA thugs were involved, the overwhelming majority of insurrectionists were Trump supporters from his rally. Indeed, all three of us at Committed Conservative watched the events occur in real time on a live feed provided by a Trump supporter. The conversations and chants that we heard live were those of Trump supporters and members of the Patriot movement. There is no way that hundreds, maybe thousands, of ANTIFA thugs could pose so convincingly as principled Patriot movement activists for hours on end.

Some Trump supporters respond that even if that’s true, it was ANTIFA who led the way, and the Trump supporters followed them. That’s possible, and the truth will eventually be learned. But is the claim of being sheep, so easily shepherded by the opposition into committing violence against their country, really one that should make Trump supporters proud and that should absolve the participants of responsibility?

No, the vast majority of the participants were Trump supporters from his rally. At the core of conservative principles and values is the idea that we are all personally responsible for our own conduct. So, while Committed Conservative shares many of the views and goals of the Patriot movement, we condemn this insurrection and those members of the movement who participated in it.

Like the War on Trump that has been waged relentlessly by the Democrats and their “news” media partners over the past 4+ years, the events of January 6th are now engraved in the rolls of history and are now part of the foundation for the greater fight to come.

Tragically, during the insurrection, a woman was shot and killed by a member of the Capitol Police. The facts and circumstances of the shooting have not yet been revealed, and Committed Conservative will not join the “news” media and others on the left in their pattern and practice of rushing to judgment in such incidents. But we will say that these kinds of unintended tragedies are almost inevitable when people create situations like this.

What cannot be denied is that if the participants of the insurrection had continued to engage in what started as a peaceful and lawful protest, instead of rioting, this never would or could have happened.

And again, Committed Conservative has always been very consistent on this point. As riots took place in our inner cities last summer, leftists insisted that MOST of their protests were peaceful. We responded, “So why didn’t you stop the people committing violence in your ranks and in your name? And why aren’t your leaders speaking out and stopping the violence?“

Indeed, the very same leftist leaders who remained silent – and sometimes even expressed encouragement – about the riots by leftists last summer throughout the country are now the first ones screaming condemnation of the events of January 6th. Spare us your righteous indignation. You have no standing.

By contrast, Republican and conservative leaders across the board wasted no time in speaking out with one unified voice condemning the insurrection of January 6th – even as it was happening. As discussed above, Vice President Pence condemned it from the chair of the Senate. Conservative pundits at Fox News and other right-leaning networks condemned it. Republican congressional leaders, including those sympathetic to President Trump’s election grievance, universally condemned it.

This too is a commendable study in contrast with the supportive way the Democrats and other leftist leaders responded – when they bothered to respond at all – to the riots of last summer committed by people in their own camp.

And that right there is what’s killing America.

You… us… tribalism. If you were there on January 6th and did nothing to stop the insurgence, you are complicit. If you are on the Internet calling out the radicals from one side, but you sat silent while people on your side were burning down America… you are complicit in killing America.

What we have been doing is trumpeting a warning about America’s impending demise and the kinds of things occurring that historically have led to war.

The events of January 6th weren’t shocking if you’ve been paying attention. In fact, as we have repeatedly warned, they were the inevitable result of the relentless War on Trump – and of much of Mr. Trump’s own unnecessarily provocative and petulant conduct.

Jay published an article the day before the election, “The Day After Tomorrow: War,” outlining where things are and where he believed they will go. That article has been accurate, as have been the other articles by Rich and Ken on this subject. Rich was prescient in his article “The Fall of the American Empire: Political Self-Segregation and the Civil War of 2021,” as much of what he posted there a few years ago are moving on a timeline he outlined. And Ken, in his recent article “25 Steps from the Democrats’ Radical Actions to a New Civil War,” likewise laid bare the new American reality.

Committed Conservative does not want a civil war and has never advocated for one. We love our country and all Americans – including, in the great Judeo-Christian tradition, those who disagree with us. But if you have been paying attention to what has been happening in our country over the past several years – as we have – you cannot have been surprised by the events of January 6th. It was always a matter, not of “if,” but “when.”

We will continue to condemn the violence and destruction that we have seen throughout our country. While the leftist “news” media condemn the insurrection of January 6th after they spent months supporting riots conducted by leftists, Committed Conservative will always condemn such actions no matter who engages in them. While the “news” media engage in situational ethics, we will continue to engage in intellectual honesty and consistency.

Committed Conservative remains dedicated to educating people about the divide between the anti-American left and Americans, which is continuing to widen. It is now so wide that we are concerned there is no middle ground – that the two sides no longer have any common ground or common culture.

That is how war starts.

A true and open civil war continues to become more and more inevitable. We are headed into uncharted territory.  Rather than choosing a side and preparing to fight, consider what role you can play to start healing wounds and restoring confidence in our country, our institutions, and our people.

No matter your point of view, you can decide that those who disagree with your views are honorable opponents in the great American tradition. Or you can continue to see them as your enemy. If you choose that path, you personally will be complicit in killing America.