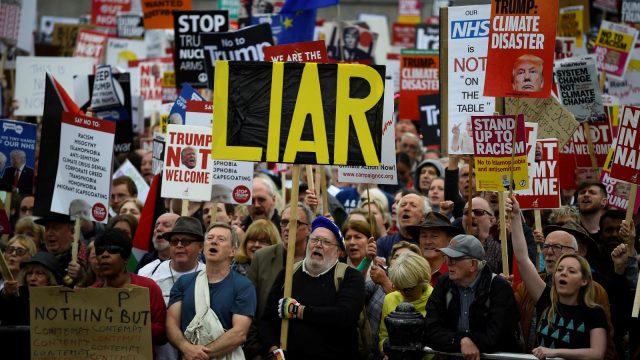 Just like that, the “not my President” and “resistance” radicals who perpetrated the Russian Hoax, denied Trump’s legitimate election and spent four years smearing him and everyone not them, want unity. I’m all for putting “unity” back in the “United” States. Let’s consider how we can do that.

At last count, putting aside any fraud, Joe Biden won this election on razor-thin margins in key battleground states. He did so by miraculous turnout, making him apparently even more popular with democrats that Barack Obama. Congratulations, the party that turned out in droves is now really Biden Democrats. No one saw that coming. In fact, only 49% of Democrats who voted for Biden actually voted for Biden. The Fox News, 100K voter election day interviews showed that most democrats came out to vote against Trump. So, these Trump haters now want unity for their … guy … or party … or just for short term public relations, I suppose.

What a mess and what a joke.

Mr. Biden is in steep decline, and when fully functioning he was less than impressive and repeatedly passed over for the big job. In Biden, the Biden Democrats have embraced senility and mediocrity in the name of defeating President Trump.

Still, I want to be clear. When the recounts and court challenges are over, if Joe Biden wins, and I am certain he will, he will be my President. Obama was my President, and Trump, and Bush, and Clinton, and Bush 1, and Reagan … and so on. Why? Well, I’m an American, not a crybaby. You don’t have to convince me to unify.  You may never convince me to support Biden’s policies, but to root for his success and that of my country, I am all in on the unity train.

The problem the Biden Democrats have … whether they are really just Democrats, Biden supporters, Trump haters, or altleft radicals, is that to have their guy be effective, he must unify the country when nearly 50 million people … or 70% of Republicans … think the election was tainted.  They are convinced the election was foiled either by fraud or that the vote was insecure. By the way, I’m in that group. You cannot have a free, fair, transparent, trustworthy election without in-person voting, voter-id, a chain of custody, and third-party oversight. So, yes, this election was a joke, and the outcome, which this guy might accept, is clearly dubious.

But once you have me … you only have one out of 50 million willing to accept the result of an imperfect election where fraud was widespread, documented, but not enough to overturn the election. Heck, the dead voted in Georgia.  Now you need the other 49,999,999. How do you get that unity?

I have no idea how many of the 50 million people who view his election as illegitimate will sign on for unity if he does these things, but it would be a lot. Of course, he would lose that wing of his party that wants to destroy America, remake it as a socialist enclave, and ensure that the fight in the streets goes on.

If Biden does all that, he will split his party from the radicals, but unite his country around common values. Then, we can fight over tax, immigration, and healthcare policy. We can discuss the role of American interventionism, environmental policy, and how to modernize our infrastructure.

Unity with “Biden Democrats” can never come with those parts of his coalition who view republicans and conservatives as racists, rubes, killers, white supremacists, and misogynists. Unity will never happen with those who lionize murderers and criminals while tearing down our police.  We are never going to unify with those who hate us, hate our values, question our moral code, and seek to fundamentally remake America into a socialist dystopian society of rationed rights and speech codes.

The last election makes clear that Trump’s policies of making America great, putting our country first, untangling us from foreign fights, remaking globalist deals, and empowering people are actually quite successful and popular, even if the President himself wasn’t. There was no blue wave. Hell, the GOP will hold the Senate and nearly stole the house after all these “Biden Democrats” came our or were manufactured.

This country wants to embrace freedom, liberty, prosperity … and optimism. That’s not what the altleft, TDS suffering, BLM-excusing, Antifa-empowering wing of the Democrat party wants. So, if these so-called Biden Democrats want unity, they need to embrace Biden, and Biden needs to throw the crybabies and soap scum out with the bath water he uses to clean the mess in his own party.

If not … we continue precisely on a path for the opposite of unity … which is now, and in each minute increasingly likely, a civil war … as I predicted in 2018. Let’s see if Biden and his democrats really want unity … assuming, they really won.