Right now, you are scratching your head and asking who this is I am talking about? A cousin of Donald Trump, maybe? No. As you will see, it is possible that in 2024 election, we could name the 47th President of the United States: Grover Trump.

Okay, who is Grover Trump? Well, the name is a play on words. I could have easily said “Donald Cleveland.” At this point, you are asking me if I am off my meds. Just sit tight a second, as I explain. If you didn’t know some of these things, it might be a little eye opening.

Before I dig in, I need to say one thing… for something like what I am about to tell you to happen, Donald Trump needs to pipe down. That latest press conference was a hot mess and he is starting to turn even Republicans off. And for what I am about to tell you to happen, he will need to be seen as a guy above the fray. Above the so-called elections fraud and all of the rest of the mess that is swirling about. So President Trump, if you want a shot at a second term, you need to do something you are not real good at and that is just be quiet.

Wait, did I just say “second term?” Why yes I did. And if President Trump doesn’t blow it right now, he could end up getting one. I know, your next question is “well, how? I mean if Joe Biden is going to be the 46th President of the U.S., how does Trump become the 47th?”

Very simply. And guess what? It has been done before! Let me give you a little history lesson before telling you what President Trump should do in order for something like this to happen.

Have you ever heard of President Grover Cleveland? He was the 22nd and the 24th President of the United States. Yes, I said 22nd AND 24th. You see, President Cleveland was first elected in 1884 and served his first term from 1885 to 1889. Even though he won the popular vote in 1888, he lost in the Electoral College to President Benjamin Harrison. I have put the Electoral College final dispositions for 1884 and 1888 below (President Cleveland was a Democrat, so the states he won are in blue).

Now you have to understand that President Cleveland was elected, both times, in an era of Republican dominance (1861-1933). The only other Democrat president to be elected in that time was President Woodrow Wilson.

As in 1884, the election focused on the swing states (what we call today “battleground states“). Those states included New York, New Jersey. Connecticut, and Indiana. In 1884, President Cleveland secured all four of those states, while in 1888 he only won two of them. One of the two was his home state of New York, which he lost by 14,373 votes. President Cleveland even won the popular vote, beating President Harrison 48.6 to 47.8 percent, but since we select our presidents via the Electoral College, President Harrison won easily (233 to 168).

For those of you seeking further parallels between President Cleveland and President Trump, what you also might not know is that the Republicans won Indiana in 1888 largely due to the use of a fraudulent voting practice known as Blocks of Five. You can click on the link to find out what that is.

There was one telling event that foretold what would happen next. As President Cleveland, and his wife Frances, were leaving the White House, the First Lady told a staffer: “Now, Jerry, I want you to take good care of all the furniture and ornaments in the house, for I want to find everything just as it is now, when we come back again.” When asked when she would return, she responded, “We are coming back four years from today.”

We have had one term presidents before. Recent examples are presidents Jimmy Carter and George H.W. Bush. Both accepted their defeat, and returned to private life. In the case of President Cleveland, though, it was a different story. I will not bore you with the details, but to suffice it to say that there were some economic policies being pushed by the Harrison Administration, for which President Cleveland found to be abhorrent. In 1891, President Cleveland wrote the Silver Letter, outlining his opposition to what was being proposed. It was that letter that pushed President Cleveland back to the national stage.

Because President Cleveland had left the scene gracefully, and due to him opposing the economic policies of President Harrison, he was selected by the Democratic Party as their nominee in 1892. This election ended up being, according to Cleveland biographer Allan Nevis, “the cleanest, quietest, and most creditable in the memory of the post-war generation.” This was partly due to the fact that President Harrison was not campaigning much, as his wife was dying from tuberculosis. Mrs. Harrison died two weeks before the election, for which all campaigning stopped on all sides, effectively ending the election campaigns. President Cleveland won his second term by again not only receiving the popular vote, but by winning the Electoral College (Cleveland 277, Harrison 145, James Weaver 22). Weaver was the Populist Party nominee, which was a party that had split off from the Republican Party.

Alright, history lesson is over. Now how to apply this to President Trump and the 2024 election?

If President Trump wanted to, with his huge gains in supporters, he could run again in the next election. I’m not going to go through the current election, or the mess going on, but it appears that President Trump gained support significantly with minorities and others. He won Florida handedly due to this.

President Trump, as soon as the results are decided and any court battles are finished, should first just finish his job through January. He should not stop doing what he has been doing. Once he returns to private life in January, he should immediately begin running for 2024. And I believe, he should announce he is running then. Not only would that make the left angry (which is his forte), but it would solidify the “Trumpers,” his solid supporters. If he can do that, then those thinking of running in 2024 on the GOP ticket, would immediately have their knees cut out from under them. Why? Because as we have seen, Trump supporters hold hard and fast to him, no matter what. Without them, others who might run would not have the numbers needed to succeed.

All of this is predicated on President Trump stopping what he is doing now. He will have to rise above what is happening. I’m not saying he shouldn’t challenge the election where he can. He should. But he should stay above it, and let his people do the fighting.

In private life, and beginning his campaign in January 2021, he could then set up his campaign headquarters and begin the daily and weekly effort of countering everything the Biden Administration will be doing. If the GOP holds onto the Senate (and that is a big IF right now), then they could use this support to help them stop most/all of the Biden agenda over the next two years, and help fend off a Democrat run on the Senate in the 2022 elections. His campaign could help fund and push top candidates to begin filling in needed positions at the state and Federal levels.

He could also begin helping solve a major problem in the United States right now. And that is the media and social media. He could lend his support and help build financial stakes in some of the new and upcoming media outlets and social media platforms like Parler and Rumble. Over time, as people see that these platforms and new media outlets cover the news and present all sides, many folks will move away from the Main Stream Media (MSM) and Facebook/Twitter. This will help immensely with countering what happened this election, with the misinformation brought by the MSM and others, which helped lead to Biden’s apparent win.

He could put out position papers and do press conferences/Rumble feeds which outlined why certain things Biden is doing are wrong, and put forward his proposals. He would have the Biden Administration constantly having to answer questions about what “Trump said.” He would be a thorn in their side, just as the left has throughout Trump’s first four years (with the impeachment, Russia collusion hoax, etc.). He could treat them as they treated him.

Lastly, his pick for vice president is key. First, I want to say that Vice President Mike Pence is a good man and has been a great VP. And would be a great one again. But we are talking politics here, so we must consider a few things. Since we will have the leftist woman vice president, Kamala Harris, it would be smart for him to have a running mate EARLY, and SHE should be out front and vocal also over the next four years. She should have a consistent record, an executive would be even better. She should be a solid conservative, and able to speak well and stand up to the nonsense that will come her way. My pick for this would be Governor Kristi Noem of South Dakota.

In the upcoming days, I will begin laying out how Americans can fight the upcoming civil war with the antiAmerican left. I talked about this civil war in my article, The Day After Tomorrow: War. You can read that and find out where we are at. But what is needed now is a game plan, or what we call in the military, an “Operations Order” (OPORD). I will have one soon!

The future is bright and can be even with President Trump fading into the background. But he need not do that, if he doesn’t want to. He could be the game changer, doing what he has done best and that is to stir the pot. He must do as I said above, though. If he does, he could be the second president in our history to return from defeat. 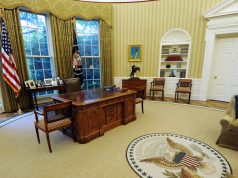