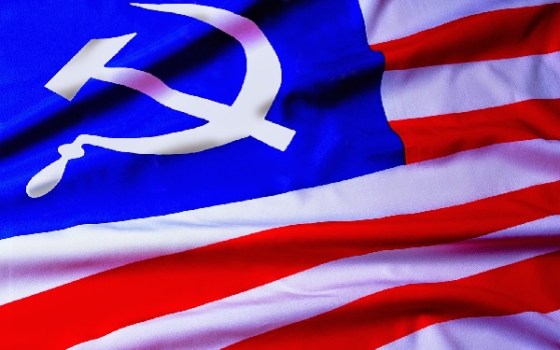 The Trump campaign and Republicans are utterly failing to expose the existential threat that today’s Democrats pose to our country as founded.

The Democrats’ plans to abolish the filibuster and stack the Supreme Court are their plan to abolish the Constitution and impose a socialist dictatorship on the country.

Abolishing the filibuster will enable the Democrats to impose unchecked one-party rule on the country. Stacking the unelected and unaccountable Supreme Court with leftist ideologues with lifetime terms will then enable them to impose those unconstitutional laws on the country with impunity.

This is how they intend to nullify the Constitution and effectively end our existence as a constitutional republic.

This is what makes the modern Marxist Democrats and their “news” media cohorts the gravest existential threat that our country has ever faced.

This is what Donald Trump and the Republicans need to be warning the country about in this election – but are utterly failing to do.

Unlike almost every other country in history, America has never faced a violent revolution designed to overthrow our government because our Founding Fathers created a brilliant system that enables us to conduct a peaceful revolution at the ballot box on a regular basis.

But if these Democrats win and actually do what they’re planning, the peaceful revolutions at the ballot box that have always been the hallmark of our constitutional democracy will no longer be possible because, no matter the outcome of any election, the country will actually be ruled by the stacked and all-powerful Supreme Court regardless of what our representatives do.

If the American people can’t control our own destinies through peaceful elections, we will have no alternative but to engage in violent revolution like oppressed people around the world have done throughout history.

Americans at our core are rugged individualists who will not passively sit back, allow our Constitution to be shredded, and allow our country to be transformed into a socialist dictatorship. That’s not who we are, ever have been, or ever will be as a people.

As Ronald Reagan famously said, ““Freedom is never more than one generation away from extinction. We didn’t pass it to our children in the bloodstream. It must be fought for, protected, and handed on for them to do the same, or one day we will spend our sunset years telling our children and our children’s children what it was once like in the United States where men were free.”

Now let me be very clear: This is not about whether we will accept the outcome of a proper and legal election. Unlike the Democrats and their “news” media over the past 4 years, we will do so, and we will accept being lawfully governed by the winners.

But if those who are elected govern in an illegal and unconstitutional manner designed to usurp our freedom – as they are openly planning to do – the American people will not accept that.

If we can no longer control our own destinies through the constitutional process and with all of the Constitution’s protections and limitations on the powers of the government, we will fight by any means necessary to restore our ability to do so.

Thus the direct and foreseeable consequence of the illegal and unconstitutional plans of the Marxist Democrats to shred our constitution and impose a socialist dictatorship on this country will be a new civil war.

The most important Democrat, of course, would be Joe Biden, who throughout his career in the Senate was a reasonable and centrist Democrat who genuinely loved his country. Tragically, he sold his soul in this election to win his newly radicalized party’s nomination. If he wins, the survival of our nation as a constitutional republic will depend on which Joe Biden shows up in the White House.

A new civil war is a real possibility because of the radical plans of the Marxists who now control the Democrat Party. In the immortal words of Thomas Jefferson, “The tree of liberty must be refreshed from time to time with the blood of patriots and tyrants. It is it’s natural manure.”

Nevertheless, no one wants a civil war, and it can be avoided only by defeating the Marxist Democrats or by praying that Joe Biden is, at his core, still an American who values our Constitution and has the courage and fortitude to defend it from his own party.