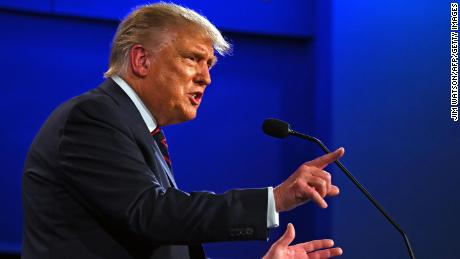 Oh my stars, a president isn’t supposed to act like that!

Especially not a Republican president!

Republicans are supposed to behave in a dignified manner as the “news” media royalty lie about them and debate moderators give them insulting questions and side with their opponents!

Just look at the dignitaries who came before, our fathers’ Republicans: Mitt Romney, John McCain, Bob Dole, George Bush. They all knew how they were supposed to behave: Treat the lies as sincere mistakes, the insulting questions as serious, the moderators as neutral. Always, always play by the establishment’s rules with the utmost dignity.

And, of course, dutifully and gracefully lose the elections.

Donald Trump never got the memo.

Last night, he was bombastic, rudely interrupting his opponent and ignoring the exasperated pleas of the moderator to follow the rules.

In other words, he was Donald Trump.

And that’s why we elected him.

For decades, the “news” media and the establishment have rigged the system against Republicans while Republican candidates dutifully played along with the most austere dignity.

Donald Trump stepped into that political world in 2015 and refused to play by those rules.

He spoke his mind bluntly.

He ridiculed his opponents.

He attacked the “news” media and called them out for the bias we’ve all known for decades they have but that no previous Republican was willing to defy.

And Republican voters who were sick and tired of weak-spined Republican candidates playing by the rules of an establishment that was working to defeat them ate it up.

One by one, the dozen other Republican candidates from the establishment fell to the petulant newcomer until that newcomer emerged as the Republican nominee.

And then, with the entire establishment of both parties working against him, with the round-the-clock support and cooperation of the “news” media, that same newcomer defeated an opponent who had been anointed the winner by that same establishment from the start.

What the establishment never understood – never had the humility and self-awareness to be able to understand – was that Trump won because he was a petulant upstart who refused to play by their elitist rules.

He refused to act oh-so-dignified in the face of incessant personal attacks.

And, most outrageous of all, he refused to lose.

We knew who we were electing. His attitude and behavior were known since before he entered the race.

He was “The Donald.”

He was the guy who was respectfully called “Mr. Trump” by celebrities who competed to get on to a game show where he was the only person making the rules and calling the shots in the game.

He was the world’s first celebrity businessman.

We the American people knowingly and intentionally elected that guy.

We did it because we were sick and tired of Republicans who played by the anti-Republican establishment’s rules and allowed that establishment to become more and more corrupt and removed from the realities of our lives.

And we got the guy we knowingly and intentionally elected.

For the past four years, Donald Trump has continued to defy conventions – as we knew he would when we elected him.

No matter what the establishment and their “news” media allies threw at him, he fought back just as hard while at the same time remaining undistracted from his work as president.

And, unforgivably, despite having been the victim of the most ruthless campaign of attacks ever waged against an American president, he overcame every single attack and is still standing.

In fact, those involved in concocting those attacks by fabricating fake scandals are now themselves under criminal investigation.

When a president is under assault for scandals contrived by his political enemies, he’s supposed to take those attacks seriously, drop everything else, and focus on addressing those attacks in a dignified and “presidential” manner.

But again, Trump never got the memo.

To the maddening frustration of the establishment and their “news” media allies, Trump refused to be distracted and worked harder than any other president in modern history to <gasp> keep his campaign promises.

And because he proved to be so utterly indistractable and tenacious, the country enjoyed the strongest economy in our history, and the world enjoyed the most stability it has seen in decades.

He even overcame the most intractable problem faces by every president in the past century by achieving breakthroughs that are expected to lead to peace in the Middle East.

All of this happened because the American people knowingly and intentionally elected the bombastic, undignified, un-“presidential” guy who refused to play by the establishment’s rules.

So, Trump appeared for the first debate of this campaign season, and, to the surprise of no one who has been paying attention to the past 5 years, he refused to play by the rules. He interrupted constantly and ignored the instructions of the moderator.

In other words, he acted as the guy that we knew he was and always has been when we elected him.

The “news” media and respected academics all tsk-tsked afterward at what an unseemly spectacle it all was. Trump still hadn’t learned that his job as the Republican presidential nominee was to follow the rules, treat the insulting questions with respect, and lose.

But as we the people made clear four years ago, those ivory-tower elitists are not the ones who decide who gets to be president. We are. And we chose that guy. The guy who has always refused to play by their rules – and won.

So, you ivory-tower establishment elitists, keep mourning for the days of our fathers’ Republicans, the ones who willingly played by your rules and dutifully lost.

That guy that you hold in such contempt for defying your rules represents the contempt we all have for you, and as long as you continue to show us that contempt, we’ll continue to support the guy who’s on our side.