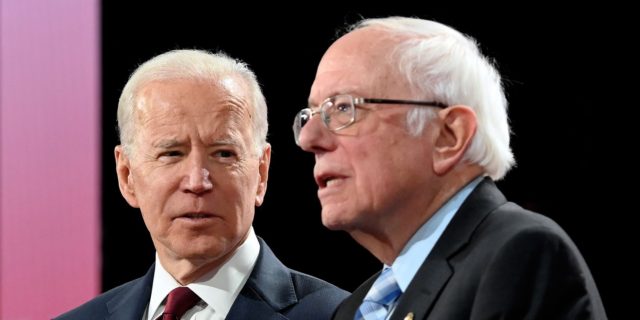 Barring any surprises, today’s primaries should lock up the Democrat nomination for Joe Biden. Giving credit where it’s due, the Democrat establishment, if not its activist base, realized that allowing Bernie Sanders to define the Democrats as the party of socialism would have been suicidal. They not only would have guaranteed Donald Trump’s reelection; they would have been discredited for a generation.

Biden is far from an ideal alternative, but he was the one establishment Democrat around whom the others could form a consensus to defeat Sanders, and they did so in the nick of time.

In doing so, they likely forfeited the election but saved their party.

Joe Biden at one time was a reasonable and intellectually honest Democrat who took moderate, and sometimes even conservative, policy positions and even supported strict constructionist judges. As Chairman of the Senate Judiciary Committee in the early ’90s, Biden courageously bucked his own party by treating Clarence Thomas fairly when he was shamelessly smeared by Biden’s Democrat colleagues as a desperate tactic to try to prevent him from being confirmed to the Supreme Court. Biden was also the author of a bill that strengthened our criminal justice system and got tougher on criminals.

Even in those days, though, and throughout his tenure as Vice President, Biden often demonstrated poor judgment, particularly in the realm of foreign policy. President Obama’s own Defense Secretary wrote in a book, “I think he has been wrong on nearly every major foreign policy and national security issue over the past four decades.”

In 1988, Biden had to end his presidential candidacy because he was caught plagiarizing a speech from a British politician.

And we’re learning more every day about how Biden allowed his sons and siblings to use his name and position for dramatic financial gain.

Joe Biden has suffered terrible tragedies over the course of his life. In 1972, he lost his wife and daughter in a horrific car crash. Biden had just won his first election to the Senate, and in his grief, he decided that he would not take office. His Senate colleagues, Ted Kennedy in particular, convinced him to change his mind.

But that kind of tragedy takes a toll. In the late ’90s, when Biden was still in the Senate, I had a close friend in law school who was a staffer for another senior Democrat senator. I asked him once what he thought of Joe Biden. He answered that he thought that when Biden lost his family in that tragic car accident, he also lost a piece of his sanity. This was the candid assessment from a partisan (although intellectually honest) Democrat friend who worked for one of Biden’s closest allies.

In this year’s Democrat primary, Biden tried to sweep his previous moderate record under the rug as he moved sharply to the left to gain acceptance from his party’s far-left base. They never bought it, and all he accomplished was proving how unprincipled and opportunistic he’s become. So now the Democrats have a nominee who has renounced his history of moderation that would have appealed to his historic base of Rust Belt voters in favor of a leftist ideology that is offensive to their working-class values.

But Biden’s problems run deeper than just his policy hypocrisy. He has a history of making eye-opening statements, such as that then-presidential candidate Obama was “the first mainstream African-American who is articulate and bright and clean and a nice-looking guy” and that in his home state of Delaware, “You cannot go to a 7-11 or a Dunkin’ Donuts unless you have a slight Indian accent. I’m not joking.”

And he didn’t earn the nickname “Creepy Joe” for nothing.

As he has aged, his long history of making embarrassing gaffes has grown to becoming daily occurrences:

He has asked a man in a wheelchair to stand and be recognized.

He has frequently forgotten where he was or what date it was, including on the day before this year’s do-or-die Super Tuesday primaries.

More recently, he forgot the iconic words that he was trying to quote from our Declaration of Independence: “We hold these truths to be self-evident – all men and women created by – you know, you know, the thing.”

These ongoing and ceaseless gaffes have raised legitimate questions about whether he currently has the mental faculties to be entrusted with this highest office in our nation.

Nevertheless, to the credit of the Democrat establishment, they realized that even this deeply flawed candidate was preferable to a self-avowed socialist revolutionary. Although a lot will happen between now and November, it seems unlikely that Joe Biden can defeat President Trump, especially if the economy remains strong. Even unaffiliated voters who don’t like Trump are likely to take pause at Biden’s current condition and prefer the devil they know.

But from the Democrats’ perspective, at least Joe Biden won’t destroy his party for a generation in the course of losing the election.