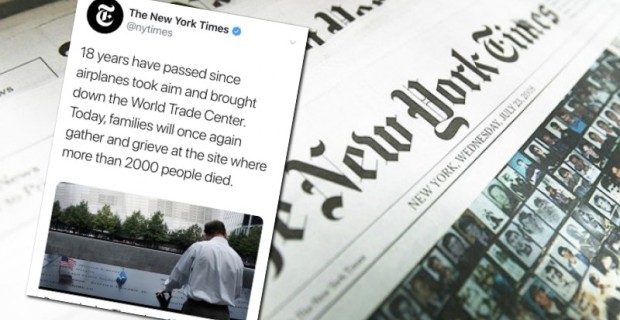 The ground-breaking editorial came amidst the Times‘ in-depth coverage of the events of September 11, 2001, in which the revered Newspaper of Record reminded the world that 18 years ago, “airplanes took aim and brought down the World Trade Center.”

The Times editorial recounted the tragedy that resulted when four airplanes suddenly took control of themselves and aimed themselves at selected targets throughout the United States.

The airplanes succeeded in striking both towers of the World Trade Center in New York City and the Pentagon in Arlington, Virginia. Heroic passengers on United Airlines flight 93 were successful in thwarting another airplane’s effort to strike a target in Washington, DC by forcing the plane to crash in Pennsylvania.

The American people remember to this day the expressions of horror, sympathy, and support that were sent by all corners of the world, from our closest allies in Europe and the Americas to our Islamist brethren in al Qaeda and the Taliban.

However, the esteemed Gray Lady today declared that those thoughts and prayers for our nation were not sufficient to address the real issue: “How many more innocents must die because Congress is beholden to the airplane lobby and refuses to eliminate these weapons of destruction from our midst?” demanded the Times editorial board.

Democratic candidates for president across the board immediately praised the Times for its courageous advocacy and declared their solidarity with the anti-airplane campaign.

“When I’m president, airplanes will turn themselves in because that will be the law,” added former Rep. Beto O’Rourke.”

But perhaps the most poignant comments came from former Vice President Joe Biden: “On September 11, 2001, I was on United Flight 93 making an official trip back to DC as Vice President. My word as a Biden. I saw firsthand the bravery of those who refused to allow the plane to reach its target in Washington. Even as these heroic passengers were bringing the plane down, I tried to present an award for heroism to Todd Beamer, but he refused it, saying he didn’t deserve it. I’ll never forget his humility and courage.”

When asked how he could be alive today if he had been on Flight 93 on 9/11, Mr. Biden responded, “Well, the details don’t matter. What matters is that I will fight to ban airplanes to make sure this kind of tragedy never happens again.”