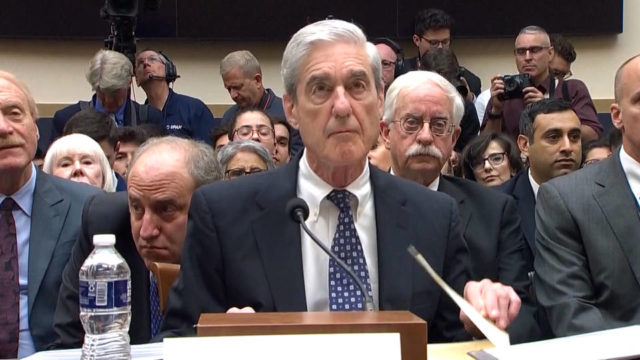 The conventional wisdom is that yesterday’s Mueller hearings didn’t reveal anything new and didn’t move the needle regarding his investigation in any direction.

While Mueller’s testimony added nothing new to the case that Democrats have been trying to make for impeachment of President Trump, his performance suggested answers to many questions about the conduct of his investigation that people have been asking for months, and those answers all boil down to one very sensitive but serious suspicion that is raised from that performance: Bob Mueller is going senile and was never truly in control of the investigation.

I mean this very seriously.

Before I get into the bases for this suspicion, I want to emphasize that I am not in any way intending it to be some kind of insult or attack on Mr. Mueller. Mental illness, including a loss of mental faculties with age, is a serious and sensitive matter that I would never belittle. I am making the suggestion that Mueller may be experiencing the onset of senility in a very serious manner and based on many cases of circumstantial evidence that are discussed in this article.

So, let’s explore why I have this suspicion about Bob Mueller.

At yesterday’s hearings, Mueller did nothing but give cryptic answers that were mostly references to his report. He often appeared to be unfamiliar with the contents of that report, and even frequently seemed to have difficulty understanding the questions he was asked.

This is not the conduct that was expected from this former Marine, career prosecutor, and FBI Director, a man who was appointed to be the special counsel based specifically on his lifelong history as a man of unquestionable integrity, toughness, thoroughness and grit.

All of which leads me to ask: What if Mueller conducted himself the way he did because he is no longer able to conduct himself in any other way? What if he declined to give any substantive answers about his investigation and conclusions because he didn’t know the answers?

In short, what if Robert Mueller is going senile? And what if that was the case from the beginning of the investigation?

That would explain a lot of unanswered questions about this investigation.

It was always perplexing why Mueller, a lifelong Republican, hired a staff of prosecutors consisting entirely of partisan Democrats. These hires finally make sense if Weissman, a partisan Democrat who even attended Hillary Clinton’s “victory” party on election night 2016, was the one truly running the show and hiring the staff for the investigation.

Throughout the investigation, Mueller earned praise from many quarters for refusing ever to make any public statement about the investigation. This very well could have been a matter of trying to minimize the public spectacle. But the New York Times today reported that Mueller’s personal involvement in the day-to-day investigation was limited from the beginning and further decreased over the course of the investigation.

All of which raises the question: Was Mueller’s silence during the investigation actually an effort to hide from the public his lack of involvement in, control over, and understanding of that investigation?

The possibility that Mueller was not, and was incapable of being, in control of the investigation would also explain why, once the allegations of Russia collusion by Trump were found to have no basis early in the investigation, Mueller never investigated the origin of those false allegations but instead proceeded for many additional months to try to craft a process crime case of obstruction of justice against Mr. Trump.

We already know that the origin of the false collusion allegations was a “dossier” compiled by former British agent Christopher Steele that even Steele himself has since admitted under oath was completely made up. And we also know that the creation of that fake “dossier” was funded with money funneled through a political consulting agency called Fusion GPS to Steele by Hillary Clinton’s campaign.

If this information is widely available to the public, then Mueller and his team certainly knew it as well. So it has been a mystery as to why a Republican special counsel with a reputation for integrity and thoroughness never investigated it. The answer to this question becomes more clear if, in fact, Mueller was not running the investigation, but Hillary supporter Weissman was.

By the way, when asked about this issue yesterday, Mueller stated that he didn’t know who or what Fusion GPS is.

This decision makes no sense if the report was prepared by a lifelong prosecutor with a history of unimpeachable integrity and commitment to the rule of law. But it makes perfect sense if it was prepared by a partisan political opponent of Mr. Trump.

After the report was released, the Democrats trumpeted the story that the only reason that Trump was not indicted by Mueller was that longstanding Justice Department policy, which applied to the special counsel, is that a sitting president cannot be criminally indicted. Attorney General William Barr quickly spoke with Mueller, who assured him that that DoJ policy had nothing whatsoever to do with the decision not to indict and that that decision was made based on a lack of sufficient evidence. AG Barr then released a public statement, approved by Mueller, so stating.

A couple of weeks later, Mueller held a “press conference” about the report consisting of his reading from a script and taking no questions. In that script, he stated the opposite of what he previously told AG Barr, i.e. that the decision not to indict was based on the DoJ policy. (Why did he allow no questions? Was it because he was incapable of answering them? Yesterday’s performance would so indicate.)

Shortly after that “press conference,” Mueller and AG Barr released a joint written statement reiterating Mueller’s original statement that the decision not to indict was not based on the DoJ policy but rather on a lack of sufficient evidence (which also raises the question of who wrote the script that Mueller read).

Mueller also testified that he was unfamiliar with the content of the joint statement that he had released with AG Barr after his “press conference.”

If Mueller is indeed going senile and was never in control of the investigation or report, it would also explain why, at his “press conference,” Mueller begged Congress not to make him testify, and why, when they did so anyway, he got AG Barr to formally and publicly restrict what he could say at the hearings to the literal contents of the report.

Throughout the hearing, Mueller expressed that he was unfamiliar with the contents of his report. He constantly asked questioners to cite the specific pages to which they were referring and would answer their questions only by finding and reviewing those page and then confirming only that what the questioner had said was indeed printed on those pages.

In other words, the vast majority of Mueller’s testimony, merely confirming that certain words existed on certain pages, could have been done with equal credibility and accuracy by any child who knows how to read. This was emphatically not the testimony that we would expect from a career prosecutor and former Director of the FBI.

But if Weissman was the one who was actually in control of the drafting of the report and Mueller was mostly uninvolved, that would explain why Mueller has never seemed to know or understand what that report, issued in his name, actually says.

And if Mueller is indeed going senile, that would explain why this career prosecutor doesn’t even seem to understand the most fundamental legal issues pertaining to his own report.

As I said above, issues of mental deterioration are serious and sensitive, and if my suspicions about Mueller are correct, he has my sincere sympathy and prayers.

That said, the American people have a right to know who was truly in control of one of the most politically charged investigations in American history. If that investigation was not actually being run by the person we were told was running it, that’s a major scandal. And I submit that there is now sufficient circumstantial evidence for this question itself to be investigated.