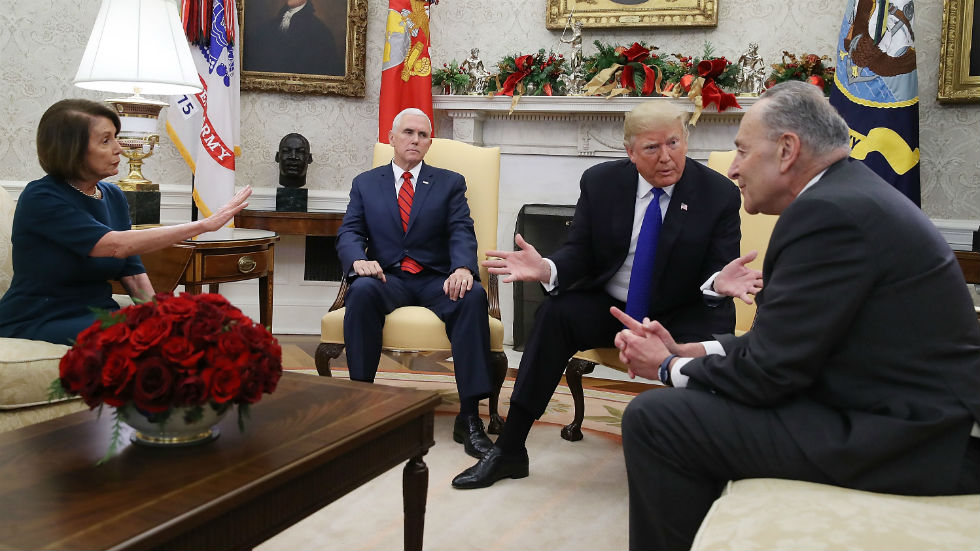 I watched with great interest the political event that occurred at the White House last night. And while media types and pundits argue over who “won” the engagement between President Donald Trump, Senate Minority Leader Charles Schumer, and incoming Speaker of the House Nancy Pelosi, I see something far more consequential happening… the opening shots of the next American civil war.

While I will not go into the blow-by-blow from the epic spat that happened in front of the media in the White House (you can watch it below), I want to cull out a few very important points from that engagement, and to illustrate how, when we look back on this event, we will see that the civil war that we have been warning about has actually begun.

First, I want to say that both sides believe the other was embarrassed and “destroyed” in the engagement. In some ways, both are correct. I can break down how both President Trump, as well as Schumer and Pelosi, gained ground with their supporters, but further alienated themselves from those who cannot be considered in their camps.

I believe Trump did one key thing in this exchange that will set the tone going forward, and can be considered the key opening salvo in the next American civil war. When Trump stated that he was drawing the line with $5 billion for the border wall, he forced the Democrats to understand that the upcoming battles will be fought on Trump’s turf, on ground of his choosing. In this way, the Democrats are already on the defensive.

The second part of the opening salvo was when Trump told Schumer that he would take on the “mantle” of shutting down the government. Trump stated that Schumer shut it down last time, but wouldn’t take responsibility for it. Trump said this time, he won’t point fingers at the Democrats, and instead he will accept responsibility…in the name of national security. In a very real way, this took away any sting from a Democrat initial counter-attack, where the Democrats “blame” Trump for the shutdown. In this case, Trump is taking responsibility for the whole thing, even before it happens.

This set up what I saw in the faces of Pelosi and Schumer. You could see in their eyes confusion, and in many ways, shock…at what Trump was doing. This was evident when Pelosi responded that these “negotiations” shouldn’t be happening in front of the media. What she didn’t understand is that Trump wanted it out in the open, where neither he, nor Schumer and Pelosi, could run for cover and tap dance away from what they said.

In military terms, this is what we call “fixing” your enemy. In the military , a “fix” is a “tactical task in which actions are taken to prevent the enemy from moving any part of his forces from a specific location and/or for a specific period of time by holding or surrounding them to prevent their withdrawal for use elsewhere.” What Trump did, whether he meant to or not, was to fix the Democrats on grounds of his choosing and force them to fight based on the terms he has dictated.

Now, what exactly did Trump use to fix the Democrats in place. Well, simply put… $5 billion. Trump is asking for $5 billion in the Department of Homeland Security (DHS) budget in order to fund building a wall on our southern border. His intent is to slow and/or stop the level of illegal immigration into the United States.

Now, $5 billion is a drop in the ocean when it comes to funds spent in Washington. In many cases, $5 billion is an accounting error. Yet, the Democrats are raising hell over the spending of this $5 billion. They state it won’t work, that it is a waste of money.

For a moment, let’s say the Democrats are correct and it won’t work and is a waste of money. When does ANYONE in Washington go to the mat over such a small sum? I mean, I can sit here and list almost countless programs and spending in Washington that don’t work and are wasteful.

Trump promised a wall in his campaign for president. He promised to do something about illegal immigration. So it is not hard to understand the motivation of Trump in putting this $5 billion expenditure out front, and risking government shutdown and even a backlash for doing so. If nothing else, the one thing we know about Trump is that he is hellbent to keep his promises.

The motivations of the Democrats are less understood. Why fight over this $5 billion expenditure? It cannot be because it won’t work or is wasteful. As I said above, this is a small line item in the budget. Something else is motivating the Democrats to stop the building of this wall, and to locking down our border in general.

I believe that the REAL reason the Democrats are playing “chicken” with Trump is that one of the key goals of the Democrats for the last few decades is to remake the political landscape in the United States. And since most Americans understand the core American principles, and that the left do not share in those principles, the easier route for the left is to “import” peoples that do not understand nor hold dear those principles. They have been looking to expand their voter base through immigration.

With the election of Trump, their plan has been exposed and with Trump’s focus on shutting down the border, their plan is in serious jeopardy of failing. This is why the $5 billion expenditure is important to them. It is not waste or the wall not working that is motivating their opposition… they are fighting for their political lives in order to create a voting block that will help expand and solidify their power.

Their plan is a solid one. It will work, if unchecked. The problem is, President Trump has moved his queen and is one move away from checkmate. And the Democrats know it.

So this game of chicken will likely continue until someone blinks.

What I do know is that this issue and how the White House and Congress are addressing it, will further expand the civil war between us. The divide has grown too wide. The middle ground all but doesn’t exist.

I wrote about this last year (Civil War is Here: The American Course of Action). And not only was I correct, but last night, the opening shots were fired by President Trump. There is no turning back now.

President Trump has now fixed the Democrats into this fight on his terms. Of course, they will not lay down and capitulate, as they understand that the stakes have never been higher for them… even though it is a measly $5 billion.

In an upcoming article, I will update President Ronald Reagan’s “Time for Choosing” speech to coincide with the events of today. His speech is remarkable, and its solutions are the same.

Civil war has begun in the United States folks, whether you want to believe it or not. I’m not saying it will denigrate to violence, and in fact, I pray that does not happen. But the gloves are off now. What Trump did at the White House last night was put the battle right out in front of everyone. And leave all of us with the choice of choosing what side you are on.

The Fall of the American Empire: Political Self-Segregation and the Civil...