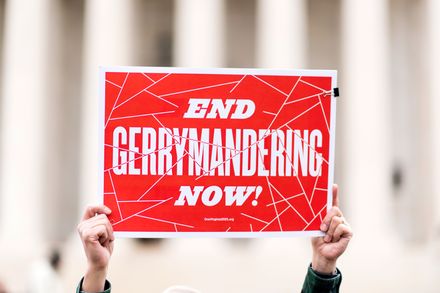 If one listens to left-wing talking points, one might wrongly conclude that the GOP has gerrymandered the Congress so unfairly that Democrats can’t get elected. That’s nonsense. There is no gerrymandering in Senate seats or Governorships, and yet the GOP does well there too. The real gerrymandering problem in this country springs from the effect of illegal immigration in producing more democratic seats in primarily democratic states.

How does this happen, you ask? Ever heard of the census? That’s how we determine how many people are in the country, and that is the number we use to draw Congressional Districts in each state. We also apportion federal dollars to those states and provide electoral votes based on those numbers.

You probably never gave this much thought, but did you realize that California already has a bunch of Congressional seats that exist solely due to the Census counting illegal aliens?

Why are we providing Congressional representation for people who are not Americans, and why would we ever reward sanctuary states with more federal money and more congressional power for being home bases for illegal aliens?

First, like it or not, the Census, inexplicably counts illegal aliens. The argument for doing so makes no sense at all. Advocates claim that citizens in those states would be unfairly penalized by losing federal dollars if the Census didn’t count illegal aliens. No. In the present system, those states and their citizens unfairly receive federal dollars to support illegal immigrants.

How else does this affect you? Consider this, California has Congressional representation for 2.3 million illegal aliens, using old, 2014, numbers. Not one person in California thinks that number is real or legitimate. But, let’s use this otherwise mainstream media trusted source provided by the pew research group.

A Congressional district averages roughly 700,000 people per Congressperson. That means, California has at least three more Congressional seats, and more electoral votes, than it should have … if we were counting only Americans and legal residents.

It’s no coincidence that the bluest states on the map have the most illegal immigrants. The real question is this … what are we going to do about it?

Article 1, Section 2 of the Constitution discusses the Census and makes clear that apportionment of representation and taxes are by the number of people. Obviously, we don’t collect taxes from nor return them to illegal aliens, and we certainly do not provide them with Representation in Congress. Indeed, they cannot vote in Federal elections, which means they are not intended to be represented there.

Yet, they are … and in some states, they control whole districts, or wildly swing districts. Indeed, if California had to lose three Congressional seats and apportion its representation among legal residents, it would likely lose three democratic seats. In so doing, it would make many other districts more competitive and subject to possible wins by Republicans.

This citizen’s only count also would affect election outcomes in nearly every state in the Union, where razor-thin margins of victory might easily flip if Districts were properly drawn to represent only citizens and those here legally. Populations of illegal aliens in the numbers of 300,000 to 700,000 reside in states like New York, New Jersey, Maryland, Virginia, North Carolina, and Georgia. Do any of those states sound like they recently had tight races?

In Virginia, multiple Congressional Districts flipped on a scarcely a few thousand votes.

In that state, Democrats have sued alleging that Republicans gerrymandered Districts by packing them with “too many” minorities. (Virginia averaged the number of minorities in historically “minority-majority” districts and thus used that number to build its redistricting plan. The court found this to be racial meandering). But Virginia, according to Pew, had over 300,000 illegal aliens in 2014, and even if you thought that low number was then, it is larger now.

What might have happened in Virginia if the Census didn’t count illegal aliens and if the Districts were drawn based on legal residents? The GOP might have held the seats it lost, or even gained a seat, that’s how close it all was under the current system that counts illegal aliens.

The Country is gerrymandered, for sure. The party in power draws absurd lines to help it consolidate power. This has gone on forever, with each party using technology to get better at manipulating the power for the purpose of party politics. But, no one is addressing the real problem.

I have written that sanctuary states, governors, and mayors should be properly prosecuted under federal law. I won’t hold my breath. However, I see no reason to transfer wealth and political power to those states for harboring illegal aliens.

Mostly, however, let’s build a Federal government that answers only to legal residents and citizens, and that uses its money solely in support of those here legally.

Note: The number of House Seats never changes, obviously. However, the size of the Districts and the number in each state are based on population movements and changes. These changes also change the electoral voting power of states over time. Pulling out illegal aliens, who could number 20-30 million, but who certainly number at least 11 million, would make Districts numerically smaller and would change the number of districts in certain states, like California.