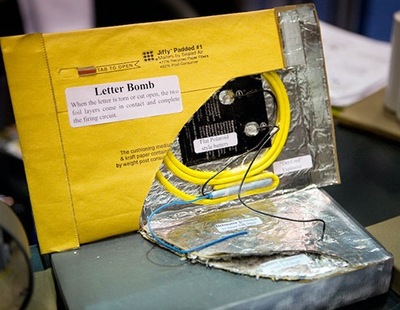 Mail bombs were sent today to several prominent Democrats, including Barack Obama, Hillary Clinton, Debbie Wasserman Schultz, and CNN. Take the “news” coverage of this story with a grain of salt and resist the temptation to jump to conclusions about who did it. Here’s why:

1. Right now, neither we nor the “news” media know who did it.

2. The most obvious suspect is some right-wing whacko taking violent action against his perceived enemies.

3. If that’s the case, he’s obviously a deranged lone wolf given that no prominent Republican or conservative leaders have called for or condoned violence against their opponents.

4. In fact, Republicans up to and including President Trump very quickly and forcefully denounced these mail bombs (which stands in stark contrast with the utter silence of most Democrat and leftist leaders during the ongoing barrage of violence against us).

5. However, the obvious might be too obvious. It is also very possible that the perps were radical leftists seeking to frame conservatives and Republicans to look like terrorists in their own image.

6. The radical left has an incentive to engage in such an act of violent deception as a way of offsetting the public’s disgust with their actual ongoing campaign of violence and terrorism against Republicans and conservatives.

7. It is an objective fact that the left is engaged in such a campaign and that the right is not. (I am working on a lengthy and detailed expose on this subject that will be posted soon.)

8. It is also an objective fact that Democrat and other leftist leaders routinely condone and encourage violence and that Republican and other conservative leaders do not.

9. And it is also verifiably true that the establishment “news” media have been deliberately hiding these facts from the public and have been working overtime to falsely portray both sides as engaging in this kind of violence.

10. Nevertheless, polling shows that the expected blue wave in this year’s mid-term elections is diminishing because of the public’s disgust specifically with the radicalism and violence of the left. They haven’t been fooled by the “news” media disinformation and cover-up.

12. The radical left knows that if they did so, the “news” media would dutifully and enthusiastically jump to the conclusion in their reporting that these acts were perpetrated by Republicans and conservatives as a means of supporting their efforts to draw a false and contrived moral equivalence between the two sides.

13. Furthermore, these leftists would know that sending mail bombs to their own leaders would create the appearance of placing those leaders in danger without actually doing so because they know that the mail bombs would be discovered before they reached their “intended” targets.

14. Finally, consider this question: Which side is the most likely to engage in acts of violence and terrorism? Such acts of by conservatives are extremely rare and are not tolerated in the conservative movement. Such acts by the left, by contrast, have become routine and regularly encouraged by Democrat and other leftist leaders.

15. Whoever did this will be found, and then we’ll know if it was some lone-wolf right-wing whack job or a leftist scheme to make Republicans and conservatives falsely appear to be as violent and deranged as they are.

16. So, don’t jump to any conclusions about who perpetrated these acts of domestic terrorism. Keep an open mind and your powder dry. The truth will out.