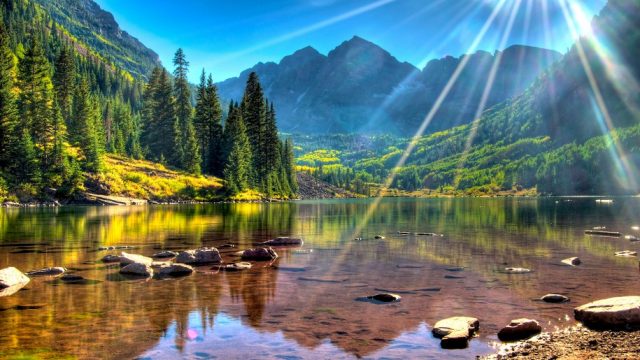 I almost walked away.

I was in a funk as I watched the country I so deeply love sink deeper and deeper into an abyss of cynicism and despair.

I’ve watched the establishment “news” media engage in a relentless and never-ending war on people like me who hold conservative beliefs and values.

I’ve watched the government establishment fabricate a scandal and conduct a Javert-like witch hunt designed to find or invent a way to reverse the results of the 2016 election.

I’ve watched the Balkanization of our politics as people have ensconced themselves in bubbles of validation that leave no room for the possibility that reasonable minds ever can reasonably disagree.

And I concluded that my small voice against this maelstrom was as meaningless and ineffective as a drop of water against a storm.

So, yesterday I told my partners here at Committed Conservative that I was ready to walk away, not only from this site but from social media, news outlets, and the events of the world. I was ready to deliberately plant my head in the sand and restrict my personal focus solely to my family, my work, and my God.

I asked them to give me their thoughts, and, much to my benefit, they did.

Rich Kelsey pointed out that as a result of our hard work, we are now reaching over 150,000 people a month on our site and up to 50,000 people a day on our Facebook page, and we are continuing to grow exponentially. We are building something here that actually can have a positive impact for our country.

Jay Shepard reminded me that when those of us engaged in the fight walk away, it becomes more likely that the evil we are fighting will find us. Jay and I are both Army veterans. He reminded me that as soldiers, we did not have the luxury of walking away if the fight got too hard or if the odds got too long. If the fight is worth fighting, you don’t back down. You see it through and do what it takes to win.

As someone (who probably wasn’t Edmund Burke) said a long time ago, “The only thing necessary for the triumph of evil is that good men do nothing.”

This fight is worth fighting.

As President Abraham Lincoln said in another era that threatened to fracture our nation, “We shall nobly save, or meanly lose, the last best hope of earth.”

Thinking of Lincoln reminds me that our current challenges really are nothing new. The faces and the specific issues change, but the internal tensions have always been there and always will be there.

In 1983 – 36 years ago, Ann Murray released a profound song called “A Little Good News” in which she cited a litany of terrible things happening in the world and prayed for a better world:

Nobody robbed a liquor store on the lower part of town / Nobody OD’ed, nobody burned a single buildin’ down / Nobody fired a shot in anger, nobody had to die in vain / We sure could use a little good news today

Today we look back nostalgically on 1983 as the good ol’ days.

But the truth is that there never has been a perfect world. In 1989, nearly 30 years ago, Billy Joel released a blockbuster hit that reminded us that every generation inherits challenges left by the past and creates challenges for the generations of the future:

But as Billy told us in his 1983 hit “Keeping the Faith,” “The good ol’ days weren’t always good, and tomorrow ain’t as bad as it seems.”

What I’ve realized is that I lost my perspective. Yes, there is a lot of injustice, a lot of unfairness facing American conservatives these days. As we have said so many times to so many liberal snowflakes, suck it up buttercup.

This is hardly the first time in American history that an entire segment of our population has been treated unfairly and unjustly. At our founding, blacks were enslaved and women were considered chattel. It took us until well into the 20th century to make meaningful progress on righting those wrongs.

But it happened because people of good conscience never stopped fighting for the right. They never walked away.

What I will do is try to keep focused on the larger picture. Instead of seeing only the shrill and dishonest war that is being waged against us by the Democrats, the establishment “news” media, academia, popular culture, and the rest of the movement left, I will try to keep it all in perspective.

As the great Louis Armstrong sang in 1967: “I hear babies crying, I watch them grow / They’ll learn much more than I’ll never know / And I think to myself what a wonderful world.”

A year ago, my family and I moved to Colorado. I can now see the mountains – 50 miles away – from my front porch. Last weekend, when we drove up into those mountains, we saw a black bear walk across the road right in front of us.

More importantly, my kids saw it, and I saw the wonder in their eyes.

John Denver’s “Rocky Mountain High” captured the serenity of living in such a beautiful and awe-inspiring place: “You can talk to God and listen to the casual reply.”

So, yes, we’re dealing with a lot of crap these days, but we’re hardly the first generation to have to face such challenges. The fire was always burning since the world was turning.

As Ronald Reagan famously admonished, “Freedom is never more than one generation away from extinction. We didn’t pass it to our children in the bloodstream. It must be fought for, protected, and handed on for them to do the same.”

And so I will not walk away. I will stick, and I will fight for my kids and my country.

But I will also step outside, look at the mountains, and know that this is still a wonderful world.