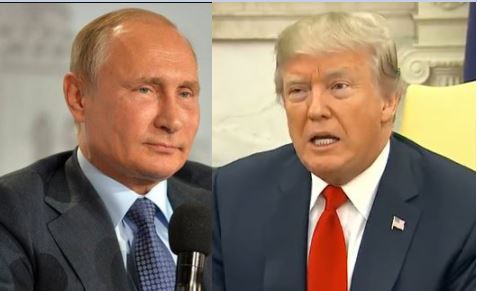 The Trump-Putin Summit is over. It was not a great moment for the United States or President Trump. Only partisans can spin that Trump advanced our US interests.

Still, the outright hysteria over the meeting itself and the outcome is a little tough to swallow.  The hard left is calling a Trump a traitor, and the neocon right claims he is a weak, Putin puppet. The truth is somewhere in-between these politically fanatical partisan positions.

Trump promised in his campaign to open a new relationship with Russia. It remains the second most powerful nation on earth, and its recent expansionism during a weak Obama presidency has netted them territorial, geopolitical, military, and economic gains.

President Trump would have been a fool not to meet with the communist dictator Putin.

Unfortunately, the meeting lacked the strength necessary to properly reset this relationship … which should reflect that the US is the sole remaining super-power and the world’s greatest economy, while Russia is a dying empire foolishly moving away from liberty and advancing toward a war it neither cannot win nor should fight.

Right now, this is the third President that the old KGB Colonel made his bitch.

There is no nicer way to say it. Bush prattled on about looking into Vlad’s eyes. He then ignored the Russian threats and meddling, including massive financial fraud, IP theft, and attacks on US consumers and banking through his organized Eastern-European hacking teams.

Obama was the closest thing to what the left accuses Mr. Trump of being … a co-conspirator and a foreign agent. Mr. Obama was literally caught on a hot mic promising “more flexibility” to the Russians after his re-election.

How did that work out?

Russia annexed the Crimea. It then invaded Ukraine, a country America begged to de-nuclearize because it would protect. Russian military, economic, and geopolitical strength increased dramatically while Putin used Obama like a three-dollar prostitute.

The Trump-Russian reset was necessary. Unfortunately, it was a meeting of a strongman and a man who just wants to be liked. Trump made the meeting about him … shocker … instead of about American interests and American principles.

I give credit to Mr. Trump for having the meeting. I give him no credit for bungling it.

Nothing Mr. Trump could have said or done would have pleased the neocon right or the radical, #altleft that controls the Democratic party and its lap-dog media. However, the President could have given a statement that would have put Putin on his heels and would have defined for the world how we treat expansionist, dictator, thugs.

Had he asked me to write such a statement, it would have read like this for the post-meeting presser.

I thank President Putin for agreeing to meet with me on behalf of our peoples. We lead countries, and in America we do not rule them. This has always been the differentiator.

I am committed to trying to improve relations with Russia, and I think it is in the interest of the Russian people that our countries find a better, bi-lateral relationship built on the principle of liberty, fair-trade, peace, and regional stability. I promised to open that dialogue, and that is why I came here.

It is obviously going to be a process. I hope the President stays engaged in that process because my commitment to improved relationships does not come with changing American principles.

Let’s address the primary matter that burns internally in America. Did the Russians attempt to interfere with and disrupt our national elections? Our intelligence agencies say they did, and an entire body of evidence shows that conclusion to be true. Russia did it that that year, and it has interfered for years before 2016.

President Putin denies these efforts, and that is a barrier to trust.

President Reagan once said of strong relationships between our two countries that when dealing with each other we should “trust but verify.” The first part requires trust, and we cannot trust a country that does not take responsibility for its actions. We already verified.

Now, let me be plain. Since the rise of totalitarian regimes in the former Soviet Union, America too has “meddled” in the internal affairs of Russia. We did so to bring liberty to her people … the birthright of all humans. The Russians meddle to bring chaos so that a dictatorship may gain geopolitical power over another country.

Therein lies the primary reason why we are world’s largest beacon of liberty, and why Russia has reverted to phony and rigged elections.

America can’t be pushed around by anyone. We freed the world of worse tyranny and far greater threats. It is a waste of time, money, and resources to invest in tyranny.

We don’t harbor ill-will as a nation unless attacked. But we will prioritize our agreements and choose our friends based upon those who show, through actions, that they want to be part of the community of nations.

I will continue to work with President Putin to encourage him to do so on behalf of his people, a proud, strong, vibrant, and innovative society that has endured, for far too long, the constraints of a government system founded in tyranny.

The Russian Government can take four immediate steps to earn our trust.

First, admit that its agents attempted to interfere with and influence our 2016 election. That’s easy. Second, it should withdraw its troops and government from the Crimea. Third, it should cease all hostilities and withdraw from Ukraine. Finally, it should end its support for the terrorist Bashir Assad in Syria.

Mr. Putin rules Russia with an iron fist. He could take all these actions tomorrow if he so chooses. I hope he will. The world hopes he will.

We are not threatening military action or confrontation over these matters. We are, instead, promising leadership.

We will not and cannot reward Russia for this kind of anti-liberty conduct, and as such we will not welcome them into the fellowship of nations who trade and prosper based on the trust that is essential in a civil society.

It is for Russia, as then-candidate Reagan once spoke, a “time of choosing.”

Only the Russian people and a free, open, democratically-elected government can work to make Russia great again.

The path of tyranny is a one-way road to the ash-heap of history. Mr. Putin should get off it, abandon his vehicle, and take the path of liberty, less-traveled by his government. It will make all the difference.

How the Super Bowl Reflects Our Politics