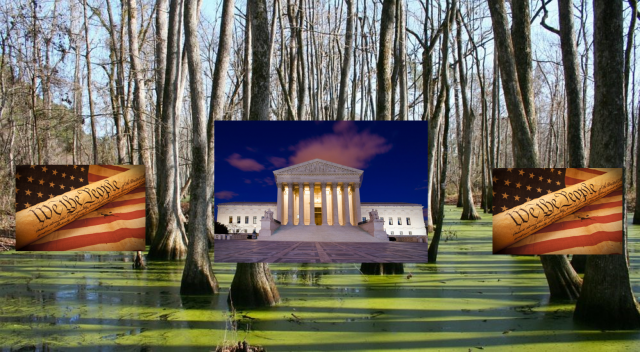 The President is interviewing candidates to replace Justice Kennedy. The left is running misdirection and hate campaigns, and legal nerds and experts are all floating names as front-runners. For the media, the name is the big question. For Constitutional conservatives, the principles are what we care about for a Supreme Court nominee.

Our Supreme Court Nominee must adhere to the Constitution, and he or she must vote to end the abusive and expansionist role of the High Court. We want a swamp-free, all-natural constitutional conservative.

Here is what a real, all-natural, swamp-free, constitutional conservative nominee looks like:

Our nominee does not use the court to expand or contract rights, but instead limits government intrusion on rights and returns all nonfederal issues to the people.

Our nominee must be a 10th Amendment crusader.

Our nominee gives no deference to federal agencies on anything.

Our nominee does not permit delegation of lawmaking to federal agencies through bureaucratic “rule-making.” That’s an unconstitutional double-delegation legislative authority.

Our nominee is not a judicial protectionist and does not create artificial, court-made doctrines that are extra-constitutional, such as Stare Decisis.

Our nominee sees no constitutional rights for foreign aliens in our country illegally, but only permits them protections granted through ratified treaties by and between the countries.

Our nominee not only puts American Citizens first, it applies Constitutional rights and protections solely and exclusively to them.

Our nominee does not peer into the 14th Amendment to find new laws or rights.

Our nominee does not support the Constitutionally incorrect notion that the children of those who illegally entered our country receive birthright citizenship because geography trumps legality for the grant of citizenship.

Our nominee does not think illegal aliens have a Constitutional right to a K-12 public education, and therefore finds that Plyler v. Doe must be overturned.

Our nominee finds the Constitution silent on the issue of abortion and being lucid and capable of reading the 10th Amendment must overturn Roe v. Wade.

Our nominee can read, understands liberty, and recognizes that the Constitution does not permit government to regulate what we may grow to feed ourselves, and thus must overturn Wickard v. Filburn.

Our nominee thinks its powers are limited, and the courts below it are even more limited.

Our nominee looks at a case controversy not as an opportunity to increase his or her own power, or any power of either of the two other branches of Federal government. He or she sees only the opportunity to give power and liberty to the people.

I don’t know who that’s nominee’s name is right now, nor am I convinced such a person exists.

The left thinks the President’s potential nominees are all right-wing and out of the mainstream. That’s funny, I think they are grade-A establishment types and representatives of the status quo.

Give us a smart, sophisticated, principled conservative who will fight for the people using our Constitution. Surprise me by choosing a conservative who is neither of the swamp, nor has been packaged in a legal plant that contains swamp water.