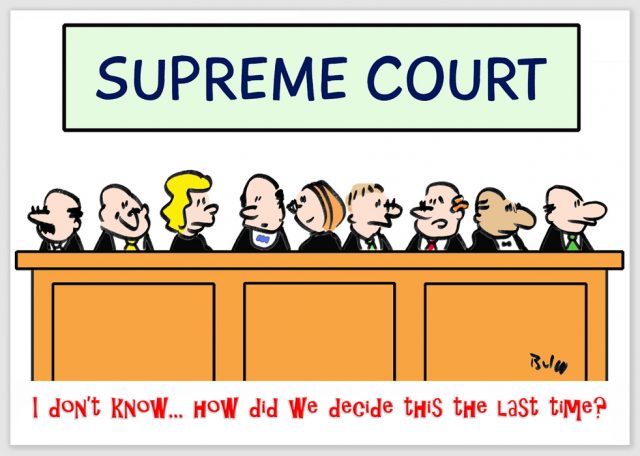 Vertical Stare Decisis means that lower courts are bound, in essence, by the rulings or precedent set by courts of higher authority.  More commonly, however, the doctrine of Stare Decisis is used with respect to what is called, horizontal Stare Decisis.   It sounds a bit sassy, really.  And, ironically, it usually means someone is getting screwed.  That someone tends to be the people and their elected representatives.  Legal scholars will tell you that horizontal Stare Decisis is a well-founded principle that tells the Supreme Court that it should give deference to its prior decisions.

The concept behind this principle is that settled law, even if an imperfect law, is better as a matter of policy than if Courts were to keep changing the law.  The argument that predictability in the law is necessary is not meritless.

Fidelity, however, to Stare Decisis on the Supreme Court is almost theological.  It is akin to the notion of the thin blue line.  In this case, think the thin black line.  Those who wear the robes protect and honor those in the club that wore the robes before them.  In order to disturb settled law, the law must be more than merely imperfect; a change in the law must be facilitated by factors that are compelling.

Stare Decisis is a legal fiction.  It knows no basis in our Constitutional system.  It is an artificial construct hoisted on the petard of its own wrongfulness. The fallacy of horizontal Stare Decisis lies in the notion that law is and should be made, and then protected, by Courts.  Adherents to the principle of Stare Decisis included Justices from both sides of the political spectrum.  In that respect, the Doctrine is exposed for what it really is – a system of power shifting from the legislature to the High Court.

What the doctrine says to Americans is simple; the power to change the law is best laid in our hands, as the whims of democracy present a danger when entrusted to just regular people.  Nothing screams tyranny more than an elite few watching out for the unwashed masses, ensuring that the symbolism of freedom isn’t confused with the messy reality of freedom.

Stare Decisis is a defeat for federalism and our representative republic.

In the American Constitutional system, as designed in 1787, the power of the Federal Government, including the Courts, was limited.  Indeed, as Madison wrote in Federalist 45, “the powers delegated by the proposed Constitution to the federal government are few and defined. Those which are to remain in the State governments are numerous and indefinite.”

In a perfect world, the Supreme Court would be an umpire.  It would call balls and strikes, but it would neither hit, field nor make the lineup. Likewise, it would not make pitching changes.  Once the legal call is made, the issue would be returned back to the legislature for the making of law.  Let me give you an example.

At 60+ pages, the Roe Court admits it is making up the law.  Now, for many who believe in the right of a woman to terminate her child’s life, the outcome is fine, irrespective of the means.  Putting aside one’s rooting interest in any issue, the pressing concern is whether the outcome has fidelity to the principles of the Constitution and Federalism.

The Roe case was quite possibly the easiest legal case ever to come before the Supreme Court if decided on Constitutional principles rather than political concerns.  The opinion could and should have been written on a cocktail napkin.  If based on the Constitution, it would have read like this.

“The Constitution, a document of limited and enumerated rights designed to constrain the federal government and its power over the people, is silent on the issue of abortion.  The right of the people, through their elected state representative, is nearly unlimited. The founders crafted the Tenth Amendment for the precise purpose of leaving matters of public policy to the people in the absence of a federal issue.

Abortion is not a federal issue.

The State of Texas, through its duly elected officials, has outlawed the practice of abortion.  Nothing in the Constitution permits this Court to interfere with that decision, irrespective of the personal or policy views we as Justices may have on the complex, emotional, human issue.”

Constitutionally, that was the job and only role of the Court in that case.

When the High Court enters the law-making business, it steps upon the rights of the people.  When it creates artificial doctrines that it uses and applies to further consider how it will create, keep, or protect the laws it wrongfully decrees, it makes a further mockery of our Constitutional system.

Doctrines such as Stare Decisis are not created for evil purposes.  They are created for intellectual purposes.  Unfortunately, they place the fate of issues to be determined by the people in the hands of elite rulers. The intent of the benevolent ruler is to rule fairly, justly, and under principles and guidelines that make sense and lend toward a coherent public policy.  It is still tyranny and an improper usurpation of a legislative function.

These benevolent, intellectual exercises happen to impose a cost on our freedom, a toll on our Constitution, and they are nothing less than an effort to restrict our rights to make law.  Stare Decisis is a defeat for freedom, federalism, and the numerous and virtually unlimited right of the people to make law.

In the case of Roe v. Wade, it was the first of many devastating blows that led to the death of the 10th Amendment … and the right of the people in their states to make laws as they see fit.

The issue of Stare Decisis got hot in the last few days related to the Supreme Court vacancy and Roe v. Wade. I wrote the above piece as a Note on Facebook on February 29, 2012.  It was right then, and it is right today.