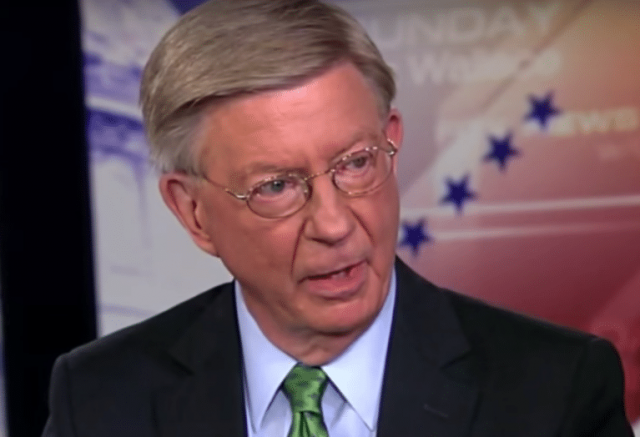 In a recent column, “Conservative” George Will announced that he has left the GOP and that Republicans and conservatives should work to elected Democrats in the 2018 mid-terms.

Will wants to stop President Trump and the weak GOP Congress that does his bidding. Every network waved his anti-Trump screed of twisted and failed logic before the public of proof that even the great, conservative Mr. Will couldn’t take the new GOP.

George Will is a petulant, angry, little man whose entire premise is antithetical to conservative values.

For a DC elitist who writes his pieces so that commoners must use a dictionary and thesaurus to read them, he sure grades a zero on logic. His headline can’t bury the flaw in his thinking, even if he shrouds it with verbosity, pomposity, and misdirection.

To expose Will, I want to keep this simple to maximize the reach to most people. Got that Georgie?

Mr. Will’s flawed premise is that to stop Trump and the direction of the GOP that he now dislikes, conservatives must work to elect Democrats.

Does that make sense to you? If it does, you are probably a Democrat. If not, like Mr. Will, you are an individual who has confused anti-Trumpism with conservativism. I’ve written endlessly on that subject but suffice to say, Conservatism is much bigger than anti-Trumpism.

Those who confuse their hate for one man with their obligation to promote conservative principles are not conservatives.

I get it Mr. Will. We all do. You don’t like President Trump. You are part of the organized War on Trump.  I named you in that indictment in February of 2017 and look at you now coming out of your foxhole to be recognized. Good on you.

Here’s the thing though. Don’t try to use conservatism to fuel your personal animus. Don’t pretend that conservativism is served by electing Democrats. It’s not.

The Democratic Party is for abortion. It is for open borders. It is for division by race. It is for the unconstitutional and anti-American practice of racial preferences. It is for socialism. Heck, it just unseated a long-tenured Congressman from its own party with a socialist nut-case in New York. The party is weak on Islamic terror. The Democratic party thinks American exceptionalism is some form of white oppression and foolish, collective arrogance.

So, Mr. Will, you think Conservatives should elect Democrats to reform the Republican Party and punish Trump? You’re either an idiot, or you think the rest of us are idiots.

You join the ranks of fools, like your fellow, snot-nosed, mealy-mouthed, elitist, faux-conservative, David Frum, the conservative pretender who wrote the so-called, “Conservative case for Voting for Hillary Clinton.” There never was one.

Why is it that the New York Times and the Washington Post have three “conservatives” who are always trying to get Republicans to vote for Democrats? I didn’t forget you Jennifer Rubin, the least informed pretender of the group.

I get it Mr. Will. We all get it. You don’t like President Trump. You disapprove of his conduct. You doubt his conservative heart. You fear his lack of understanding and intellectual depth. You see him moving the GOP in a direction of nationalism and populism over conservatism.

Get in line crybaby.

I and innumerable other real conservatives have written honest critiques on those subjects. We get it. Here’s a tip little fellow … I am actually a lot smarter than you. Guess what, so are a whole bunch of Americans, including good, strong, hardworking regular folks who understand what conservative values are even more than you and me.

They don’t think Trump is perfect either. Thank God. Those who do, and those who raise the cult of personality over principles are fools … and they are dangerous … just as dangerous as people like you who raise their hate above conservative principles.

The difference, Mr. Will, between real conservatives and you is that we don’t elevate our hate over our principles, and we don’t abandon conservative principles to feed that hate.

You want to punish Trump and reform the GOP by electing enemies of conservatism, liberty, free-markets, law and order, and innocent babies.

That’s dumb. You sir are stupid or dishonest.

I would like to reform the feckless, weak, big-government, unprincipled GOP too. I’d like to shake the President and smack the silly out of him, metaphorically speaking my Secret Service friends.  I’d like to get more Reagan and less crazy narcissism too.

I intend to promote conservative candidates to take the seats of weak republicans.

I don’t propose to fix Trump or the GOP by promoting the deeply flawed idea of that America hand over the levers of government power to the party of hate, fear, division, and socialism.

You, Mr. Will, propose that America surrender to the resistance so that you can be invited to cocktail parties again. How brave.

Update: I drafted this opinion piece and published it just 30 minutes before Justice Kennedy retired. Just remember, Mr. Will wants you to elect Democrats … to protect conservatism from President Trump. Tell us, Mr. Will, how does that get you the 5th conservative Justice?