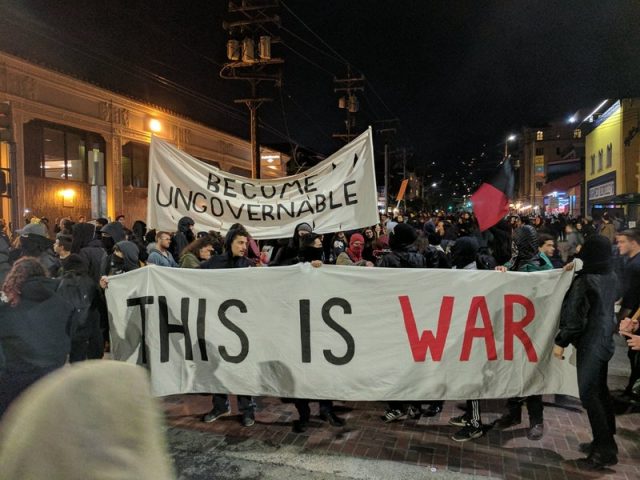 So, “Aunt” Maxine, you want to pick a fight?

But you might want to stop and think about who you’re planning to attack – who you and your leftist followers are – and who we are.

You are a woman who for decades has sought to advance herself simply by screaming at people, starting with your righteously indignant lectures to your brother-in-law, Fred, in the early ’70s.

And you’ve had success with that tactic within your safe dark blue congressional district, oblivious to how the rest of the country was rolling their eyes at you. That’s why you’ve never actually accomplished anything in the 27 years that you’ve been in Congress.

But now your day has come. A generation has arisen that is so clueless about how the world works that they, like you, think that socialism is ideal and capitalism equals fascism. This generation is just ignorant enough to be tailor-made for a self-righteous leftist demagogue like you.

And so now, after all of these years, you’ve finally got your army to take on Republicans and conservatives, and as their general, you’re gleefully commanding them to go into battle against us.

“Let’s make sure we show up wherever we have to show up! And if you see anybody from that Cabinet in a restaurant, in a department store, at a gasoline station, you get out and you create a crowd! And you push back on them! And you tell them they’re not welcome anymore, anywhere!”

But who and what exactly is your army?

They are the college kids heaping up tens of thousands of dollars of debt to get their degrees in Women’s Studies and Human Ecology while spending their time in college fighting for safe spaces to protect them from the world’s microagressions.

They are the haughty professors who sit in their ivory tower offices secluded from the real world spouting their Marxist philosophy to kids who are too young and inexperienced with the world to recognize what a crock they’re being fed.

They are the deadbeat unemployed drug-addled twenty-somethings who live in their parents’ basements and use social media to tell everyone else how we ought to be living our lives.

They are the bitter old single women stuck in the ’70s Women’s Lib movement who spend their time planning rallies that encourage people to wear pink pussy hats to fight for rights that they’ve had for decades.

They are the bitter bullied high school kids who want the rest of the world to feel as helpless as them and so fight against the people’s right to own guns.

They are the pampered celebrities who talk tough against us knowing that they will never ever have to actually put their fists where their mouths are. (You talkin’ to us, DeNiro?)

They are the “news” media who have so badly abused the trust they once had from the public with agenda-driven #FakeNews that no one takes them seriously anymore – the “reporters” with glass jaws who arrogantly smear us on a daily basis but whine and cry any time we respond and call them out for their vindictive disinformation campaigns.

We are the soldiers, sailors, airmen, Marines, and generations of veterans who were trained to meet the combat standards of the mightiest fighting force the world has ever known.

We are the cops and firefighters who every day face our fears and stare death in the face to keep the communities that we love safe.

We are the rednecks on whom you so condescendingly look down who learned how to shoot a gun before we knew how to ride a bike and know how to survive off the land without any modern conveniences for as long as we ever have to.

We are the bankers and lawyers and CEOs and small business owners who have spent our lives learning how to read people and persuade people and do whatever is necessary to overcome any challenge and succeed in whatever we do.

We are the rich who have all the resources we will ever need to defend ourselves and protect this country from any threats you try to pose to it and us.

So, take a long hard look at your army and ours and tell me, do you really think you can beat us?

This is the hard truth that you are facing, whether you want to recognize it or not:

You and your leftist followers have been getting away with acting tough because no one on the right is taking you seriously. We know you hate us, but we don’t hate you. To put it bluntly, you don’t matter enough for us to expend the energy it would take to hate you.

And so, because we are ignoring you, you get away with forcing conservative speakers off college campuses and forcing Republican women out of restaurants and encouraging people to rape the 12-year-old son of the President of the United States.

I’ll give you this much: You’ve proven that you’re tough enough to take on women and children.

Well, in fairness, you did get away with shooting a sitting United States Congressman last year.

But don’t mistake our passivity for weakness. You exist because we allow you to. If we ever wanted to take you out, you would be gone. You wouldn’t stand a chance. All that would be left would be your stench, and even that would disappear over time.

Fortunately for you, we conservatives are guided by a strong moral compass. We are peace-loving people. We just want to live our lives and enjoy the bounties of freedom that our country was established to guaranty. The last thing we want for our country is division and violence.

But there is a limit to our patience.

At some point, in your delusional arrogance, you are going to push one of us too far. When you do, that person is going to defend himself with the very Second Amendment rights that you so ruefully hate and oppose.

Or maybe one of you will pick up where you failed last year and kill some unsuspecting Republican or conservative in the deluded but sincere belief that you will be hailed as a hero.

Either way, once you strike that spark, you will unleash the Hounds of Hell.

Once you awaken that sleeping giant, there will be no going back. We will not provoke a war, but once attacked, we will fight back with a ferocity that is beyond your snowflake imaginations. We will fertilize the Earth with your delusional carcasses, and you will never know what hit you.

So, “Aunt” Maxine, do you really want to pick a fight with us? Do you really think it’s a good idea to poke this sleeping bear? If so, go for it, and when you do, we will crush you like the bugs you are.