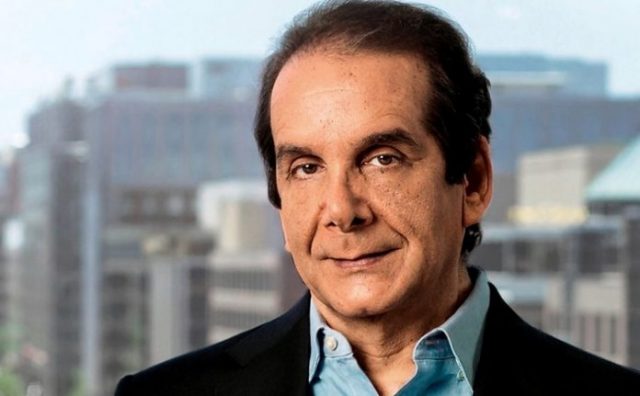 Charles Krauthammer passed away and with him America lost a chunk of reason and propriety, resources it no longer has in abundance. America lost an invaluable resource and cultural guide. It is no coincidence that as Dr. Krauthammer receded from public life due to illness, public discourse continued its death spiral.  Perhaps we can use his passing as a call to reform.

Many will and already have written kind words of the doctor. His resume was impressive, his writing unparalleled, and his voice the hallmark of lucidity and respect. I did not agree with him on many issues, but we all agree that his writing was special.

For novices like me who dabble in punditry, if Krauthammer were Picasso, I am still drawing with stick figures.

Krauthammer was a thinker. He thought often about complex issues. He then set out to find answers, challenge conventional wisdom, and like most great minds, he spent more time testing his own conclusions to ensure their soundness.

His writing was cast in moral conviction, rather than a need to be haute, bombastic, preachy, or superior. Krauthammer eschewed the prurient political urge to be a provocateur, something the weak like me really can’t do as well, if at all.

He didn’t need to be heard or read. He wanted to be respected for the power of his reasoning and not the fire his prose could give to the unwashed masses. He tried to elevate public discourse by writing in a style that reached people of every educational background, distilling the complex into crisp, sound explanations with the heft of common sense and the hue of moral authority.

He wrote to inform, not to belittle or prove himself superior. He had a strong emotional IQ, and he didn’t need to be liked, followed, or accepted. He needed to find answers that made sense for the human condition.

Where do we go to find more of that?

The bright young conservative Ben Shapiro wrote a wonderful tribute to Krauthammer at his Dailywire. It is worth the read, as is much of his work. Shapiro could be that next voice of reason too. I am optimistic about his vision and unbridled effort to stay true to principles over party and political personalities. He does it better than me, though neither of us is the good doctor.

For the many pundits, journalists, commentators, and political pugilists, Krauthammer should be our model. Rather than trying to be heard over the din with yet another outrageous story, headline, or claim, why not stand out from the crowd with the power of persuasion born of reason and girded by an unwavering moral clarity?

It’s a challenge to take the road nearly never traveled.

Consider this, however; In a time when reason and propriety are in short supply, we can ill-afford to lose the man whose supply of both was bountiful. We may never write like Charles. We may never think like Charles. But nothing should stop us from thirsting to be informed like Charles. That’s a great starting place.

For the friends and family who lay to rest a loved one, we pray your grief is soon assuaged by the loving memories of the man you knew best. Thank you for sharing him with us. We will try to be better in his example.