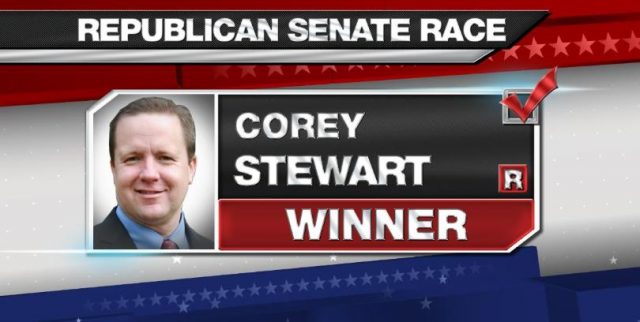 Corey Stewart, the pugnacious Prince William County brawler who seeks and finds bad press pulled out a win in the GOP Senate primary last night, even though a clear majority of Republican voters didn’t want him. Stewart, who first made his name gallantly fighting the illegal alien invasion of Prince William County, has now become a lightning rod of controversy.

First, Corey Stewart did Nick Freitas a huge favor by winning this primary.

By winning, Stewart ensured that he and not Freitas would take the double-digit Senate Seat loss to the feckless, Tim Kaine. Freitas will live to fight another day.  Perhaps he will re-emerge in the post re-election defeat of President Trump, when the Commonwealth may again consider responsible Republicans for statewide office.

Second, Corey Stewart’s win will be the implosion of the Virginia Republican party. That may be good if it rebuilds itself into something optimistic, constitutional conservatives can support. It could be very bad if the ruins of the GOP are appropriated by Stewartism … in its current form.

The recent Stewart movement has been a cancer on the Virginia GOP. It has attracted nuts, screw-balls, and lunatics. His win gives credence to the charge that the Virginia GOP has turned to radicals with dubious, unprincipled beliefs.

This may seem a harsh assessment, as I have written good things about Stewart in the past.  I did that because the Stewart who fought against a titled wave of illegal immigration, while leading a growing county to prosperity, was a Stewart worthy of consideration. He is no longer worthy.

Stewart’s brigade of reactionaries and true believers are cultish, politically tone deaf, and incapable of reason. Their political strategies are thoughtless, pessimistic, myopic, and self-destructive. They are energy feeding the GOP civil war, and they are true believers rebranding the GOP.

The Stewart primary win will burn the Virginia GOP to the ground. It will take years to rebuild, and the party will not function effectively, state-wide, until after 2020, at the earliest. Stewart will destroy down-ballot races as well, crippling the Commonwealth’s GOP and, ironically, putting local control and state control in the hands of more open-borders crackpots.

Update: The GOP lost two US House Seats by thin margins, all attributable to the weakness of Stewart at the top of the Ticket.

Corey Stewart will lose this Senate race by no less than 13 points. He will almost certainly lose it by 15-20 points.

Update … He did lose exactly as I predicated, here are the final results:

And, in some foreseeable scenarios, where he and his merry band of torch-holders get the press they try so hard for, Corey Stewart’s campaign has a better than 50% chance of losing this Senate race by 20 points.

Mr. Stewart is not Donald Trump, and Virginia has no electoral college. The GOP national party will choke him off from any money, and he will limp to the “finished” line utterly destroyed.

I am telling you what is going to happen.

I wasn’t a party insider or Freitas campaign flack. In fact, I stayed out of this mess. Just reading the Virginia political blogs and social media sites made clear that reason was not to be had in this firebrand fight. The GOP can’t remake itself until the people who hijacked it are vanquished through electoral humiliation.

Even then, those praying to the false idol of Stewartism will blame the loss on others.

The good news for Republicans and any real conservative interested in a finding common cause with a viable Republican party is this. Stewart’s primary win is his last. His political career ends this November.

If the GOP were smart, it would regroup, rebrand, and begin to plan for life as a minority party until it can build back the faith of all reasonable voters, including the many moderate and independent Virginian’s who want a message of fiscal responsibility, practical governance, and economic optimism.

I’d start holding those meetings today, and I would do it by inviting actual conservatives, Republicans, and independents.

Stewart’s primary win will remake the Republican Party in Virginia for better or worse. It will either reaffirm its Reagan pillars of optimistic conservatism rooted in limited and responsible government securing our liberty, or it will be an anger-driven, dark, foreboding band of back-benching misanthropes.