Kanye West is the latest target of leftist hysteria after firing off a string of tweets expressing support for President Trump and encouraging people to think for themselves. One tweet included a picture of his signed “Make America Great Again” hat suggesting that the two share “dragon energy.”  I’m not sure what that is, but let’s be honest…it sounds awesome. 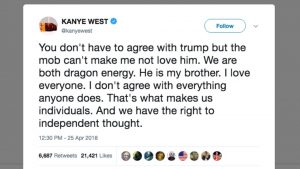 In response, the Washington Post published a column titled “Kanye West, Alt-right Darling.”  CNN’s Brian Stelter summed up that piece pretty nicely: “Right now he is acting like a gift to racists because he is saying these sorts of ridiculous things that are usually promoted by white nationalists, by fringe groups, by fringe individuals, mostly on the internet that promote racist ideas.” As Steven Colbert put it on The Late Show, Kanye
West “has lost his mind”.

Never mind that Kanye is known for being somewhat of a kook.

This is the guy who said on national television during NBCUniversal’s “A Concert For
Hurricane Relief” after Hurricane Katrina that “George Bush doesn’t care about black people”. This is the guy who tweets about marble conference tables, fur pillows, and antique fish tanks. See Josh Groban sing Kanye’s tweets from this clip from Jimmy Kimmel Live. But now that he’s tweeting like a bumper-sticker-conservative, he’s an unhinged member of the alt-right?
Yeah, probably not.

Meanwhile, on the right reactions seem to break down into two groups.

In one camp is the celebrity worshipers. In their desperation for attention and legitimacy, they’re ready to appoint every celebrity who says anything mildly conservative as a thought-leader of the conservative movement. They tend to be critical of celebrity activism unless that celebrity says something they agree with in which case they make him President of the United States.

In the other camp is the buttoned-up conservative intelligentsia. They’re immensely critical of our celebrity-obsessed culture and often scoff at celebrities’ lack of expertise and political activism.

Both lines of thought are silly and over-broad.

Is Kanye West the next William F. Buckley? Of course not. Should we be waving around our “Kanye 2020” signs? Please God no.

Kanye West is doing something important. Kanye’s basic message is that people are individuals and therefore aren’t obligated to think as a member of any particular group. This is a message that is sorely lacking in our political discourse today.

For a long time, the left has attempted to narrow the window of acceptable thought by publicly shaming those who deviate from the prevailing leftist orthodoxy. They’ve prevented Americans from having that conversation. Kanye is challenging the idea of racial solidarity and identity politics and opening up the debate. That’s a brave thing to do, especially for someone in Hollywood.

Conservative intellectuals often sit around pining for a more sophisticated culture in which people listen to Brahms and Beethoven and have deep political discussions in reference to Thomas Sowell and Milton Friedman. I share their sentiment. I would love to live in a more informed culture that reads political philosophy and listens to music that’s not hot garbage. But that’s just not our culture right now.

Here’s the reality: more people interact with Kanye West and the rest of Hollywood on a daily basis than they do Thomas Sowell and Milton Friedman. Today’s celebrities are not deep political thinkers. They’re people like Kanye West. Conservative thinkers are tremendously important (and I’m quite frankly more familiar with them than I am with pop culture icons), but the average person just isn’t exposed to them nearly as often as they are to someone like Kanye West.

None of this is to say that celebrities should be our political leaders or that we should seek to disseminate our ideas solely via celebrity. It’s not even to say that they know what they’re talking about in a great many instances. But it is to say that they’re influential. Just look at black male approval for Trump which, according to a Reuters poll, has doubled
since Kanye’s tweets.

If politics is truly downstream of culture, then we shouldn’t pooh-pooh celebrities when they say good, conservative things just because they haven’t written a 500-page book on the topic.

Kanye West isn’t a genius. He’s a celebrity who sometimes says and does dumb things that we should ignore. But this time he said something good. Surely we can agree that when conservative ideas are championed by our most influential cultural figures, that’s a victory. Let’s just enjoy it.

Syria Strike: Trump Puts The World On Notice That America Is...