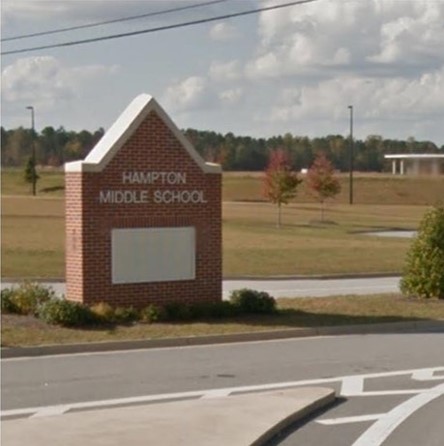 According to Blue Lives Matters, the social studies class of 12 and 13 year-olds had to:

“For this assignment, you are writing a letter to the lawmakers of the United States. The purpose of this letter is to pressure lawmakers to have stricter gun laws in the United States. Your letter should contain at least five complete sentences. Make sure that you use proper grammatical skills when writing your letter,” read the assignment given out by social studies teacher Corey Sanders to his students at Hampton Middle School.

One outraged parent, a law enforcement official, was shocked when he heard about the assignment.

After reading his son’s homework assignment from the teacher, William Lee went into the Google classroom and checked the assignments.

“I looked at it, and I told my son, ‘no, you’re not doing that assignment,’” Lee said. “Then I emailed his teacher the next day and told him that my son would not be writing that.”

The teacher agreed that the boy could skip the assignment without penalty.

However, most parents did not know about the assignment until after it was completed and turned in.  Mr. Lee wondered, “where are these letters now?” Lee also noted that the curriculum for the class showed his son was supposed to be studying Asia, Africa, and the middle-east.

There is nothing in the Georgia Standard of Excellence about gun control in America.

The best description of an assignment like this is propaganda and brainwashing. No honest, thoughtful, intelligent teacher could have crafted this assignment without knowing that he was forcing children to write and create fake letters expressing one point of view on a hot political issue.

It should be a fireable offense.

Teachers in government schools must be vigilant not to bring their personal politics into the classroom, particularly when they have in their charge, young, impressionable minds. 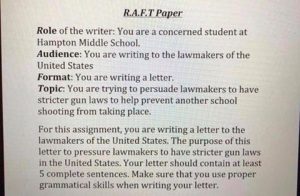 Social studies is an important class, though it has moved far afield of “civics,” where American schools use to teach our children about our government and Constitution. Topical issues like the recent shooting and its relationship to Constitutional Rights might make a great assignment, assuming it fits in the approved standards of the local school.

However, this assignment, if it were created correctly, would have required students to write a letter to their lawmakers expressing their views on an issue important to them … an issue that might include the Second Amendment.

It is hard to imagine a teacher requiring any child to stake out a political opinion of one side, write a letter about it, and sign his or her name to a view in which the child does not share, or may not fully comprehend.