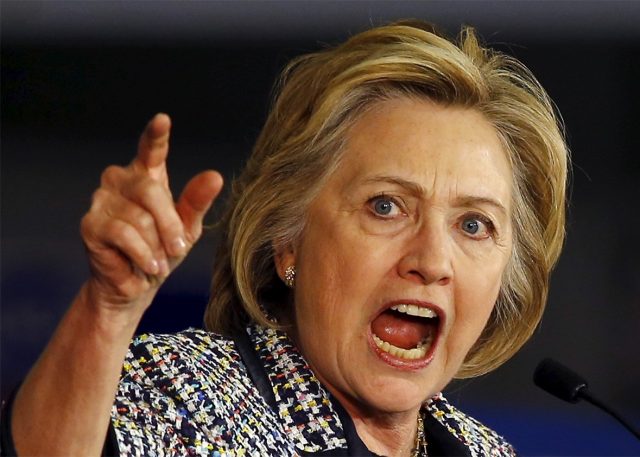 Hillary Clinton’s international Whining Sore Loser Tour has continued into its second year, and it’s just as pathetic as it’s always been.

Yesterday, in a speech in Mumbai, India, Hillary Clinton asserted that she lost the 2016 election in part because married white women can’t think for themselves and unquestioningly do what the white men in their lives tell them to do:

“We do not do well with white men and we don’t do well with married, white women. And part of that is an identification with the Republican Party, and a sort of ongoing pressure to vote the way that your husband, your boss, your son, whoever, believes you should.”

So, if you are among the 52% of white married women who voted for Donald Trump, according to Hillary Clinton you just did as you were told without any independent thought.

Now, can anyone imagine what the response would have been in the “news” media if this statement had been made by a Republican about women who voted for Hillary? But because it was Hillary smearing Republican-voting women, the “news” media have largely ignored the statement.

Well, except for the Washington Post, which wasted no time in running an “analysis” piece arguing that Hillary was right. Raise your hand if you’re surprised.

I mean, even Snopes rated her statement as “mostly false.”

Hillary didn’t stop there, though. She also said that Trump won by appealing to the outright

“And his whole campaign — ‘Make America Great Again’ — was looking backward. You know, you didn’t like black people getting rights; you don’t like women, you know, getting jobs; you don’t want to, you know, see that Indian American succeeding more than you are — you know, whatever your problem is, I’m gonna solve it.”

This is how the most recent Democrat nominee for President of the United States portrays our country to the rest of the world. And, again, the silence of most of the “news” media is deafening.