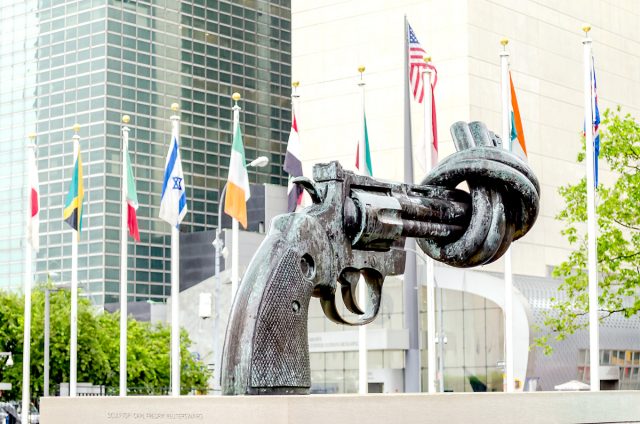 EARTH (Real Fake News) – As we enjoy the blessings of the utopia in which we are now privileged to live, it behooves us to reflect on how we achieved it.

It started with American Schools.

Thanks to the forward thinking of American Democrats, schools across the United States were declared gun-free zones, and, as everyone knows, the horrific string of school shootings that had been plaguing America for years suddenly ended as would-be shooters were thwarted by the signs telling that them they could not bring guns onto school property.

The success of gun-free school zones soon led to declaring prisons, courthouses, banks, and even the White House and the Capitol to be gun-free zones as well. Prison, guards, judges, businessmen, Congress, and the president all finally live their lives with the peace of mind of knowing that no one could hurt them anymore. After all, no one wishing to do them harm could reach them thanks to the signs telling them that they could not bring guns into these sacred locations.

Soon, entire cities, states, and countries had adopted the idea, and, finally, the United Nations passed a resolution declaring the entire planet to be a gun-free zone.

The result, as we all know, has been the greatest peace ever known to the human race. (Will any of us ever forget the heartwarming footage of al-Qaeda, ISIS, Hamas, and Hezbollah coming together to jointly hand in their guns and then embracing members of the Israeli Knesset as their brethren in the human community?)

As the Democrats had been predicting for decades, it turned out that it was the guns that had always been the cause of all human violence. Without guns, all of humanity came together as one universal family of brotherhood. Petty differences like religion, governance, and economic systems were no longer relevant in a world that had eliminated all conflict by eliminating guns.

In fact, as the great pacifist Karl Marx had foretold over 150 years ago, without guns, people everywhere no longer needed governments and worked harmoniously by joyfully giving to society according to their individual abilities and taking only what they individually needed.

Looking back, it seems so obvious now that guns were forcing people to commit heinous crimes. Most of us were too set in our ways to understand this basic fact. It took visionaries like George Clooney, Oprah Winfrey, Nancy Pelosi, and Barack Obama (blessed be their names) to show us the way.

And, sure enough, just as they told us would happen, once we told people they no longer could take guns into protected areas, would-be criminals became free of their guns’ pernicious influence, and all crime ceased as no one any longer had the desire to hurt anyone.

So, as you walk down the gleaming streets of our prosperous planet free from worry or want, never forget that it never would have happened had the Democrats not come up with the idea of telling everyone that they could no longer use guns to commit crimes.