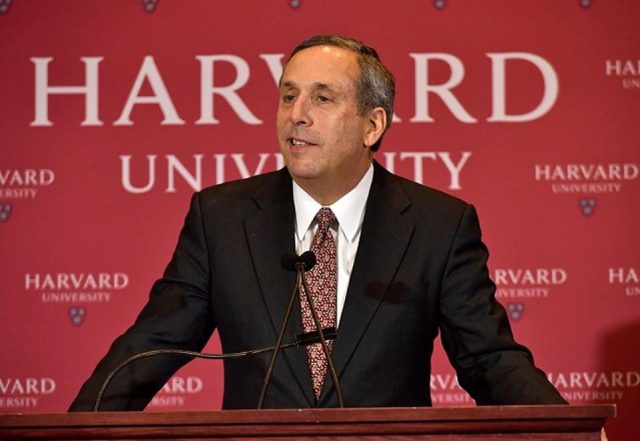 Harvard University searched for a new President and considered a pool of nearly 600 applicants, many with extraordinary backgrounds. It chose the best person for the job, and in so doing selected Lawrence Bacow.  For some, the choice of another white male was an affront and a “missed opportunity.”

The critics didn’t say Mr. Bacow was unqualified, they merely found that his whiteness should have disqualified him. Afterall, why would anything matter in selecting a University President, other than color?

In a “news” article on the choice, the New York Times noted that in choosing Bacow, the search committee had missed “an opportunity for Harvard to choose a leader who would reflect the #MeToo and Black Lives Matter movements.”

Harvard’s famously left-wing, student newspaper, the Crimson, reported that the announcement of Bacow “surprised and disappointed some College students who had hoped a person of color would take the University’s top job.”

Why at Harvard would anyone care about ensuring that a position of excellence is filled based on color?

The Crimson described the incoming president as “the 28th white male to sit in the president’s Massachusetts Hall corner office.”

In an obvious effort to embrace diversity of opinion, The Crimson ran a follow-on op-ed.  It was equally race-obsessed and anti-intellectual.  The column by Ruben Reyes Jr., denounced the choice as “uninspiring and frankly a bit disappointing.” He described Mr. Bacow as “the second white, male economist named Lawrence to serve as Harvard’s president.”

The race-rattled Reyes complained that Mr. Bacow “does not understand, first-hand, what it means to be reduced to your gender or the color of your skin.”

It seems young man, he surely does now.

Not a single criticism appears to be leveled against Mr. Bacow other than the reality that his color was not the right shade to satisfy radical elements on campus who believe that skin color, racial and gender identity, and the most radical elements of certain politically connected movements are all that matter in choosing a President for one of America’s most prestigious Universities.