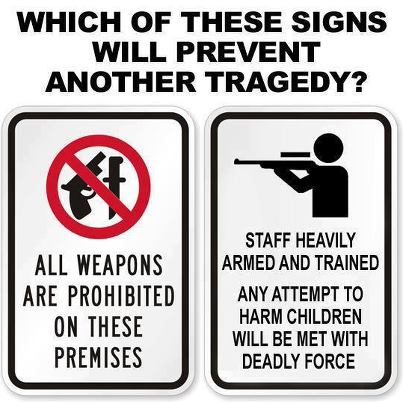 A short quiz: Which these things have the Democrats prohibited from being like the others?

1. Judges and lawyers in courthouses
2. Businessmen at banks
3. Travelers in airports
4. Members of Congress in their offices or in the Capitol
5. Children in public schools
.

The answer, of course, is children in public schools – 17 of whom were murdered by an evil gunman this week.

Everyone in the other four categories enjoys the protection of armed guards. That’s why we almost never hear of shooting incidents in courthouses, banks, airports, or Congress.

But thanks to the Democrats’ so-called “gun-free zones,” most public schools are prohibited from having anyone in their facilities who is armed and capable of stopping a murderous gunman like the one we saw this week.

It’s not like no one knew that schools are vulnerable to such attacks. As the Democrats and their “news” media partners love to point out, our country has seen all too many such incidents over the past couple of decades.

But Democrats are so rabidly opposed to the right of the people to keep and bear arms that they are knowingly and intentionally leaving our children vulnerable to such attacks.

In a perverse way, some Democrats actually seem to relish these attacks as opportunities to run to a microphone and sanctimoniously blame Republicans who defend the people’s gun rights. These Democrats see these attacks not as reminders of how vulnerable they are leaving our children in their schools but as political opportunities to exploit the victims to advance their anti-gun rights agenda.

These Democrats are encouraged by the fact that their “news” media partners eagerly give them public platforms to make these sick and ignorant accusations against Republicans. And they know that these “reporters” will then “report” on these incidents by mirroring those accusations as if their point of view is the only reasonable one and any disagreement with it is fringe and radical.

I’m sick of standing by while Republicans are defamed in this manner.

I’m not a Republican. I’m a conservative independent. But I agree with and appreciate those Republicans (and, in fairness, a handful of rural Democrats) who safeguard our gun rights. And I refuse to allow the Democrats’ shameful, dishonest, and defamatory accusations to go unchallenged.

So, let’s start by pointing out what is obvious to all but the radical leftist Democrats and “news” “reporters”: Depriving law-abiding citizens of the right to keep and bear arms will not make them safer. It will make them more vulnerable to those who are NOT law-abiding and get their guns by any means available.

Yes, I know that it is incredible that anyone needs to say this out loud, but this blazingly obvious common-sense fact escapes the Democrats and their “news” media allies who are consumed by their leftist ideology.

Let me say that again: Our kids keep getting killed in our schools because the Democrats have prohibited the schools from having the one thing that would enable them to protect our kids: Guns.

To illustrate this point: Imagine two houses on the same street. One has a sign in the front yard saying “Gun-Free Zone.” The other has a sign saying “Residents Are Armed and Prepared to Defend Themselves.” If you were a criminal wishing to break into a home, which home would you choose?

Advertising “gun-free zones” is advertising that these schools are defenseless and vulnerable to attack. But then, again, that’s obvious to any rational person.

Countering school shootings is not the complicated and perplexing problem that Democrats and their “news” media partners constantly make it out to be. It’s actually very simple: Make sure that at every school in the country at all times there are several people on the premises who are armed and trained to respond to such attacks.

Obviously, step one in protecting our kids is to repeal all of the Democrats’ “gun-free zone” laws throughout the country and start allowing schools to protect our kids.

One obvious way to do this would be to hire armed guards. This idea is acceptable, but I have one that I think is better: At every school, train a number of teachers and staff on gun skills and safety and have them carry concealed weapons. Offer teachers and staff bonus pay for participating in the program. Do not identify to anyone who the people are who are carrying. And place signs prominently around the school premises warning that the school is protected by armed personnel.

Do this one simple thing, and it is just common sense that school shootings will be dramatically reduced if not eliminated outright.

In any event, those of us who have common sense must no longer allow the leftist ideologue Democrats and their “news” media partners who created the opportunities for these heinous school killings to deflect their responsibility onto those of us who are advocating for policies that would stop them.