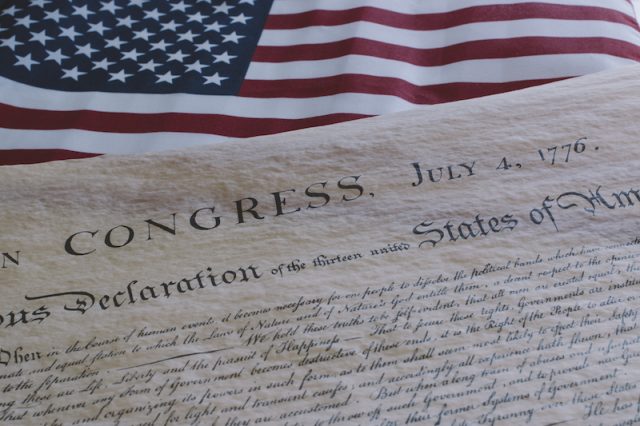 In today’s America, we have two major parties defining “patriotism” in two almost polar opposite ways – and they’re both wrong.

To the Democrats, patriotism is about loyalty and devotion to the government and to their party. To them, patriotism is paying taxes, redistributing wealth, and opposing everything that President Trump and the Republicans do on the basis that it is President Trump and the Republicans doing it. In other words, unquestioning obedience and servitude to their party and government – which is the very opposite of our country’s core principles and values

To the Republicans, patriotism is a love for the flag and the National Anthem, a grand military parade, and baseball caps calling to “Make America Great Again.” In other words, reverence for symbols of their party and country.

But a brand of patriotism that is focused on symbols is empty without a strong focus on the principles that made America great in the first place: liberty, limited government, free markets, strong stable families, faith in God, and a strong national defense to protect those rights and liberties.

Do I have a reverence for our flag? Of course I do. Do I stand for the National Anthem? Again, of course, and I do so proudly. But these symbols are not the definition of patriotism. They are just a component of it.

Real patriotism is a devout dedication and loyalty to America and the core principles on which it was founded. Both elements – country and principles – are essential to real patriotism.

Our Founding Fathers pledged in the Declaration of Independence that launched the Revolutionary War their lives, fortunes, and sacred honor in defense of our nascent nation and its core principles, as set forth in that brilliant document.

They risked – and many gave – their lives and fortunes in defense of the self-evident truths that all people are created equal by God and that God bestowed upon each of us the rights of life, liberty, and the pursuit of happiness.

They risked and gave their lives and fortunes to create a nation rooted in the self-evident truth that “governments are instituted among men, deriving their just powers from the consent of the governed.”

The Founding Fathers personified patriotism and set the example that all future generations have had a duty to emulate and teach their children. As President Ronald Reagan put it, “Freedom is never more than one generation away from extinction. We didn’t pass it to our children in the bloodstream. It must be fought for, protected, and handed on for them to do the same.”

In today’s politics, the Democrats have abandoned any pretense of supporting the core values set forth in our Declaration of Independence. They believe, like King George before them, that power is rightfully held by the government, that our rights come from that government, and that government has the right to bestow and withdraw those rights at its pleasure. They condescendingly scoff at the notion that our rights originate from God (or that there even is an all-powerful God). In opposing the core founding principles of our country, they not only are not patriots; they are the opponents of true patriotism.

Today’s Republicans, by contrast, do advocate for America’s core founding principles, but they are far from consistent in actually fighting for them. The Republicans often substitute devotion to the great symbols of our country for progress in restoring our country to its founding principles. So, for example, the Republicans devote massive amounts of time and energy condemning the unpatriotic actions of many leftists in refusing to stand for the National Anthem while, at the same time, many of them fight to deny rights to homosexuals, Muslims, and others whom they find distasteful or sacreligious.

This week, it was revealed that President Trump has ordered the Joint Chiefs of Staff to plan a grand military parade – as always, in the name of patriotism. After all, what could be more patriotic than seeing our brave and valorous military men and women marching down the streets of our capital with our great weapons and machines of war, right?

The military can only be the symbol of a country whose core identity is centered around the military. That was the case in ancient Rome, in Napoleonic France, in Nazi Germany and the Soviet Union and North Korea.

Do not misunderstand me. I have a deep appreciation and admiration for our military and the amazing men and women who serve in it. I am a veteran myself. But everyone who serves in the military understands that the job of the U.S. Armed Forces is to protect our way of life, not to be our way of life.

So, a great military parade down the streets of our national capital does not represent who we are as a nation. Furthermore, a parade consisting of people who are ordered to participate does not honor those people. If we truly want to display our appreciation for our military, hold an old-fashioned ticker-tape parade featuring people from across the country participating voluntarily to entertain them rather than forcing them to entertain us.

And if we really want to honor our servicemen and women and our veterans, let’s give them the best quality equipment and accommodations while they’re serving and access to the most efficient and high-quality health care during and after their service. Those kinds of substantive actions would be far more meaningful and patriotic than a very expensive symbolic spectacle that would be more akin to an insecure man buying a big sports car (emphasis on “big”) than reflective of our core identity as a nation.

Patriotism does encompass symbols, and like most Americans, I am always moved by our National Anthem, by the reverent display of our flag, by our majestic natural treasures, and by the great monuments in our capital and across the country and the world. But those symbols are only part of the equation. Without an equal reverence for our core principles, patriotism is hollow.

True patriotism consists of a devout love for and commitment to our country and our core principles and values. Without the latter, the former is meaningless.

General George Washington Says It All