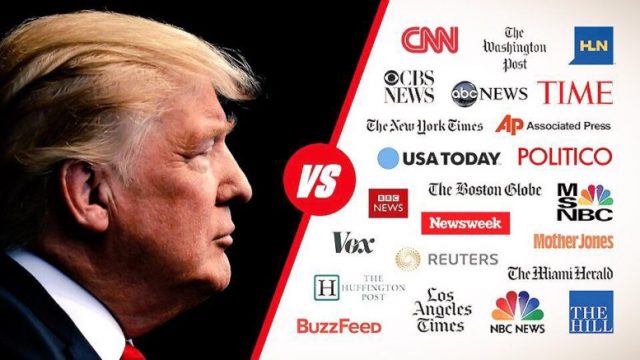 President Trump this week stated that his administration will “take a very very strong look at our country’s libel laws.”

The reaction of the establishment “news” media was predictable, with CNN leading the way by hysterically proclaiming as supposedly objective news that this is Trump’s “latest salvo against free press” and the New York Times following suit by reporting as fact that Trump has a history of “hostility toward traditional press freedoms.”

Press freedom and the press itself are two entirely different things. The former is a fundamental liberty. The latter is an apparatus that operates under that liberty.

Trump’s hostility toward the establishment news media is well-founded. Never in history have the news media been so unrelentingly determined to destroy a president, and they have not been above literally making up stories to advance that agenda.

Granted, Trump is an easy target. He has the maturity of a petulant child and routinely makes unwarranted and embarrassing attacks on others. And almost everything that comes out of his mouth is an exaggeration or outright falsehood.

All presidents – indeed pretty much all politicians – at least embellish the truth from time to time. Trump is far worse than most, but he is not alone among politicians in having credibility problems.

That’s exactly why it is so important that the news media do its job with honesty and integrity.

We know that every politician has an agenda. The job of the news media is to be the umpire, fair, objective, and without a dog in the race, presenting the facts without embellishment and trusting the reader to form his or her own conclusions, both about the politician’s credibility and about his or her merits as a public official.

It has been a long time since we’ve had any news media who have met that standard – or who have even tried. For decades, every year that has gone by has seen the news media become more and more overtly agenda-driven. They covered Barack Obama and his 2008 presidential campaign in literally messianic terms after having been so hostile to President George W. Bush that the term “Bush Derangement Syndrome” was coined to describe them.

These days Republicans and conservatives consider those to be the “good ol’ days.”

The news media’s coverage of President Donald Trump has been nothing short of antagonistic. They routinely run stories speculating that he’s going to be impeached or resign. They’ve contrived a narrative about collusion with Russia that has not one iota of evidence to support it but that has been the subject of thousands of stories, many of which have been fabricated from whole cloth. They hide every accomplishment and trumpet every rumor in a concerted effort to smear and destroy him.

So it is no wonder that Trump considers them to be the “opposition party.” They are.

But even so, Trump has never threatened their right to print their bile free of government consent or control.

What he has said is that there should be civil damages available to the victims when the news media print stories that are intentionally false and defamatory. In this he is not only right, but he is accurately stating the law dating from pre-colonial England to modern times.

The First Amendment, which the news media use as a fig leaf in defense of their fake news, protects and guarantees free speech, but it has some limitations. As Justice Oliver Wendell Holmes famously wrote, the First Amendment does not permit a person to yell “fire” in a crowded theater. And, likewise, it doesn’t protect defamation.

Defamation is any statement about another person that the person making the statement knows or ought to know is false and that is likely to harm the target’s reputation. The victim of defamation is entitled to seek both compensatory and punitive damages in a court of law.

In 1964, the U.S. Supreme Court ruled in the case of New York Times Co. v. Sullivan that in defamation cases brought by public figures, they must prove not only that the statement was false and damaging to their reputation but also that the person making that statement did so out of “actual malice.”

The Sullivan decision was one of many issued by the Supreme Court under Chief Justice Earl Warren that had no basis in the Constitution. The legal definition of defamation has been part of common law for centuries, and it applied to everyone equally. There is absolutely nothing in the Constitution that made public figures a new and distinct class of defamation victims or that created a new standard of “actual malice.”

The result of Sullivan is that CNN, the New York Times, and everyone else in the news media can print anything they want about any public official, including stuff that they make up and know is false, with impunity as long as no one can prove that they did it with malicious intent. And the bar to prove actual malice is almost impossibly high. That’s why so few public figures win defamation suits.

Ever wonder how the National Enquirer and other supermarket tabloids have stayed in business for so long? It’s because of the Sullivan decision by a left-wing activist Supreme Court in the 1960s.

When Trump says he wants to reform our libel laws, what he’s getting at is eliminating, or at least modifying, the double standard concerning defamation against public figures like him. He believes, correctly in my opinion, that the news media that are entrusted to truthfully report the news should not be protected from being held accountable for civil damages when they intentionally make up untrue stories about him designed to attack and undermine him.

Changing the law regarding defamation of public figures would be a very difficult fight. As a practical matter, there are only two ways such a change could be effected: Either amend the Constitution, or convince the Supreme Court to reverse its Sullivan decision.

It is very unlikely that a constitutional amendment on this subject could ever get passed and ratified. It is also unlikely that a Supreme Court that is usually loathe to upset its own precedents will agree even to review this issue. However, given the conservative make-up of the current court, it is possible that they would do so, and it is therefore the best avenue of attack available to the president.

Regular readers of my columns know that I am no apologist for Donald Trump. When he makes statements such as the one this week using vulgar obscenities to describe people from Haiti and Africa, he turns my stomach and humiliates all of us as Americans.

But Donald Trump, like every other American, has the right to be protected from deliberate falsehoods about him by the news media. When they engage in this kind of despicable conduct, they deserve to be held accountable. To make that happen, our defamation laws must be reformed and once again conformed with the Constitution – just as President Trump is advocating.