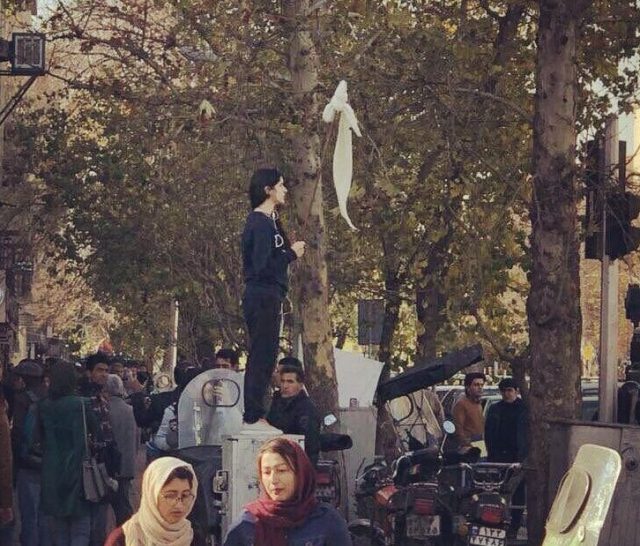 Iranian people yearning to break free from the yolk of a despotic, 11th-century, apocalyptic death cult are in the streets of the major cities of Iran.  Women are removing their burkas, and young, educated, Persians are denouncing their theocratic, radical Islamic government. They do so under penalty of death.  The Iranian protests are a real resistance.

Fake scandals, fake news, false allegations, and the sad, pathetic engineering of a fake political resistance nurtured by hate and given sustenance from the crocodile tears of those who lost a free, fair election, dominate an American media obsession.  The American ‘resistance’ movement is a joke.  It is a mirror into the soul of a country that has lost even a glimpse of the true meaning, price, and value of liberty.

When a young woman pulls her burka off in Iran and waves it defiantly, head held high, with her face and image emblazoned across the globe … she says to those who would kill her and her family … enough.

Protestors in the streets of Iran aren’t giving up a trip to Starbucks.  They are putting their lives at risk.

Iranian protestors are standing against real tyranny in a country with real oppression.  They are standing up in a society that murders gays and throws them off buildings.  They are defiant in the face of a country whose secret police might, and indeed likely will, snatch and grab them … torture them … and kill them.

Protestors in Iran, ironically, aren’t merely showing America and the world what real resistance looks like … they are making small the puny complaints of disappointed, spoiled, American political rabble.

Yes … the decent people of the world will rightfully see these protests as a breath of liberty and expression of freedom in a place where the air of liberty is thin, the light of liberty is dim, and words of liberty scarce.  In America, those who understand what real resistance means, and the value of liberty, can’t help but also see how our Kardashian-sized culture has made small the concept of true liberty.

Even our press … a national disgrace … makes small the true fight for liberty.  As thousands of protestors took to the streets across Iran … risking their lives … CNN, a proprietor of slanted, if not fake news, continued its relentless assault on the President with a story about the US Post Office. There was not one link at that time on CNN’s webpage even referencing the Iranian protests.

CNN … the President says sometimes … is “fake news.”  Perhaps, it is.  I have certainly covered its bias and systematically exposed its agenda.  In the end, however, nothing is more damning to the reputation of biased media than to sit, hands folded, as the brave protest … risking their lives … while a network pretends it isn’t happening or is not news.

The Iranian protests are, however, not about America.  They are about liberty, justice, freedom, and the right of all people to live free from oppression and tyranny.  They are both collective and individual acts of bravery, the essential elements in a recipe for revolution.

Americans used to teach those lessons of liberty.  We used to share this recipe, and we once stood as the shining city on the Hill to which all free souls could aspire.

We are a broken shell of our former selves.  Indecent, uncivil, whiny, self-absorbed, and obsessed with party over country.  Americans now think ‘resistance’ is a night out breaking windows and complaining about the evils of capitalism and the unfairness of free election lost by our team.

The Iranian protestors stand tall, and in comparison, they make the American ‘resistance’ movement look every bit the disgrace we know it to be.  Sadly, those charming Americans in vagina hats, holding signs like “Rape Melania,” and complaining about the “Orange Fuhrer” … they make small everything that was once great about America and the civil society.

Will these protests in Iran be a second Iranian revolution?  Can the people of Iran break free from the death grip of its cultist leaders?  Can this resistance gain enough strength to meet armed evil and topple it?

Will Americans, who cannot unite themselves, at least find a familiarity in the call for liberty, and lend their hand to people yearning to be free?

The politics are delicate.

Make no mistake, one wrong move by our government could help the Iranian clerics who oppress, torture, and murder their people. The Iranians rose up in 2009, provoked by the false promise of Arab spring.  The new President then let those voices be crushed, their leaders be killed, and spring turn to a dark, cold, relentless winter.

Neither our government nor our people can afford that mistake again.

President Trump has publicly supported the protestors, and unlike his predecessor, he is not helping the tyrannical government obtain weapons, nor is he sending them crates of cash to prop them up.  Indeed, Trump’s complete lack of support for the Iranian fanatical clerics has undoubtedly emboldened the protestors and fanned the flames liberty.

Many reports of peaceful protests by Iranian citizens fed up with regime’s corruption & its squandering of the nation’s wealth to fund terrorism abroad. Iranian govt should respect their people’s rights, including right to express themselves. The world is watching! #IranProtests

Americans longing for a real purpose and to embrace liberty once again … now have a real cause.  Let them join a real resistance.  Let the American people stand with the Iranian people, as they show us what real resistance looks like in the face of real tyranny.

In Iran, her people are showing Americans what the fight for liberty looks like.  That’s ironic indeed. It proves that liberty and freedom are birthrights … of all people … and not the creation of government.  In fact, America was the first country to attempt to create a just government to secure the freedoms of a free people.

In America … lady liberty stands in a harbor as a symbol of freedom once won, and the promise and hope for those still yearning to be free.

If you want to use the word ‘resistance’ for your political actions, ask if your resistance might get you and your family killed by the government.  If not, you are a political protestor in a free country … not a resistance warrior.

In Iran, a lady once forced to conceal her face stands waving the rag of her oppression in a fight that has just begun.  She is the real resistance.