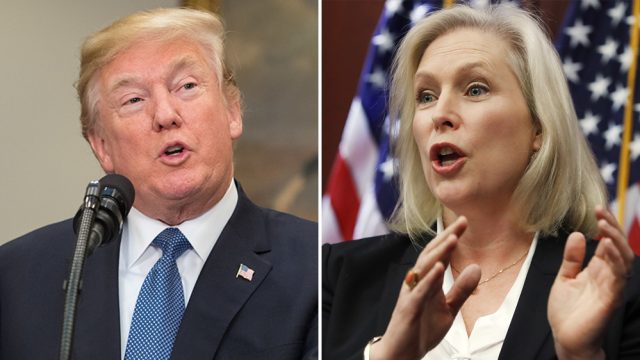 President Trump today issued a tweet in response to Sen. Kirsten Gillibrand’s call yesterday for him to resign over (unsubstantiated) accusations by several women at a George-Soros-funded press conference earlier in the day:

Lightweight Senator Kirsten Gillibrand, a total flunky for Chuck Schumer and someone who would come to my office “begging” for campaign contributions not so long ago (and would do anything for them), is now in the ring fighting against Trump. Very disloyal to Bill & Crooked-USED!

I don’t blame Mr. Trump for being upset about Ms. Gillibrand’s call for his resignation. The American voters knew before the election last year that Trump had a history of, at a minimum, making crude and misogynistic remarks about women and that he had been accused of sexual harassment and assault. The voters factored those allegations into their decisions and chose to elect him anyway.

Yesterday’s press conference provided no new information on these subjects. In fact, the press conference might even have damaged the credibility of some of those accusations by politicizing them, much like Gloria Allred did when she politicized her client’s accusation against Roy Moore.

So, it neither surprises me nor offends me that Trump chose to lash back at Sen. Gillibrand for her ridiculous call for his resignation by his favorite medium, Twitter, and it was fair game for him to point out that in recent years she had solicited campaign contributions from him.

But Trump added that Ms. Gillibrand “would do anything” for contributions from him. He had already made his point about Sen. Gillibrand having turned on him like she turned on her former political sponsors, Bill and Hillary Clinton. So, what did he mean by that phrase?

Trump’s tweet alleged that Sen. Gillibrand had already, in the past, either done unspecified things for contributions or had at least expressed her willingness to do so. That is a serious accusation that requires elaboration.

Was he alleging that Sen. Gillibrand is corrupt and offered to exchange political favors for campaign cash?

Was he alleging that Ms. Gillibrand is a slut who offered to grant sexual favors for campaign cash?

What exactly is it that he alleges Ms. Gillibrand did or offered to do in exchange for campaign cash?

These questions are important because one of two things has to be true: Either Sen. Gillibrand exchanged favors of some kind as a quid pro quo for campaign contributions (or at least offered to do so), which is a felony, or she did not ever do so, in which case Donald Trump defamed her.

One or the other of these high public officials must be held accountable. In order to know which one, it is imperative that Trump tell us precisely what he is accusing Sen. Gillibrand of having done.