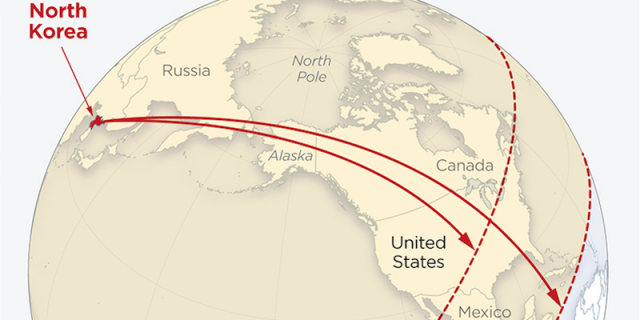 The war with North Korea never ended. We merely stopped fighting. The war is about to start again, and when it does, the world will count its loses in the millions. We have an obligation to ensure those are not American loses.

War with North Korea is no longer a choice, nor is it a matter of last resort.  It is here. It’s been here, we are just ignoring it. Likewise, we are ignoring the many serious questions that the North Korean crisis represents. If, however, we boiled this crisis down to one simple, question, it would be this:

Which allied city or country, or which US city are Americans prepared to sacrifice to say that we didn’t strike first?

The supreme ruler of North Korea is a madman.  Now, he’s a madman with nuclear weapons and a proven missile delivery system capable of hitting all American cities.

Likewise, I have no allusion that the US can or should send hundreds of thousands of troops to a land-war with a lunatic in the Pacific.  A conventional war in North Korea is a loser, with too many dead and too many chances for a nuclear strike by North Korea against one or more targets, including the US.

Do you want to bet a few million US lives on our anti-ballistic missile systems?

War ought not be fought without a declaration, without national unity, and without a commitment to total victory. I outlined all of that in the American War Doctrine. If, however, the President has neither the time nor ability to gain that unity, he still has the responsibility to define victory and to make the case why we must act.

This forces us to consider the first-strike option.

Our first strike can only work if North Korea cannot retaliate.  A retaliation that makes possible a nuclear strike negates the purpose of the first strike.

The Pentagon knows, for certain, that if we strike North Korea, we must destroy her.  A first strike by the US against North Korea is a last strike.

On November 28, 2017, the North Koreans fired another missile test in violation of UN sanctions.  This test showed an ICBM capability much more pronounced than ever before.  The missile splashed down in Japanese territorial waters, but not before traveling dramatically higher and further than previous tests.

The test was important because North Korea has served notice that it can now reach any city in the United States.  In fact, after the last unauthorized test, experts said the trajectory of the test put New York and Florida within range of North Korean missiles.

This latest test was the madman’s way of saying, “just in case you were not sure before, know this, we have your continent covered.”

Kim Jong-Un’s missile test is an invitation to annihilation.

The question then becomes … whose annihilation?

While we are asking serious questions about a rogue lunatic with missiles and nukes, we ought to be asking at least one more.

If North Korea is permitted nuclear weapons and ICBM’s, who is not?  There is no line … not in the sand … not on paper … and not either in longitude or latitude.

If the joint chiefs of staff have a plan to destroy the nuclear and missile capabilities of North Korea, in their entirety, then it is time to act.  I don’t advocate a nuclear strike, but I support using the whatever weapons are necessary to eliminate the threat to us and our allies.

Acting immediately decreases the threat to America.  Waiting, increases the lunatic’s leerage as his weapons gain range and accuracy.  In addition, he can harden defenses and increase stockpiles. In short, delay leads to more death and destruction.

The world has simply had enough.

American weakness has made the world less safe.  Since the Korean conflict in the 1950’s, through the disgrace of Vietnam, and into our present warfighting, the world has seen a super-power without principles, without moral clarity, and without resolve.  That is why bandits, terrorists, and rogue nations test us.

America once told the world that Axis powers not only needed to lose, but they needed to unconditionally surrender.  We accepted only total victory … that remarkable moment when the whole world knows who won, and no one is left spinning a victory.  Total victory is when the enemy surrenders and declares you the winner.

In North Korea, victory will be hard … because America may be forced to destroy entire cities, and indeed, most of the country.  Doing so will take courage.

Failing to do so is the easiest path.

I fear that in our desire to avoid confronting a madman, we will look back one day, at a memorial for the lost city of San Francisco, or Seattle, and ask … why didn’t we act?

The case for a first strike is hard to make.  It should be.  But North Korea is a unique case, and a special, profound threat.

We have an unpopular President who enjoys little support. If President Obama took out North Korea, half of America would claim he saved civilization.  The other half would swear he did so to avoid some hidden scandal.

In the case of Mr. Trump, support would be lower and suspicion would be higher.  This complicates what might be a necessary first-strike.

I read one anti-Trump poster saying tonight that Mr. Trump painted us into a corner and that now, due to Trump’s big mouth, we must do something.

The only questions left for Americans at this point are those already posed.  If you think we can live with a nuclear North Korea capable of ICBM launches, then you do nothing and hope we have not consigned millions of Americans to death.

If you don’t think we can live with a nuclear North Korea, then we must support the American President and his military to use whatever weapons necessary to eliminate the threat.

The country will always have those who say we can never strike first. Even if we could ensure that only such naysayers were subject to the threat of destruction, our obligation is to protect everyone, including the most passionate dissenters.

With each day we wait, the first strike must be bigger and deadlier to stop North Korea. If there is an alternative to striking first, I am happy to hear it.

Waiting and hoping isn’t good enough, not in the era of nuclear weapons.

We have an obligation to end it now … unless nuclear proliferation means nothing, and Americans choose to live at the whim of a lunatic.