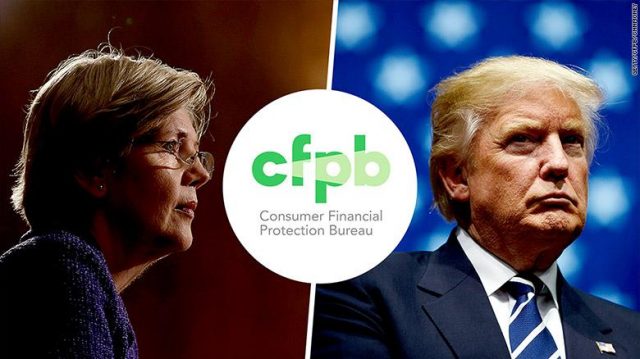 The Consumer Financial Protection Bureau (CFPB) is a creation and darling of the hard left.  It is a big-government, regulatory, sheriff created with extraordinary government powers to attack and regulate financial entities and industries.  Today, there is a war to control it.

Richard Cordray, the former Director of the CFPB resigned to run for political office as a Democrat.  On Monday, November 27, 2017, two people declared themselves the leader of this powerful entity and showed up to work to run it.  One was put there by the President, who heads the administrative state. The other is claiming she has the right to lead it because the guy who resigned his position left her in charge.

This is a classic deep-state power grab, if not an attempted agency coup.

Frankly, it is less of a coup than it is an opportunity for desperate Democrats, on behalf of their resistance fighters and deep-state allies, to create yet another controversy and foment division and dissension as they continue to attempt to hold onto the powers they lost in the 2016 election.

The head of the CFPB is appointed by the President and must be confirmed by the Senate. What this means is that the stunt pulled by the Democrats and their bureaucrat puppet to seize power in the office is just that, a stunt.  Trust me, if the Senate can confirm Gorsuch, they can and will confirm the President’s pick to lead this agency.

Still, at issue today is, who is in charge of the CFPB until that new nominee is named and approved by the Senate. The correct answer as to who is in charge … is the President’s temporary pick, Mick Mulvaney.

The Democratic plant, Leandra English, the former chief of staff of the previous Director is no more the legitimate CFPB head than she is the Queen of England.

The effort of the left to hang onto control to its bureaucratic baby is just a resistance ploy.  It is all about generating more bad publicity and trying to undermine the President.  The entire episode is a classic phony legal dispute engineered without regard to the law or ethics. This is political gamesmanship and delay, with the added benefit of trying to make this President appear lawless.

The law is completely on the side of the President in this controversy.

Circulating on the internet are a series of poorly reasoned, intentionally misleading “legal” opinions that have been put together either by partisans or on behalf of partisans.  The leftist Take Care blog put out the best of the worst. These propaganda tools are intentionally created to deceive and mislead blind followers.

Now that Richard #Cordray has resigned as Director of the #CFPB, the Deputy Director is the Bureau’s acting Director. #Trump may decide he doesn’t care what the law says, but his word won't be final. #Judiciary #CFPB #RuleOfLaw @BrianneGorod https://t.co/aOC66ZRjFl

Really good lawyers know the difference between a plausible argument made for political purposes to the masses, and a real, legal argument based on statutory principles and facts.

Ironically, Senator Elizabeth Warren, the mother of the CFPB, sent out a tweet declaring too that the left-wing, deep-state deputy, Ms. English is the rightful acting deputy of the CFPB based on a specific statute.  It’s ironic because the statute she attached to the tweet proves her wrong.

The Dodd-Frank Act is clear: if there is a @CFPB Director vacancy, the Deputy Director becomes Acting Director. @realDonaldTrump can’t override that. pic.twitter.com/r949ccaJAb

When Richard Cordray, the Director of CFPB resigned, he did not create an “absence,” nor was he “unavailable” as “the Director.”  In fact, the very statutory provision on which the left and Senator Warren rely defeats their dubious “legal” argument.  The terms “absence” and “unavailability” in 12 USC 5491(b)(5)(B) refer to “the Director.”

What director?  He resigned.

When the Director resigned, the agency no longer had a Director as the statute defines the capitalized term.  He wasn’t “absent” or “unavailable.”  He didn’t exist.  His resignation created a “vacancy.”

How do we handle vacancies in executive agencies?  Guess what?  We have a law for that.

Under the Federal Vacancies Reform Act of 1998, “if an officer of an Executive agency, . . . whose appointment to the office is required to be made by the President, by and with the advice and consent of the Senate, . . . resigns,” the president has the authority to appoint a currently serving federal officer who has been confirmed by the Senate as an acting director.

President Trump named the OMB chief, Mick Mulvaney, as the acting deputy.  Mr. Mulvaney was previously approved by the Senate to run OMB.

The Democrats filed a lawsuit on behalf of their “acting deputy,” hoping to find a judge who cannot read the law any better than they or who is willing to read the law through political spectacles.

This entire political, canard was designed to change the news cycle from sexual assault allegations against prominent Democratic Congressmen to a phony controversy that would allow political opponents of the President to smear him instead.

Next thing you know, we will have to suffer the idiocy of that Constitutional conman, Larry Tribe, telling us that Trump has broken the law.  Oh wait, too late:

If Mulvaney, having learned of the emergency motion filed against him and @POTUS tonight, takes it upon himself to literally “occupy” the CFPB Director’s Office before the court can act, that could backfire on the Trumpistas. It would give new meaning to Occupy Wall Street!

Larry Tribe is what happens when you abandon all principles of law for political partisanship.  He’s now nothing more than a Hacktivist masquerading as a legal expert while devaluing the Harvard franchise.  Tribe is another reason to abolish the tenure tax and avoid tribalism.

Mind you, even if this weak, poorly conceived, democratic coup was successful, Trump would still appoint and have approved a new director in a few short months.  The Democrats, who once professed that Mr. Trump deserved “an open mind and an opportunity to lead,” will now do anything to keep their own puppet pulling on the levers of government power more than a year after losing the election.

The law on this dispute is clear … and so are the motives of those who continue to work to divide America.

When I name the deep state as a co-conspirator in the war on Trump, it’s not a conspiracy theory … it’s a modern American reality.

Look for Ms. English to turn up on the faculty of some leftwing University, with a plumb job and the deepest thanks of her hacktivist friends, just like the original hacktivist, Sally Yates.

America just can’t root out the losers of the 2016 election from the federal government agencies they seek to dominate and manipulate. The swamp is deep and dangerous.