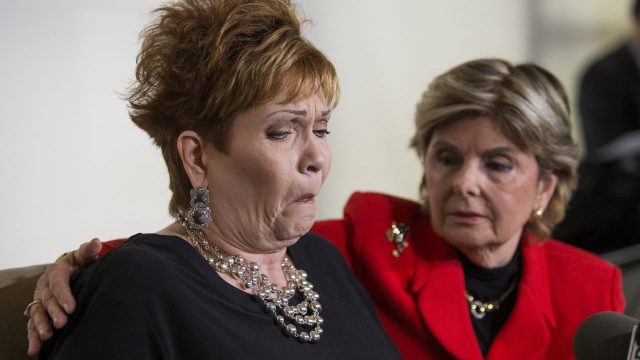 Gloria Allred is a shyster and snake oil saleswoman.  She’s a carnival barker and profiteer.  She’s a publicity hound and unrepentant self-promoter. As a lawyer, Allred is apparently incompetent and unethical.

The primary duty of any lawyer is to represent his or her client zealously and competently. Allred’s client, Beverly Young Nelson, the yearbook totting, Roy Moore accuser, hired a crappy lawyer.

If Ms. Allred did not properly vet these allegations and did not have the yearbook authenticated by real experts prior to using it as a political prop, all Allred has done is open her client up to possible civil and criminal exposure.*

That’s the very definition of incompetence.

In addition, it appears Ms. Allred didn’t check the facts on these Nelson allegations, and she purposely avoided doing so to score political points and to gain publicity. That means she put her interests ahead of those of her client.

No serious, reputable, ethical lawyer would have put his or her client in this position.  To better understand how unethical Ms. Allred’s behavior is, one must ask why it is that she didn’t vet the allegations or have her client’s “yearbook” tested prior to her political presser.

Allred apparently didn’t vet the accusations or authenticate the yearbook because she didn’t want to know the answers.  Specifically, she didn’t want to share a possible charge of fraud if these allegations against Moore are false, and the yearbook is a forgery. The only interest that serves to protect is to shield Ms. Allred from legal liability.

It should not shield her from an investigation.

Allred’s actions demonstrate she is a competent profiteer. They show she is competent in protecting her own legal liability.  In representing this client, she is incompetent, if not deliberately unethical.

Nothing Ms. Allred has done in this matter would be in the interest of a legal client. Her discernable actions have all been, exclusively, in her own interest.

She could not and would not opine on the veracity and authenticity of the Nelson allegations or yearbook. In that interview, she effectively told America that the yearbook could be a forgery and that she wouldn’t and couldn’t vouch for it.

She says she didn’t ask her client if Nelson saw Moore sign the book?  Please!

Can you imagine this woman as your lawyer?  She goes on TV, undermines your credibility, and suggests that the primary evidence waived before a national audience may not be authentic.  In such a scenario, whose interest could that possibly serve?

Allred has set her client up for legal liability, while Allred alone has absorbed all the media coverage and attention that serve only her interests.

Good lawyers recognize that Allred is an embarrassment to the profession.

Her publicity stunt is aimed at gaining free advertising and national attention to win additional future, paying clients who do not understand that Allred serves her own interests ahead of client’s.

I have been very vocal and objective about my view on the original sexual assault allegations against both Moore and Franken.  Likewise, I have been highly critical of the politicization of these sexual assault cases, as well as the frustrating reality that nonlawyers have really distorted the facts and law in the Moore matter.

As a Lawyer, Allred’s conduct is the most infuriating.

She has betrayed her client’s interest, exposed the client to liability, and purposely shielded herself from the facts of the case, all so that she can profit, irrespective of the interests of her client.

It’s despicable, and any competent jurisdiction where she is barred would investigate her conduct in this case.

If your liberty or financial future is at stake, hire a real lawyer. Your country is filled with terrific, hard-working, ethical lawyers too busy working for clients to appear on TV for pure self-promotion.

If you just want to hire someone to get some press for themselves, and possibly leave you facing criminal charges or civil liability, call Ms. Allred … assuming she isn’t soon disbarred.

*I am not opining on the veracity of Nelson’s allegation or whether the yearbook is authentic or a forgery.  I have read the internet sleuthing. The way a competent lawyer would authenticate the yearbook is to have real experts authenticate it before introducing it as damning evidence to support a 40-year-old allegation.  Absent that, lawyers authenticate documentary evidence through an adversarial proceeding where it is examined by experts, and those experts are questioned under oath by lawyers. Only then can we be sure as to the authenticity of disputed evidence. The rest is layperson speculation, all set off by the bumbling, unethical, incompetent Ms. Allred.