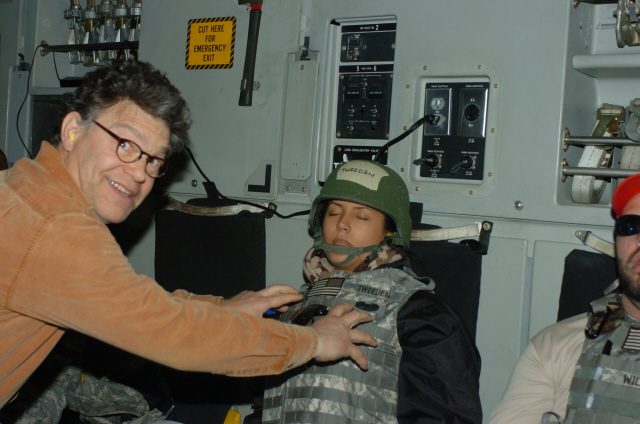 Al Franken is a worse creep than you think.

Women should fear this type of man.  Men … real men … they must rebuke him. Franken is the worst caricature of “manhood” out there.  It is because of Franken that our daughters, sisters, wives, and loved ones fear some men and are forced to fight them off.

If you think the Franken factor is just that stupid, prankish-looking picture of him groping a sleeping woman, you are missing the real story. It’s ugly.  It’s a story of power, intimidation, and ultimately sexual assault.

Up yours Al Franken, you wimpy, pathetic bully.

In 2006, Franken went on a USO tour to entertain the troops.  The photo of him groping a sleeping, young actress is now world famous. Franken then 56 years-old and contemplating his run for Senate, spotted a very attractive 33-year-old, relatively unknown actress named Leeann Tweeden.  He didn’t just spot her, he identified her as prey.

Franken should resign because of the Franken factor, that deviant personality trait that makes insecure, weak men like him dangerous to women.

Franken found an attractive woman, and he set out to get from her that which she didn’t want to give the creepy old bastard.

Make no mistake, a 56-year-old man has every right to pursue, woe, charm, and try to win the affections of a 33-year-old lady. When he can’t do it, he has no right to take what is not offered through power, intimidation and physical force resulting in sexual assault.

No man has that right.

Indeed, with great power … including wealth, fame, privilege, and prestige … comes great responsibility.  With the physical strength and power of a man comes too an awesome obligation to those weaker than him.  Real men … gentlemen … great men … they know this.

Al Franken saw his power as a means to force a young actress to give him a sexual thrill, even though she made plain she wanted no part of it.

A man who would use his position and power to coerce and assault a woman to steal from her that which she doesn’t want to give is human garbage.*

Here is Ms. Tweeden’s recollection of rehearsing for a skit with Franken, after Franken set it up so they would have to kiss in the skit, and then creepily worked to force her to rehearse the kiss:

He continued to insist, and I was beginning to get uncomfortable.

He repeated that actors really need to rehearse everything and that we must practice the kiss. I said ‘okay’ so he would stop badgering me.

We did the line leading up to the kiss and then he came at me, put his hand on the back of my head, mashed his lips against mine and aggressively stuck his tongue in my mouth.

I immediately pushed him away with both of my hands against his chest and told him if he ever did that to me again I wouldn’t be so nice about it the next time.

I walked away. All I could think about was getting to a bathroom as fast as possible to rinse the taste of him out of my mouth.

I felt disgusted and violated.

Hey Senator Franken … just keep repeating that line. The young woman you tried to intimidate and forcibly assault said she felt “disgusted and violated” by you. That’s because you are a lecherous bottom-feeder.

That famous picture Franken had someone take of him groping Tweeden as she slept happened AFTER the sexual assault.  Franken did what most rejected losers do. He tried to humiliate and embarrass his victim to soothe his own insecurities.  He’s despicable.

This Franken conduct is exactly what has put women at odds with men.

Franken and his ilk have no code of human decency. They prey on women and objectify them. They then assume it is their privilege and right to please themselves as they deem fit.  When these less powerful women don’t submit, these “big men” force themselves on these women using those tools of power, intimidation, and force.

These are not “mistakes” for which predators like Franken can apologize.  This is who men like him are.  Already, a second woman is emerging to make accusations against him.

Hey, weird Al … I love beautiful women too. I remember my first crush, my first kiss, and the first girl I was certain I loved.  I remember all the interactions with those women, from the awkward, to the sweet, and to the passionate.

It never once occurred to this man to try to take by force the affection or physical pleasure of a woman. In fact, what man would want to do that?  The magic and chemistry of lust, love, and intimacy are made magical by the mutual desire that is not merely consent … but affirmative assent.

Maybe Al Franken doesn’t have any idea what it is like to read in the eyes of a sweet woman the eager longing to create with him some meaningful moment.  If he wasn’t a piece of crap, I’d feel sorry for him.

I have run a sub-six-minute mile, bench-pressed over 450 pounds, taught law, won trials, appeared on radio and TV.  I was, and still am, no doubt about it, way better looking than Al Franken.  None of that makes me more of a man than him.

What makes real men is our desire to treat women with the respect, admiration, and decency they deserve, irrespective of whatever desires we have or power we imagine unto ourselves. That’s what makes me and many other decent people more of a man than Al Franken will ever be.

We don’t have the Franken factor … we have morals, decency, and an understanding that women have the right to be free of fear, intimidation, and assault.  In fact, we have a duty to ensure that they don’t live under those threats.

I don’t give one damn what political party Franken, Moore, Weinstein, Clinton, or any other predator is in … this conservative, red-blooded, woman-loving, man is just sorry these “men” are giving our gender a bad name.

*A former colleague of mine unfriended me from Facebook somewhat surprisingly.  It turns out, her liberal sensibilities were offended by my use of the term “human garbage” to describe the outrageous behavior of Leanna Dunham. Sadly, the world is filled with people who are nothing but the functional equivalent of human garbage.  Though, honestly, the festering stench of rotten garbage does not achieve its foulness through a series of choices like humans.  So, perhaps I am being unfair to garbage.  Make no mistake, society does not crumble because we make moral judgments about reprehensible conduct, it crumbles when we fail to do so.