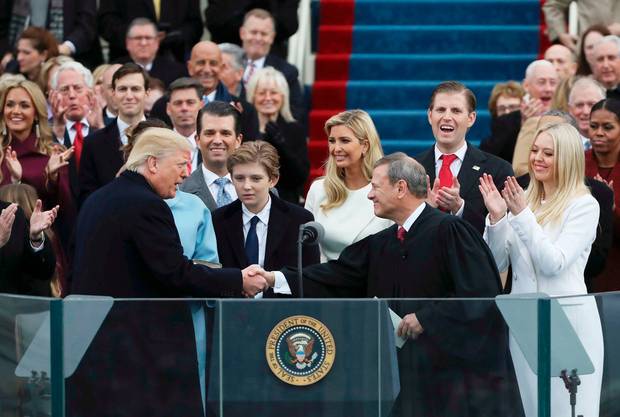 I am 43 years old. Some of my liberal friends in the resistance here in Arlington County Virginia say there is no President Trump.  Bill says, “If you see it on Committed Conservative, it’s so.”  Please tell me the truth, is there a really a President Trump?

Virginia, your little angry friends are wrong. They have been affected by the cynicism of a cynical, political movement. They do not believe except what they want. They think that nothing can be which is not comprehensible by to their radical, leftist minds. All progressive minds, Virginia, whether they be AntiFa or NOW, or BLM are little. In this great universe of ours, progressives and the resistance are mere insects, ants, in their collective intellect as compared with the boundless world intellect of those whose heads are out of the sand, as measured by the intelligence capable of grasping the whole of truth and knowledge, rather thana mere slice of partisan hackery.

Yes, Virginia, there is a President Trump  … even after the 2017 Virginia election.

President Trump exists as certainly as the electoral college, the Second Amendment, immigration law, and the Constitution exist, and you know those pieces of real America abound and give to your life its highest liberty. Alas!  How dreary would be the world if there were no President Trump! It would be more damn dreary if there were nothing but Virginias. With no President Trump would be no childlike faith then, no reality TV, no late-night tweets or Justice Gorsuch to make tolerable this political existence.

We should have no enjoyment, except in seizing and redistributing other people’s stuff, if there were no President Trump. The external light from which free people spy the promise of liberty would be extinguished.

The most real things in the world are those that neither liberals nor progressives can see?  Did you ever see jobs created by supply-side economics? Of course not, but that’s no proof that they are not there. Nobody can conceive or imagine all the wonders of conservatism there are unseen and unseeable in the world.

You tear apart Executive Orders to find evil intent lurking in them, but there is a veil covering the unseen world of reality which not the most urbane, educated progressive, nor even the united strength of all the socialist that ever lived could tear apart. Only love of country, our freedom, and our civil society can push aside that curtain and view and picture the supernal beauty and glory that is a President Trump.

Is it all real? Did Hillary actually lose?

Ah, Virginia, in all this world there is nothing else more real and abiding than the Trump Presidency.

Thank sane Americans and the electoral college.  Trump is your President and will have been so forever.  A thousand years from now, Virginia, nay 10 times 10,000 years from now, President Trump will make glad the hearts of the 69,866,060 people who voted for someone other than Hillary to be President.

Yes, Virginia … even after the 2017 Virginia elections, President Trump is your President.

In the style of “Is There a Santa Claus?” reprinted from the September 21, 1897, number of The New York Sun.