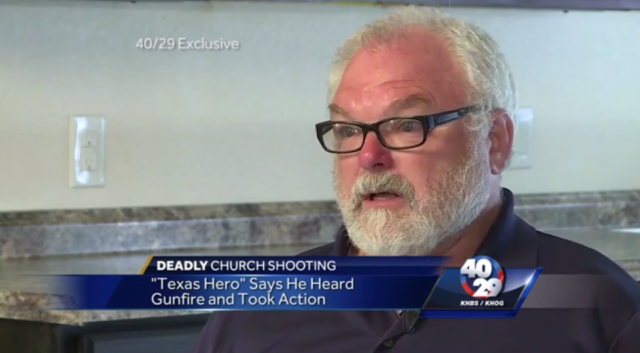 Twenty-six Americans were murdered in a small Texas Church by a crazed killer. Minutes later, recriminations rang out blaming the NRA, Republicans, law-abiding gun owners, the gun, and the Second Amendment, and of course, white people.  We now know that a former NRA instructor, a private citizen with no military training, no police background, and nothing more than his rifle and his bare feet, helped to end the carnage by shooting the gunman.

We also know that the convicted criminal who committed this heinous crime lied about his background to buy guns and that the Federal Government that convicted him and tossed him out of the military failed to alert authorities that he was prohibited from buying a weapon.

The Texas massacre is a dreadful tragedy … made worse by dreadful left-wing kooks devoid of decency or even the basic facts.

The Texas massacre is a repudiation of the false narrative immediately put out by angry, emotionally over-wrought, politically motivated left-wing haters. Yes, this was all the fault of the Republicans tweeted one fruit cup.

Innocent people go to church on Sunday to honor their God, and while doing so, get shot in killed. What country? America. Why? Republicans.

Wait, it’s all the fault of the NRA.

The @NRA is soaked and bathed in blood. How do its adherents sleep at night?

Above is Joy Reid.  She’s a race provocateur and an altleft talking head for MSNBC. She lies awake at night thinking about how white people get a pass for everything and minorities live under the boot of white racists.  Reading her twitter feed is an exercise of patience and sympathy for the educated and empathetic among us. Ms. Reid couldn’t wait to retweet a racist, race-agitator while the victims were still slumped over in the Church.

Nothing to see here, folks… https://t.co/d6tt6JLvMm

Here’s the racist genius “Shaun Kings” tweet she felt compelled to pass along.

It was a white man who slaughtered half of the church in Texas.

That means everything is just fine.

Sadly, it’s all race to the racists.

When they figure out how to spin the violence against people of color, immigrants or “Antifa” to sell more guns. #bloodontheirhands https://t.co/5vHClskwSd

At least Ms. Reid wasn’t engaging in any hysteria that attempts to convert the shooting into part of a larger, darker, (or whiter) political movement in the country.

We are facing nascent fascism, the threat of autocracy and authoritarianism, resurgent neo-Nazism, mass shootings and political violence…

Ms. Reid is that dangerous combination of stupidity and maliciousness. I read nearly six days worth of her twitter feed hoping it would show that her poor judgment in tweeting was born of mere ignorance, rather than part of a sick soul raised on an ideology of racial animus. But, her personal tweets and re-tweets are better proof of a malicious anger lurking below her abject ignorance. Not surprisingly, the uninformed are often angry because they are, in fact, uninformed.

When Ms. Reid runs out of her own anger, she instead retweets more leftist tripe.

Then Ms. Reid re-tweeted this mental midget.  He couldn’t wait to blame the NRA and take a swipe at all Texans.  Turns out, a law-abiding Texan with a gun did stop the massacre.  Though, no amount of thoughtfulness could have stopped this radical goon uninterested in facts.

Q for @NRA: Why wasn't a law abiding, CIVILIAN gun owner in the most "armed" pro-gun state in the union, Texas, able to stop the shooter? ? https://t.co/SnWJ15z6jV

Ms. Reid, a renowned expert in nothing, thinks she is a Constitutional expert on “founding intent,” apparently.  In her mind, the founders never intended “this.”

I'm pretty sure this is not what the founders had in mind. https://t.co/2aOrgJnmgH

I could pick on Ms. Reid all day. Her life resides at the intersect of hate, ignorance and racial animus. If white cable network employees said of black people the types of things Ms. Reid says so casually of white people, the Republicans, or the NRA, they would be fired and black-balled.  Ms. Reid’s lack of judgment, anger, discord, rejection of fact, and plain ignorance proves she was not hired on merit. Her disgraceful conduct and hate prove she can’t be fired because of her privilege.

Honestly, I am happy to have Ms. Reid as a resource.  It’s the same reason I listen to Urban Radio and the “Black Eagle.”  I really want to know what it is that radicals and racists are saying and how they are twisting and distorting facts.  Ms. Reid lays it all out there.  In her mind, the victims are all dead because of a crazed white guy with a gun, gifted from the GOP and the NRA, took them out.

In her mind, resides neither truth nor logic.

When she tweets that the founders never intended “this,” she proves she has it completely wrong. She is right that the founders never intended for criminals who abuse children to run free on our streets, that’s true.  In the time of the founding, a man who beat his wife and cracked the skull of an infant child might have hung. In the military, he might have faced a firing squad.  It certainly isn’t the fault of conservatives that we don’t do that anymore.

Of course, Ms. Reid’s “this” was about people being gunned down in church as they prayed.  No, the founders never intended that either.  That is why they gave Americans, in the Bill of Rights, the individual right to protect themselves, their families, and their friends.

Ms. Reid and her dangerous ilk think all of your needs, wants, and safety are the mandate of a benevolent government. That is exactly what the founders never intended, Ms. Reid. Read a book.

The truth is, the system of government protection into which altleft radicals like her would like to put America failed in this case.  The “gun control” in place didn’t work because the Federal Government didn’t do its job.

The NRA doesn’t have blood on its hands, Ms. Reid. It was the hero in this story.  One of its former instructors spilled the blood of the murderer.  Without a law-abiding, gun-owning, AR-15 wielding, non-military, non-police-officer, this onslaught would have continued and more people would have died.

Read this … and repeat it:

When the government failed, an American citizen stepped up and responded.  Thank God almighty and the founders for the Second Amendment.

Here is what the joyless Ms. Reid and her merry band of American bashers never understood. This is exactly what the founders intended. They certainly didn’t intend for some national, all knowing, all seeing, all-intrusive force of gun-wielding, dragoons to “secure our liberty.”  Likewise, they didn’t create the Second Amendment to create a militia, as some Google JD holders think.  The Constitution already established the armed forces and a commander-in-chief.  The Second Amendment is a personal right and a responsibility of the free citizen to protect himself as needed, from his neighbor or his government.

The massacre in Texas has many roots, and ironically, none of them are tied to republican, conservative, or NRA principles of freedom, accountability, and personal responsibility.

Here is the massacre in a nutshell.

An atheist, spousal-abusing, child-beating, ex-con, attacked a church fall of Christians as a continuing part of his domestic violence.  He was free to do so because we don’t punish people like we used to do.  The government set up a gun control law to stop him from getting guns, and surprise, the government failed.

After killing all those people, he was engaged by a private citizen who grabbed his legal gun and ran, barefooted, to the sound of gunfire.  That citizen shot him twice, and then chased him in a high-speed chase until the gunman crashed.  The gunman either died from his wounds, or he shot himself. In either event, a hero emerged and did exactly what the founders imagined when they agreed that a free people are free when they are allowed to protect themselves.

The victims are the tragic result of failed government gun control that permitted a sick, evil, violent ex-con to illegally buy a gun and murder them.

The truth is much different than the painful lies and false narrative spread by bigoted haters like Ms. Reid. An NRA member, former instructor, and regular American was the hero in this tragedy.

That is exactly how our system of freedom was designed.