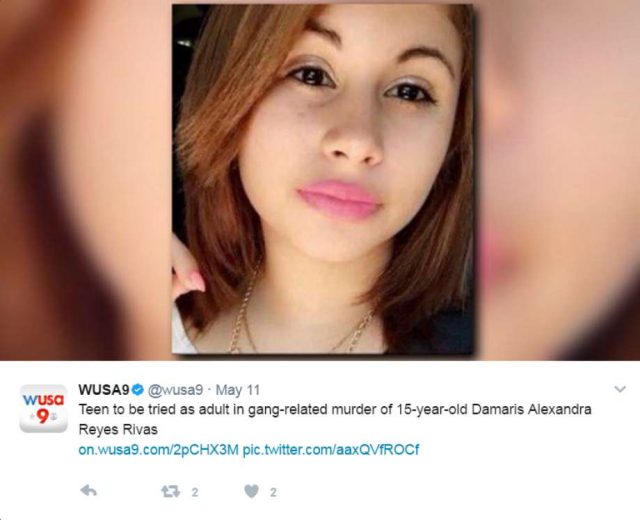 Ralph Northam is a terrible candidate.  So bad is the Democratic candidate for Governor of Virginia that the Washington Post decided to leap into action to try to save him.  Northam is trying to lose an unlosable race for Governor in Virginia.  It turns out Ed Gillespie’s charge against him for being soft on MS-13 is doing the job regular political ads won’t do. In fact, the accurate allegation is hurting Northam in democrat-rich northern Virginia, where wealthy suburban kids share their streets with MS-13 gang members in numbers that will shock you.

The Post’s “fact-checker” set out this morning to prove that Ed Gillespie was lying and exaggerating about the MS-13 threat.  Specifically, he wanted to show Gillespie was wrong in an interview about the number of alleged MS-13 gang members in Fairfax County. The biased, hit-piece exploded in the paper’s face when instead, the author proved that MS-13 is a unique danger to Virginians … and in particular to those in the wealthy, heavily democratic Northern DC suburbs.

Here’s a fact you don’t need to check: the Washington Post doesn’t want this race to be close.  Glenn Kessler, the Pinocchio king of the Post, assigned two Pinocchio’s to Gillespie’s assertion that there are 2000 MS-13 Gang members in Fairfax County, Virginia.  Kessler’s piece downplayed the MS-13 threat. He went to great lengths to note the total population of Fairfax.  And, even though Kessler found a credible, law enforcement official who backed Gillespie’s gang number estimate, Kessler was unimpressed.

The Executive Director of an anti-gang task force said Gillespie’s number was “pretty accurate.”  Kessler dismissed the former police chief and decided conflicting numbers from other sources called the Gillespie claim into question.  Moreover, he tweeted all day that in a county so big, the threat was really small as a percentage.  Fairfax has nearly 1.35 million residents.

Then … Kessler broke an update.  He let the world know that he confirmed with the Fairfax County Police that there are only 1,400 MS-13 gang members in Fairfax.

Here’s the rub, in declaring “victory” about being right, Mr. Kessler missed the bigger point.  His “fact-checking” proved there is 10,000 MS-13 gang members in the entire United States.  Yet, in one suburban county in Virginia there are 1,400.  The Post thinks this is good news.  Mostly, it just wanted Gillespie to be wrong so badly, it never considered the implication of its fact verification.

Virginia, and in particular Northern Virginia, has a massive problem with MS-13 gangs.  If there are only 10,000 MS-13 gang members nationally, then that means taking out the “confirmed” Fairfax County number of gang-bangers, there is only 8,600 MS-13 gang members spread out across the entire rest of the country.

Celebrate my fellow Virginians, Ed Gillespie was wrong.  Fairfax County residents are only 39.5 times more likely to run into an MS-13 gang member than the rest of the country.

To the Washington Post, the issue wasn’t about the massive MS-13 problem, it was about proving Gillespie wrong on a precise number.  The reality is, Gillespie is right.  Virginia, with sanctuary counties in the North, and a massive population of illegal aliens, is knowingly accepting the unfortunate by-product of illegal immigration.  That by-product is additional gang activity.  That’s no surprise.  Counties like Arlington are a home base to one of the largest communities of El Salvadorians, a region from where MS-13 originates.

As I wrote previously, when Northam voted against a bill to let Virginia localities work closely with Federal immigration officials, he bet that the democratic voters of Virginia would put their political sympathies for open borders ahead of their own security. Some surely will, but many moderates, independents, and conservative democrats in these counties are rightfully concerned about one county being the epicenter of MS-13 gang activity nationally.  They should be concerned.

Personal security and personal finance are the two main motivators of most voters.

Fairfax County, Arlington, Alexandria, Prince William, and Loudoun are some of the wealthiest counties in America, with Loudoun number one and Fairfax number three.  A busy tech corridor and a hungry federal government help secure the personal finances of many in Northern Virginia.  But these are not cities.  These are wealthy suburbs, and Virginians want no part of extreme gang violence mixing with the kids Virginia voters are raising in these otherwise idyllic communities.

While Northam is carrying water for his national party on open borders, and the Washington Post is assigning dubious cartoon Pinocchio’s, Virginians of every political stripe want MS-13 out of their communities. Northam and the Post have not fooled these voters. Having an MS-13 gang threat in a wealthy county that is nearly 40 times the threat of the rest of the country is unacceptable.

It is remarkable to think that one in every 993 people in the third wealthiest county in the country is an MS-13 gang-banger.   The Post thinks that’s ok.  Northam thinks it will win him votes.  Gillespie had the courage to raise the issue, and he found out that Virginians too think this is a problem.

Northam might have won this race by 10 points based on my analysis, but once again it is Gillespie connecting with the concerns of Virginia voters.  Will it be enough in a year where structural and national political realities work against him?  We will see.

Right now, Northam, a candidate who seemingly can’t pronounce his own name, is fading faster than a tan in October.

They say all politics is local.  The MS-13 threat is a local problem in Virginia.  It is a huge problem in the biggest county, from where 1 in 7 Virginians cast their vote.  Of those voters, Democrats count on 65% of the vote to offset nearly all of Southern Virginia.

This year, as Fairfax voters head to the polls, they will know that every 994th person they see is an MS-13 gang member.  They are going to wonder just why Ralph Northam and the Washington Post think that’s ok.

This piece has found some typical responses among groups of individuals who steadfastly refuse to read the work or think about it.  Too many see a title, or the source name, and draw conclusions. It’s painful to watch Americans comment on items they have not even read, let alone thought about.  That is, however, where we are in society.

The issue here is not about fear-mongering or as some have wrongly suggested of Gillespie and of my piece, that it is anti-Hispanic or anti-immigrant.  No, it is anti-MS-13. How are we not collectively all opposed to that?

The more precise issue raised by Gillespie is that his opponent opposed and voted against a bill designed to have local law enforcement assist Federal Immigration officials with criminal aliens arrested or held in the local jurisdiction.  That is a bill designed to combat this types of gangs.

One poster actually wrote, in a so-called “conservative” group, that he “lives in Fairfax County and never heard of MS-13 until Gillespie starting running ads.”  I sure am happy that this guy is insulated from the problem, I suppose.  And, I hope he stays safe.  However, it is not credible that anyone living or working in Northern Virginia has never heard of MS-13. The cover picture on this story is of a young woman tortured and murdered in Fairfax by MS-13 suspects. It was national news.

With respect to the Governor’s race, how a Governor chooses to lead and address the safety and security of his state is a primary concern in every state and commonwealth.  Gillespie recognized that, and he drew attention to a problem that simply can’t be white-washed. Northern Virginia, a mecca or wealth and suburbia, is the epicenter of MS-13 gang activity.  (Mind you, these are suburban and ex-urban counties, not cities).

If this is not a legitimate issue in public policy and hence a political campaign, then none exist.