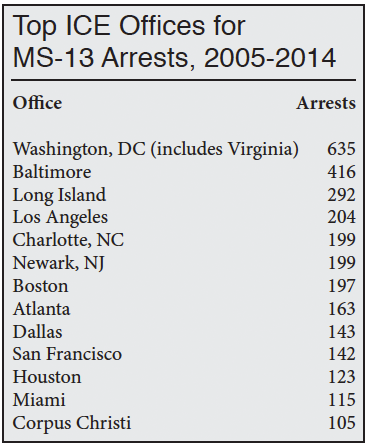 Virginia Republican gubernatorial candidate Ed Gillespie’s recent ad campaign tying his Democratic opponent Ralph Northam to MS-13 gang activity has drawn scorn from the political left. Gillespie’s MS-13 gamble was necessary politically, and the ad is both a necessary and welcome dose of reality, even if some Virginians reject the truth.

Lt. Governor Ralph Northam cast the deciding vote to oppose a bill aimed at requiring Virginia cities, towns, and counties to cooperate with federal authorities on immigration enforcement.  It’s true that the GOP created the vote as political stagecraft to see how Northam would vote.  Northam, however, was proud to cast the deciding vote to stop local law enforcement from cooperating with federal officials on illegal immigration.  He did so to support his party’s strategy of helping, encouraging, supporting, and protecting illegal aliens in the Commonwealth of Virginia.

On that gamble, I fear he is dead wrong.

MS-13 gang presence, recruitment, and violence are a direct and proximate result of growing illegal alien populations that mix in communities where illegal aliens, their offspring, and legal relatives dominate the population.  The problems with MS-13 didn’t spring from the ground.  They crawled in under cover of darkness, illegally, and they are a byproduct of the massive illegal immigration pushed on America by corporations on the right and democrats on the left.

The Democratic Party has made a strategic, political decision that supporting illegal immigration and open-borders’ policies are the best way to expand its base.  It is part of that Party’s obsession with identity politics.  Northam knows that.

The problem Gillespie has is that when he says Northam is soft on MS-13, he thinks all Virginians understand that when a state or party promotes, supports, and encourages illegal aliens to enter and stay in the state, they do so knowing that MS-13 growth and criminality is an off-shoot of that decision.

Liberal and progressive activists in Virginia either don’t care about that reality, or they reject its mathematical and historical basis.  Likewise, while many in the Commonwealth do understand the effects of illegal immigration and are gravely concerned about gang violence, for some those considerations are outweighed by politics.

The “resistance” is strong in the Commonwealth, and in densely populated Northern Virginia, the heartbeat of anti-Trumpism pulses like a hummingbird.  This causes even normal democrats and moderate independents to ignore the reality of MS-13 if doing so will punish the candidate of the party of Trump.

For some anti-Trumpers in the hard-left of deep blue Northern Virginia, Northam could be flying an ISIS flag as long as he is waving it at the party of Trump.  That’s how dysfunctional our political system is, and that is how radical parts of the Commonwealth have become.

I like Gillespie.  I like that he went after Northam on MS-13, and I think he is right to do so.  I also think he understands the political realities of a race steeply stacked against him require him to come out of his comfort zone.  His full-frontal assault on MS-13 is also an appeal to the wayward Corey Stewart base. This is a political race, and politics are always at play on both sides.

On the merits of the charge, however, Gillespie is right.  Weak enforcement and a deliberate effort to stop our local police from cooperating with federal officials encourages illegal immigration, which feeds the strength of MS-13.

The left likes to allege as fact that the GOP is killing people because it won’t expand Medicare or its members want to eliminate Obamacare.  Yet, they reject the sound truth that Democratic support for illegal immigration and sanctuary counties and cities directly feeds illegal MS-13 gang activity.  Indeed, the latter proposition is far more provable than the former.

MS-13 gang activity links directly to cities and counties in the Commonwealth where illegal aliens gather, and where they live under the protection of Democratic politicians.  This is particularly true in communities in the Metro-area of DC.  The DC metropolitan area is the only major metropolitan area where Salvadorian immigrants make up the majority of the Hispanic population.

MS-13 finds its roots in Central America, and in particular El Salvador.

Formerly known as Arlandria, a neighborhood between Alexandria and Arlington in Virginia is now referred to as Chirilagua, due to the many Salvadorans living there from that particular town.  Not surprisingly, MS-13 gang activity, as depicted in the picture graphic is red hot in the DC Metro area.  Adding to that reality, Maryland is a sanctuary state, and Arlington County, Virginia is a sanctuary county.

This is not a complicated issue.  When we import, protect, and give sanctuary to illegal aliens, we get whatever benefits we wanted … cheap labor or votes … and we get all the burdens we don’t really want, which includes crime and gang activity.

There’s the rub … really.  Northam supporters say it is absurd to suggest that Northam wants to help or support MS-13.

There’s a solution to the allegation, Mr. Northam: Stop taking actions that support and help MS-13.

Northam knows this.  Gillespie knows this.  Most sentient Virginians know this.  Yet, there is a huge outcry and push back against Gillespie for stating the truth.  The truth is, those who encourage illegal immigration do so knowing that MS-13 gang activity comes with it.

How many MS-13 crimes are Democrats prepared to accept to ensure that they beat Gillespie and make an anti-Trump statement?  How many murders are acceptable?  To secure some votes, how many kids in Virginia cities and suburbs will democrats allow to be harassed, bullied, robbed, and intimidated by MS-13 or initiated into that brutal gang?

Show me the picture of the Virginian we are willing to let die to protect illegal immigration.

Gillespie is nice guy … he’s too nice to ask that obvious question so harshly.  More importantly, Democratic Party leaders know the complete explanation about their complicity in feeding gang activity doesn’t fit well on a bumper-sticker. So, the Democratic Party supports Democrats who help MS-13, and then they try to convince us that all illegal aliens are noble souls and that the evil, wicked enemy of this country is the President.

Whatever the President’s failings are, and this conservative has cataloged many, supporting illegal alien activity that helps to grow MS-13 gangs is not one of them.

What they don’t say is that getting more MS-13 crime and gang activity is an acceptable by-product of a strategy to defeat evil republicans and the horrific Donald Trump. It is axiomatic that most illegal immigrants are not gang members or violent criminals, and I am sure the pushback on this piece will claim I have suggested that to be true. No … I have not.  I have made clear that with illegal immigration, comes this unfortunate reality.

Gillespie’s ad got pushback, and that is no surprise.  No one wants to talk about the truth.  Somehow, we are made to believe that Gillespie is the bad guy here, or that because the GOP flushed Northam out with a staged vote, the GOP are the bad guys.

No.  MS-13 members are the bad guys, and anyone who helps them gain ground, get sanctuary, or recruit and retain members … those are some bad hombres.

In this case, that includes Mr. Northam.  Virginia has a biennial of over 100 billion dollars, but Mr. Northam would have you believe that it is too costly for local police to cooperate with Federal authorities to apprehend and hold the worst illegal alien criminals.

The bill, of course, ultimately did pass.  The GOP did run a political game on Mr. Northam.  One of its Senate members who clearly supported the bill didn’t vote for it to force Northam to take a position.  Northam, with the spotlight on him, elected to stand with criminality.  He elected to accept both illegal aliens and the natural result of additional MS-13 gang activity.

He would not stand for or with Virginians and legal immigrants.

Governor McAuliffe then vetoed the bill, and the Democratic party claimed victory by ensuring that local police and sheriffs’ officers would not be able to help federal authorities combat the worst illegal alien criminals in the Commonwealth.  Yippee … what a win.

Critics of Gillespie are right about one thing, the entire sorry episode is nothing but politics at its worst.  It’s just their criticism is misdirected.  When elected representatives of any party choose illegal aliens and criminal activity over the safety, security, and interest of their legal residents, they should all be thrown out of office.

At a minimum, Mr. Northam has not earned a promotion to Governor of the Commonwealth.

Protecting American citizens from criminal aliens isn’t a child’s game, nor is it brain surgery Mr. Northam.  It’s a shame you refuse to do the job that American elected officials are sworn to do.

For Virginians, Mr. Gillespie is betting that the voters of the Commonwealth understand the need to stand against illegal immigration and the burdens of MS-13 gang activity it brings.

Mr. Northam is betting that Democrats care more about winning this election and sticking it to Trump than they do about safe communities.

When America is great … we stand together as Americans for our fellow Americans.  We ought not to gamble with the lives of our citizens.  In this high-stakes political poker game, we should go all in on America’s team.