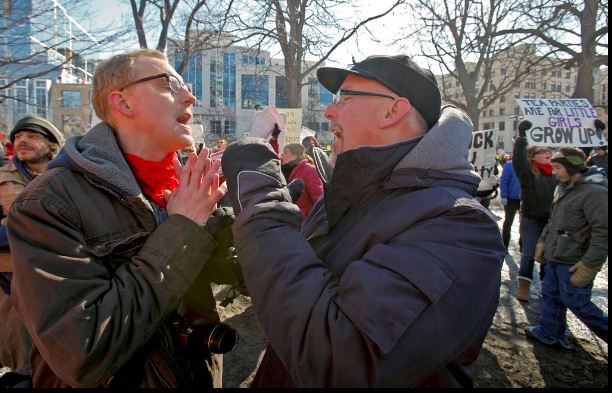 Have you noticed that no one disagrees anymore?

To disagree implies that you respect the other person’s opinion but that you have a contrary view.

The Internet and social media have made it possible for everyone to live inside their own personal safe space where they never have to listen to other points of view. The Internet provides thousands of places to get information, allowing each person to get their information from sources that reinforce their already existing views. And social media enables us to be in regular contact with scores of “friends” who share and reinforce those views even more.

When people are exposed only to information and ideas that reinforce their own views and are not exposed to other information and points of view, we become convinced that our views are the only ones that make sense. And we come to believe that anyone who has a different view either is stupid and ignorant or has a malicious agenda.

So, we don’t disagree anymore. We don’t listen and consider other points of view. We get angry, we confront, and we attack.

And it’s so easy to do that these days because most of our discourse is on-line where we never have to look the other person in the eye. Ever wonder why people do rude things while driving that they would never do anywhere else? That’s the reason. But now everyone on social media is that irritated rush-hour driver who never has to look the other guy in the eye.

So, when we know we’re right and that everyone else is wrong and a danger to our country and society, what do we do? We close ranks. We become xenophobic and elect xenophobic demagogues to high office. And we cheer them on when they express the anger that we’re feeling.

And so, we can’t get anything done to improve the country because that would require working cooperatively with people that we now know don’t just have a different point of view but who are evil and out to destroy the country and everything we hold dear.

But, really, who cares if we get anything done? What really matters is that we’ve got our high-profile champions out there projecting our anger and getting in the jabs and punches that we wish we could deliver ourselves!

It’s no longer about governing. It’s about taking out the bad guys – and everyone who’s not with us is agin’ us.

And our American ranks are not just divided by politics. We are now at a perilous racial impasse.

Most black people are frustrated and angry that they still face unfair and unjust obstacles and difficulties that white people never have to deal with, so many black people have become jaded and have concluded that law enforcement is targeting them and that the majority of white people bear them malice.

People of different races used to discuss our differences and our commonalities. We used television shows, movies, classes, community forums, and personal relationships to try to gain better understanding and move forward together. Some of that effort was naive, but most of it was sincere.

Those days are gone. Now we see black athletes who are so frustrated that they show disrespect to the American flag to draw attention to the unresolved issues in the black community, and we see black people who assert that anyone who opposes that action is a racist. And we see white people who say that anyone who supports what those athletes have done is anti-American without making any effort to understand the source of the underlying frustration that led to those actions.

I’m as guilty as anyone. I have treated people who dissented from my views with condescension. I have reacted in anger at things said and actions taken by people “on the other side.”

I am far from perfect, but I am trying.

Unfortunately, we cannot look to our national leaders to guide us out of this morass. Our elected representatives do indeed represent what we as a society have become. We have a president who is a product and leader of the very close-minded anger and finger-pointing that is dividing the country, and we have leaders in the other party who spread malicious lies to discredit him and his supporters as “Nazis” and “white supremacists.”

In days past, we were blessed with moral leaders to help unite and guide us to be our best. We had a George Washington, an Abraham Lincoln, an FDR, an Eleanor Roosevelt, a JFK, a Martin Luther King, a Ronald Reagan.

Today we have a vacuum of moral leadership. So, we must take on the job ourselves. We must decide, each one of us, to resist the temptation to stay in a bubble isolated from other points of view. We must resolve to clamp our mouths shut in the face of dissent and force open our ears and our hearts to sincerely consider other points of view. We must strive to admit when we’re wrong and be humble and respectful when we believe we’re right. We must choose to give others the benefit of the doubt that their motivations are as upstanding as our own.

Then, and only then, can we realize the world envisioned by President Lincoln when he said in his first inaugural address,

We are not enemies, but friends. We must not be enemies. Though passion may have strained it must not break our bonds of affection. The mystic chords of memory, stretching from every battlefield and patriot grave to every living heart and hearthstone all over this broad land, will yet swell the chorus of the Union, when again touched, as surely they will be, by the better angels of our nature.