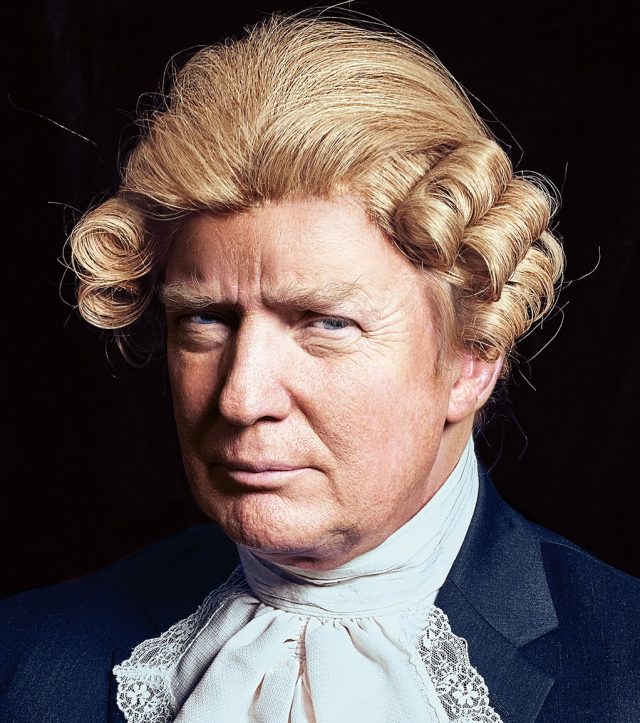 Private citizen Trump railed against DACA and illegal immigration.  He called DACA unconstitutional.  Candidate Trump promised to end illegal immigration, build a wall, and put America first.  President Trump just extended DACA protections for up to two and a half years, and he promised that DACA eligible aliens would be nearly free from deportation after the extensions run out.  People are calling him mean, cruel, and heartless. Sixteen states just sued him. I say Mr. Trump introduced us to what might best be described as Compassionate Federalism.

Critics from the left and open-borders right should throw Trump a ticker-tape parade.

His position as President is quite far to the left of his position as a private citizen and political candidate.  Indeed, if DACA was unconstitutional, shouldn’t he have ended it on his first day in office?  If Mr. Trump is putting Americans first, and he is stopping illegal immigration, why is he extending DACA and promising not to pursue violators for deportation after it ends?

What would immigrant advocates and business-centric, open-borders lobbyist have done if Mr. Trump just blindly kept his political promises?

Good governance and political sanity make strange bedfellows.  Fortunately, the responsibility to govern sometimes keeps in check the urges of political purists and reactionaries.  Mr. Trump isn’t known for impulse control, yet in his DACA decision moderation is his mistress.  His policy is a shocking act of political restraint. Rather than check off a campaign promise completely within his control; his administrative state will be issuing up to 700,000 two-year DACA extensions for the next six months.

Until March of 2020, the Trump Administration will be acting exactly like the Obama administration on DACA, and yet people are mad as heck about it. That’s anti-Trumpism in its purest form.

If I were an open-borders advocate on either side of the isle, I’d be tickled-pink by Trump’s compassionate federalism. As a conservative, I am not quite as enthusiastic. As a frequent Trump critic, I find myself a bit at odds defending him for his unpopular action against criticism from those least grateful for his retreat.

For all of those (DACA) that are concerned about your status during the 6 month period, you have nothing to worry about – No action!

The limited-government, constitutional conservative in me wants to end Mr. Obama’s unconstitutional gambit into expanding executive power right now.  I am neither impressed nor moved by the legal analysis that excuses or justifies Mr. Obama’s executive action.  On the left and right, a poisonous infection of results-oriented politics drives each analysis.  On the right, mental gymnastics from scholars tied to business interest often confound me.  It is painful to watched so-called conservatives and federalists carve out exceptions for expanding federal, executive power at the expense of legislative authority.

Refracted political colors distort our national political phenomenology.  The razor sharpness of legal analysis is now dulled by our party system and polluted by fidelity to special interests.  Everyone is on a team, and the only thing that matters is that their team wins.  It’s past troubling.  It’s dangerous and corrosive.

We need to be team America again.

Into the breach steps Mr. Trump, a President I once described as zero-parts conservative.  He resists the urge to end DACA immediately and claim a “political” win.  Yet, he does end it, and in so doing sets the path for Congress to do its job.  In ending DACA by applying the brakes slowly, deploying chutes and airbags, Trump creates a soft, compassionate landing for those caught between his campaign rhetoric and his responsibility to govern.  Is President Trump America’s compassionate Federalist?

Presidents rarely look for a way to limit their own power.  By doing that, Mr. Trump places his footprint on the ground of real, constitutional, conservatism.  Indeed, with none of the rhetoric of Reagan, but with clear action, Trump has handed conservatives two real wins.  First, he gave us Gorsuch.  Now, he has struck from the administrative books executive tyranny.  He trimmed an executive edict and placed in the hands of Congress the power and obligation to legislate.

This version of Trump could be President … if we got only this version.

Trump is “ending” DACA, and the clock now ticks for Congress to do its job and make laws. Imagine that.  Congress makes laws and the executive enforces them.  Who ever dreamed up such a system?

For those calling Mr. Trump cruel or heartless, they don’t even understand what he has done.  He has restored order in the name of federalism, which works in a federal republic.  How does it work?  We make laws.  We do it through debate, compromise, and negotiation.  When we do that, we don’t get everything our “side” wants.  We get the change and laws the republic can bear based on shared sacrifice and compromise.

Of course, Trump hinted the very next day that he might be a big government, non-federalist, interventionist too, if this all doesn’t work out.

Congress now has 6 months to legalize DACA (something the Obama Administration was unable to do). If they can't, I will revisit this issue!

Maybe what we have is an aspiring, rookie, compassionate federalist?  We will see. However, for now, the debate moves to Congress, where it belongs.  There, we all have a voice.

No immigration reform package is ever going to look like I drafted it.  It isn’t going to look like La Raza drafted it.  Political purists and doctrinaire hardline have arguments to make, and my argument to change all the incentives really is superior.  However, legislation is passed through honest, hard, compromise.  Laws made by a judge or judges, or a law made by a single President reflects a single ideology, devoid of compromise.  That’s why making them outside the legislative process increases agitation and anger on the losing side.

Trump has, on this discreet issue, returned us to federalism.  He has given Congress a chance to make law.  Let’s see if they can resist the urge to instead make an election issue. I doubt it.

Mr. Trump is never going to get credit from those who have converted their anti-Trumpism into blind, political hatred. This conservative, anti-Trump critic thinks the President handled this matter expertly.  Of course, that could change tomorrow with a new Tweet.  He has earned some conservative street credibility, and he introduced Americans back to the promise and responsibility of federalism.  In so doing, Mr. Trump showed a little justified compassion.

You are up Congress.