How can people see things so differently?  Sadly, many people don’t think before simply reacting politically.  Some of this Trump confusion is related to Trump’s cult of personality, but most of it stems from America’s partisan, bunker mentality.  One is either on one team or another.  It’s red v. blue.

I’m on America’s team. We are red, white, and blue.

The obvious Trump haters live among the resistance movement.  Consumed by hate, wallowing in political zealotry, and fueled by the politics of division and identity, these people are predictable haters.

If you have a President, there is always a group of haters.  Mr. Obama, Mr. Bush, and Mr. Clinton can testify to that fact. Reagan won 49 states, and his haters were just as passionate.  They just didn’t have social media.

Recently, the “I hate Trump for living” crowd was attacking him for donating 1 million dollars, which they say he will never give.  I pointed out that the man was due credit for giving, and that we ought not be playing politics with Harvey.  I tweeted back this meme I so skillfully made (Not): 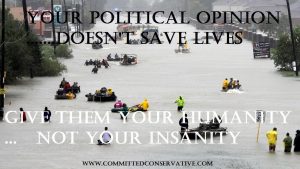 In response, this devoted Trump hater from the resistance wrote back to me and said:

Joy is calling out Trump's politicizing of Harvey. Your cult hates & disdains anyone that calls out Trump's lies.

This sad episode was not the inspiration for this piece.  It’s just an easy example of the raw emotion and ignorance that echoes in our society and across Al Gore’s internet.  Heck, this one happened while I was first drafting this piece.

Any defense of any Trump action will draw out a Trump hater, and that hater will always peg any person making a Trump defense as a Trump lover.  Absolutism is the default of the intellectually weak and dishonest.  Absoluters are blinded by political religion, and they often scream at each other through a great political wall that separates them based on politics, knowledge, and the ability to think.  (Not to mention the desire to do so.)

This poor soul below is so lost in the hate she thinks defending Mr. Trump for his charitable pledge is akin to defending Nazis in Germany.  When your ignorance, hate, and stupidity has metastasized to this level, it is your humanity that is terminally ill.  Put down the internet, step back, breathe, and read a book or 20.

There were people in Germany that defended Hitler's propaganda, too.

Resistance haters are irredeemable political souls.  It’s useful to know they exist. When willful ignorance sets up an estate at the corner of stupid and angry, that’s a piece of property about which it is worthy to alert the neighborhood watch.

The more curious politically inspired Trump hate comes from those who self-identify as team red.  I call them cafeteria conservatives.  They pick and choose the principles of conservatism that serve them best, and discard or ignore the rest.

Conservatives don’t have a side or a party … they have a country and principles.  We are on America’s side.  But some self-described “conservatives” are a full partner in the war on Trump.  That’s unusual, if only because Trump presents them with a person with whom they should have much political common cause on policies.

Let me say this plainly too; conservatives who rightly criticize Trump are conservatives, and they are not Trumpers.

Conservatives recognize the difference between applying conservative principle and standards to conduct and policies, versus blind, ignorant, hatred.  Likewise, conservatives don’t have false idols or prophets.  That we may have common cause with Mr. Trump on some issues, or that we may work to help him advance our ideas and ideals, doesn’t mean we follow him blindly like fools.  Nor does it mean we can or will excuse his actions, conduct, and policies that are not one-bit conservative. Those are many.

That’s not hyperbole, they quite literally profit from it.  Their livelihood is politics, and their niche is anti-Trumpism.  Rick Wilson is a great example of this.  I rather like Mr. Wilson.  I follow him, and the politically-minded ought to do so as well.  I agree with many of his ideas and thoughts on politics and policy.  Like Mr. Wilson, I wanted Mr. Rubio.  Like him, I did not want Mr. Trump as the candidate for the Republican party.  My guy was some fellow named “Mattis.”  Sometimes we don’t get our guy or gal, and then we have to work as responsible citizens to govern … and where possible reach an accord.

I think the President needs to donate Trump hotel properties as relocation centers.

Ironically, Trump rose to power being outrageous at times for its own sake.  Mr. Wilson doesn’t like Mr. Trump, but he can be Trumpian too.

You could criticize Trump but…oh wait, you can't because you sold your virtue cheaper than two dollar crack whore. https://t.co/IinegpkqGS

The difference between me and Mr. Wilson is that he is out to destroy Trump.  I am not.  Make no mistake, he really hates Trump.  However, self-interest also drives his engineered outrage.  I don’t make money off my pontificating, maybe if I did it would force me to choose a “side.”  I hope not.

In fact, I know through analytics that if I chose one side and went all in on either, I would gain more followers and garner more clicks, should I choose to monetize.  I don’t do it.  Why?  That’s not the purpose of our site.  Indeed, the purpose of this site is to reclaim and properly define conservatism so that cafeteria conservatives don’t hijack our principles and mislabel us.

I am out to make America a better place to live for all Americans.  Bringing down a President out of hate does not accomplish that for me.  I’d rather use my conservatism to move this President toward common goals, if possible. I also recognize that a weak President weakens America and threatens our security, safety, and economic prosperity.

The anti-Trump hate on the right is not confined solely to displaced insiders. However, from Bill Kristol to Jennifer Rubin, David Frum, team Bush, the phony, puppet, Evan McMullin, and across the spectrum of establishment, cafeteria conservatives, anti-Trump hate on the right is fueled, promoted, and encouraged by those attracted to their darker angels. Many of their criticisms of Trump are firmly planted in reality.  Some are not.

The only foreign born people Trump 'loves' are Russians

Cafeteria conservatives have converted conservatism to merely being an anti-Trump chest-beating, Trumpertantrum.

Conservatism is so much larger than that.  Just as they rightly criticize a Trump supporter for blind allegiance and an effort by some Trump sycophants to convert conservatism to an anti-government, anti-media, cynicism, so too are these souls lost in the jungle of hate.

No. It's that I know Trump will fail because he's not a conservative. He has never been. It was a flag of convenience. https://t.co/eRIb7IXI0A

Mr. Wilson is correct in his tweet above.  I am correct in my paragraphs above that.

Responsible citizenship and real conservatism require optimism, not blind allegiance.  They demand healthy skepticism, not sick cynicism.  Citizenship and conservativism also require that we reject hate … political, racial, religious, or any other type of hate for its own sake.

It is true.  You can defend Trump and not be a Trump supporter or voter.  You can criticize Trump and be a Trump voter, a conservative, or even a person who cheerleads for him.

Hating Trump is an irresponsible political religion.  Criticizing a President responsibly, on principle, is a civic duty.