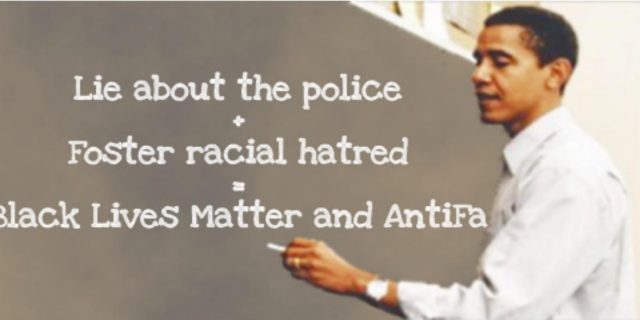 He was President for 6 months when Mr. Obama said, “The Police Acted Stupidly.”  From a fateful day, in his tone and by his deeds, Mr. Obama gave birth to the rage that feeds and fuels Black Lives Matter and AntiFa in Obama’s War on Police.

On July 21, 2009, Cambridge, Massachusetts police responded to a 9-1-1 report of breaking and entering into a home. That home belonged to Harvard University professor Henry Louis Gates, Jr.  The 9-1-1 caller witnessed Gates and another man forcing their way into a jammed door. The caller did not know who either man was at the time of the call.

Responding officer Sgt. James Crowley encountered Gates at the door and asked him to step outside.  He asked him as well for ID to verify he was the resident of the house. Gates responded to Crowley belligerently and confrontationally.  Gates immediately accused the responding officer answering a 9-1-1 call of racial bias.  Gates was undeterred.  Officer Crowley warned Gates that he was becoming disorderly, but Gates ignored the warnings. He persisted. After a second warning went unheeded, Crowley proceeded to arrest Gates for disorderly conduct.

It is an all too common event where an uncivil society meets our peace officers with anything but peace.  The officer was only there because a fellow citizen called 9-1-1 to report suspicious conduct.  That suspicious conduct the caller witnessed was two men forcing their way into a home.  Yes, it was Gates’s home.  But, neither the caller nor the responding officer knew that at the time.  Instead of allaying the officer’s fears, Mr. Gates played the race card.

Professor Gates and President Obama are friends. They are fellow comrades in Obama’s war on police. They are radicals and fellow travelers in the society of victimization.  When the media questioned the President about the event, he immediately set the tone of accusation, recrimination, suspicion, and distrust … all predicated on the sad disease of racial politics.  Here is what he said:

“Now, I’ve – I don’t know, not having been there and not seeing all the facts, what role race played in that. But I think it’s fair to say, number one, any of us would be pretty angry; number two, that the Cambridge police acted stupidly in arresting somebody when there was already proof that they were in their own home. And number three, what I think we know separate and apart from this incident is that there is a long history in this country of African-Americans and Latinos being stopped by law enforcement disproportionately. That’s just a fact.”

Gates wasn’t stopped as part of this bogus disproportionality charge made by Mr. Obama.  An American called the police because Gates was breaking into his own house.  That’s how the officer got there.  Mr. Obama, however, saw an opening to insert his world view of racism where it did not belong, just like his friend did when he unloaded his racial hate on the officer.

When the leader of the free world sides with the criminals and the anti-police factions of society, those members of society rejoice and organize in ways that create the dangerous hate groups we see today.

The normalization of baseless, unfair, race-based criticism as fact gave birth to a series of anti-police movements. Those movements grew from embryos of discontent into warriors of rage and hate.  That type of ignorance grows fast and spreads wildly.

Racial rage and radicalism created the lawlessness and murder of police like we saw in Dallas in 2016.  It is responsible for the ambush murders in New York City and across the nation for the last few years. There have always been anti-police idiots and (false) claims of institutionalized racism aimed at law enforcement. But Barack Obama organized this community (being the community organizer he is) with outrageous claims of the police acting “stupidly.”  He normalized the radicalism on a false charge and then suggested “any of us would be pretty angry.”

No, actually, most reasonable people would understand why the police showed up and simply cooperate with them.  Then, they would thank them.  Instead, Mr. Obama gave cover for anyone’s anger when they interact unexpectedly with police.  He also stated as fact that racism is the cause behind African-Americans and Latinos being stop by police “disproportionately.”  Indeed, they are stopped perfectly proportional to the crime they commit.

Six months into Obama’s presidency he had an opportunity to make a real difference regarding race relations in our country.  He passed.

Mr. Obama had an opportunity to shut down all the illegitimate talk of racial profiling by making clear it was not present in this case.  He could have praised law enforcement for doing their job. He could have taken a moment to engage all of America with facts, rather than fears.

He might have taught us that Sgt. Crowley was chosen by his black police commissioner at the time to serve as an instructor for a police academy course entitled “Racial Profiling.”  It was a course Crowley has taught since 2004, aimed at combating the very complaints people like Mr. Gates make so easily.  Obama could have noted that as a campus police officer at Brandeis University in 1993, Crowley gave mouth-to-mouth to Boston Celtics star Reggie Lewis after he suffered a fatal heart attack. Obama could have noted that Sgt. Leon Lashley, a black police officer present at Gates’s arrest, supported Crowley’s actions 100%.

Instead, America got false facts, bogus allegations, and a lifetime of contempt from Mr. Obama … in one simple and false statement, “the police acted stupidly.”

Obama blew his radical dog-whistle to let the mob know that when they are stopped, it’s probably illegitimate.  Instead of giving facts in a real “teachable moment,” he fed the lie that police disproportionately stop African-Americans simply because they are black.  All those statements Obama designed to organize and incubate hatred and distrust, because that was the politics on which he was raised.

Barack Obama knew exactly what he was doing.

Mr. Obama gave life to Black Lives Matter and AntiFa.  He made the bastard children of hate his legitimate offspring.

Even after Obama’s remarks, he had an opportunity to reflect and apologize for his mistake. He did not. He opted to put on a show and hold a “Beer Summit” to create a “teachable moment” for “both sides.”

Mr. Obama made the “both sides” argument when there was only one side.  The media loved him because it was their side.

Unfortunately, Mr. Obama taught nothing but hate and distrust, something he learned to profit from politically.  The president should have investigated the incident and given a news conference, saying that he was wrong to say that the police acted stupidly. Obviously, that was not his agenda. His agenda was to create and highlight racial divides, and he maintained that agenda throughout his entire two terms. Barack Obama left our nation damaged in so many ways.  America doesn’t yet fully understand his legacy of hate.

I hope the recent recognition by democrats and some members of the media that AntiFa is an anti-American group that promotes violence is a positive step against hate. Black Lives Matter should be called out, as well. The children of leftist hate can no longer seek shelter behind the man who birthed them into a civil society.

I expect AntiFa will reorganize, rebrand, and reappear as something else.  Fortunately, for most of us, hate has no mask behind which it can hide from the civil society.

Rick Canton is a local and national conservative political activist who has written for numerous websites and volunteered his time to help conservative causes and candidates. Extremely active on social media, he’s a first generation American, born of Cuban parents.  He has worked in law enforcement and national security for nearly 30 years, and is a father to 3 daughters.